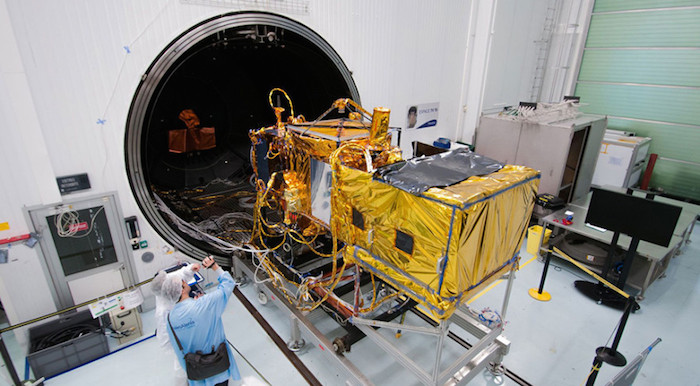 Jason-3, shown here entering thermal vacuum tests, is ready to head to Vandenberg after Thales Alenia Space determined that its contaminated thruster was nothing to worry about. Credit: Thales Alenia Space
.
PARIS — The French Jason-3 ocean-altimetry satellite will be shipped to Vandenberg Air Force Base in California June 18, in time for a late-July/early-August launch aboard a SpaceX Falcon 9 rocket following a nine-day delay that turned out to have been unnecessary, French space agency, CNES, officials said June 9.
The satellite, which is part of a U.S.-European program dating from the early 1990s and now used by 10,000 researchers in 160 nations, missed its scheduled July 22 launch following a late-April discovery of contamination in one of its four thruster motors.
The discovery was made during the final test of the satellite before being put into a container and made ready for the flight, by an Antonov aircraft, from France to Vandenberg. With too many questions raised about the nature and origin of the contamination, CNES and prime contractor Thales Alenia Space elected to remove and replace the contaminated motor and subject the other three to a fresh round of testing.
The result: Small salt deposits, probably formed from traces of hydrazine fuel from the last time the thruster was test fired in 2004, remained following an incomplete cleaning.
None of the other motor nozzles had the same problem.
In a June 9 press briefing at CNES headquarters here, CNES’s Jason-3 project manager, Gerard Zaouche, said it took the investigators time to determine that the contamination was a salt likely formed following a chemical reaction with traces of hydrazine fuel that was left in the nozzle.
“This nozzle had been only partially decontaminated,” Zaouche said, adding that even if it had been undetected the satellite’s performance would not have been affected. “The contamination was a kind of salt that would have disappeared in the presence of hydrazine,” he said.
To meet its July 22 launch date, Jason-3 would need to have been shipped by June 8. Resolving the contamination issue and then ordering a new Antonov – which takes off not from Thales Alenia Space’s Cannes, France, facility but from the more Antonov-adapted airport of Marseille – accounts for the nine-day delay.
Jason-3 is already about two years late, in part because of budget-commitment delays at the U.S. National Oceanic and Atmospheric Administration, which is financing the launch aboard SpaceX’s Falcon 9 v1.1 rocket.
The delays have stressed some Jason users because the Jason-2 satellite is already well past its scheduled retirement date and many users require uninterrupted measurements over long periods to derive maximum benefit from the data. Jason-2 has remained healthy.
The Intergovernmental Panel on Climate Change, which regularly produces assessments of global warming and other climate phenomena, included Jason ocean-altimetry data into its list of essential climate variables only since 2014, because it wanted to have a long, unbroken flow of data starting with the U.S.-French Topex-Poseidon satellite launched in 1992, said Sophie Coutin-Faye, head of CNES’s altimetry division.
Jason-3 is a nearly identical copy of the Jason-1 and Jason-2 satellites launched in 2001 and 2008 as part of a program that began as a NASA-CNES collaboration and now includes the U.S. and European meteorological satellite agencies and counts civil government, military and commercial users worldwide.
In addition to the Jason satellite series, the European Union is launching sensors on its Sentinel Earth observation satellites that will complement Jason, and China has a satellite in orbit that carries an ocean altimeter calibrated using Jason as a reference.
The 10,000 registered users of Jason data are most heavily concentrated in the United States, France, China and India, according Coutin-Faye said. France and India have launched a joint satellite, called AltiKA, using a Ka-band altimeter.
The European Union and the European Space Agency are planning to launch two Jason follow-ons as part of Europe’s Copernicus environment-monitoring program. Europe’s 30-nation meteorological satellite agency, Eumetsat of Darmstadt, Germany, is scheduled to join this effort, called Jason-CS, following a June 23 meeting of its ruling council to collect individual nations’ subscriptions.
With the Jason series now on firm long-term footing, CNES and NASA are turning their attention to a more-challenging research mission called Surface Water Ocean Topography (SWOT), to be launched around 2020.
More powerful – seven kilowatts of power compared to 500 watts for the Jason series – and capable of measuring not only oceans but lakes and rivers as wel, SWOT has a cost to match. NASA is paying about two-thirds of the estimated 1.2 billion euros ($1.4 billion) in SWOT costs, including launch and five years’ operations, with CNES paying the remaining third.
Jason-3, in contrast, cost about 290 million euros including five years’ operations.
Quelle: SN
Raumfahrt
« Zum vorherigen Eintrag Zum nächsten Eintrag »
2077 Views
Created with page4