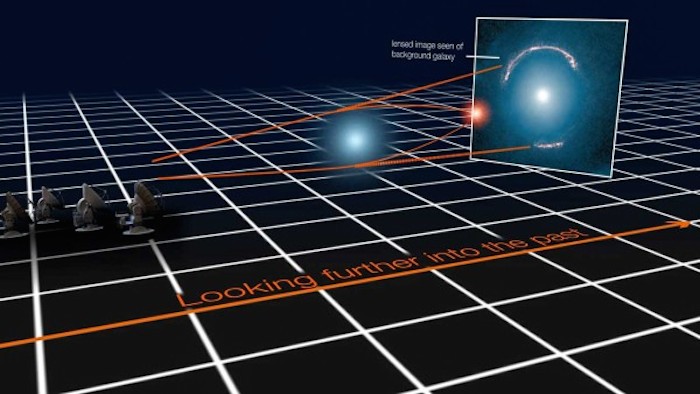 Some galaxies are so distant that they appear only as featureless points of light to observers on Earth. But thanks to another closer galaxy acting as a magnifying lens, astronomers have been able to see star-forming regions in one such distant galaxy—known as SDP.81—dating to 2.4 billion years after the big bang. This is the most detailed image obtained of a galaxy that far back in the universe’s history. Directly in line between SDP.81 and Earth is another galaxy, the gravity of which bent the light from SDP.81 in a way similar to how a lens magnifies objects. Viewed from Earth, the magnified galaxy appears as a circle, known as an Einstein ring. But using data from the Atacama Large Millimeter/submillimeter Array (ALMA) recorded late last year, seven groups of astronomers have reconstructed a true image of SDP.81, which, although hazy, looks much more like a galaxy. Their work was helped by ALMA’s exceptional resolution. The array is made up of 66 radio telescope dishes high on a plateau in the Atacama Desert of northern Chile. ALMA combines signals from all the dishes to see much finer details, and for these observations the movable dishes were spaced out to their maximum extent—some 15 kilometers—to achieve a resolution six times better than the Hubble Space Telescope can see in infrared light. In eight papers posted online on the arXiv preprint server, the astronomers describe how they were able to estimate SDP.81’s mass, measure its rotation, and see clumps of gas collapsing inwards. Most notably, they could see large dusty clouds thought to contain cold molecular gas, just the sort of place where stars and planets are born—akin to the Orion Nebula in our Milky Way galaxy.
Quelle: AAAS
Astronomie
1919 Views
Created with page4