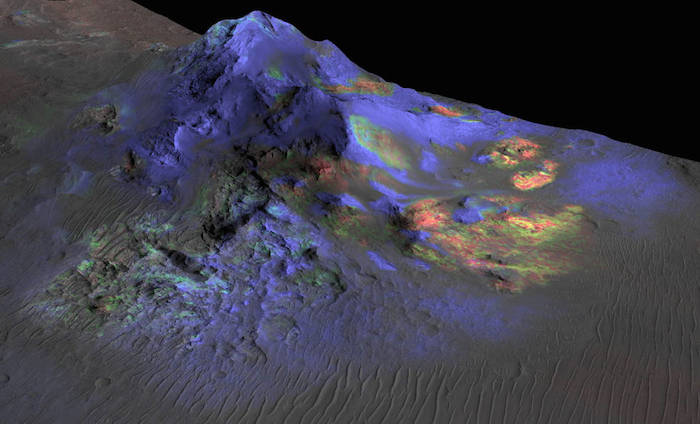 Researchers have found deposits of impact glass (in green) preserved in Martian craters, including Alga Crater, shown here. The detection is based on data from the instrument Compact Reconnaissance Imaging Spectrometer for Mars (CRISM) on NASA's Mars Reconnaissance Orbiter.
Credits: NASA/JPL-Caltech/JHUAPL/Univ. of Arizona
.
NASA's Mars Reconnaissance Orbiter (MRO) has detected deposits of glass within impact craters on Mars. Though formed in the searing heat of a violent impact, such deposits might provide a delicate window into the possibility of past life on the Red Planet.
During the past few years, research has shown evidence about past life has been preserved in impact glass here on Earth. A 2014 study led by scientist Peter Schultz of Brown University in Providence, Rhode Island, found organic molecules and plant matter entombed in glass formed by an impact that occurred millions of years ago in Argentina. Schultz suggested that similar processes might preserve signs of life on Mars, if they were present at the time of an impact.
Fellow Brown researchers Kevin Cannon and Jack Mustard, building on the previous research, detail their data about Martian impact glass in a report now online in the journal Geology.
“The work done by Pete and others showed us that glasses are potentially important for preserving biosignatures,” Cannon said. “Knowing that, we wanted to go look for them on Mars and that’s what we did here. Before this paper, no one had been able to definitively detect them on the surface.”
Cannon and Mustard showed large glass deposits are present in several ancient, yet well-preserved, craters on Mars. Picking out the glassy deposits was no easy task. To identify minerals and rock types remotely, scientists measured the spectra of light reflected off the planet’s surface. But impact glass doesn’t have a particularly strong spectral signal.
“Glasses tend to be spectrally bland or weakly expressive, so signature from the glass tends to be overwhelmed by the chunks of rock mixed in with it,” said Mustard. “But Kevin found a way to tease that signal out.”
In a laboratory, Cannon mixed together powders with a similar composition of Martian rocks and fired them in an oven to form glass. He then measured the spectral signal from that glass.
Once Mustard had the signal from the lab glass, he used an algorithm to pick out similar signals in data from MRO’s Compact Reconnaissance Imaging Spectrometer for Mars (CRISM), for which he is the deputy principal investigator.
The technique pinpointed deposits in several Martian crater central peaks, the craggy mounds that often form in the center of a crater during a large impact. The fact the deposits were found on central peaks is a good indicator that they have an impact origin.
Knowing that impact glass can preserve ancient signs of life -- and now knowing that such deposits exist on the Martian surface today -- opens up a potential new strategy in the search for ancient Martian life.
“The researchers’ analysis suggests glass deposits are relatively common impact features on Mars,” said Jim Green, director of NASA’s planetary science division at the agency’s headquarters in Washington. “These areas could be targets for future exploration as our robotic scientific explorers pave the way on the journey to Mars with humans in the 2030s.”
One of the craters containing glass, called Hargraves, is near the Nili Fossae trough, a 400-mile-long (about 650-kilometer-long) depression that stretches across the Martian surface. The region is one of the landing site contenders for NASA’s Mars 2020 rover, a mission to cache soil and rock samples for possible return to Earth.
Nili Fossae trough is already of scientific interest because the crust in the region is thought to date back to when Mars was a much wetter planet. The region also is rife with what appear to be ancient hydrothermal fractures, warm vents that could have provided energy for life to thrive just beneath the surface.
“If you had an impact that dug in and sampled that subsurface environment, it’s possible that some of it might be preserved in a glassy component,” Mustard said. “That makes this a pretty compelling place to go look around, and possibly return a sample.”
MRO has been examining Mars with CRISM and five other instruments since 2006.
"This significant new detection of impact glass illustrates how we can continue to learn from the ongoing observations by this long-lived mission," said Richard Zurek, MRO project scientist at NASA's Jet Propulsion Laboratory (JPL) in Pasadena, California.
The Johns Hopkins University Applied Physics Laboratory in Laurel, Maryland, provided and operates CRISM. JPL manages MRO for NASA's Science Mission Directorate in Washington. Lockheed Martin Space Systems in Denver built the orbiter and supports its operations.
Quelle: NASA
. 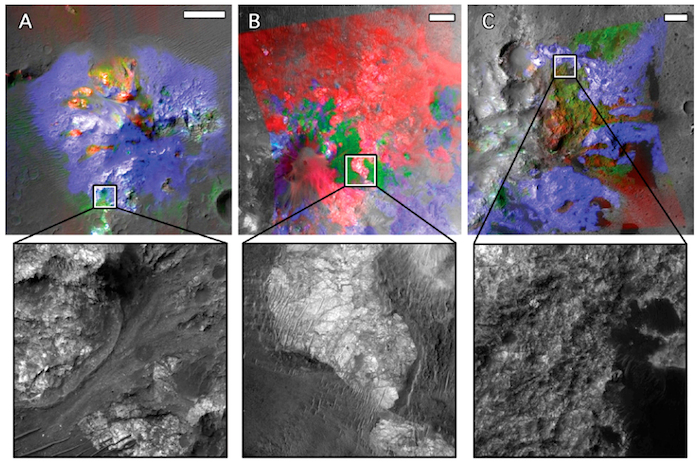