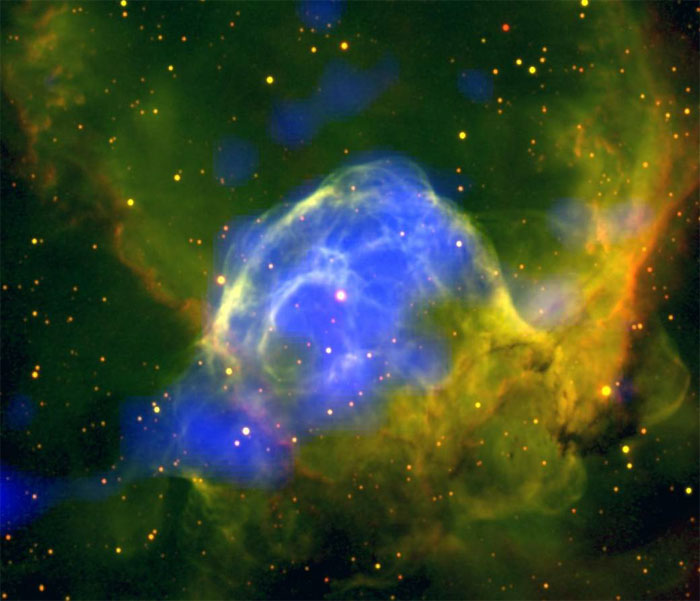 Thor's hammer Mjolnir isn't the only awesome thing about the mythical Norse god. He also has a pretty cool helmet. This photo from the European Space Agency shows the Thor's Helmet nebula, also known by the less colorful name of NGC 2359.
It's actually a composite of two images. The bright blue comes from X-ray emissions captured by cameras on the ESA's XMM-Newton space observatory, which has been orbiting Earth since 1999. The red and green are ionized hydrogen and oxygen, as recorded by the Cerro Tololo Inter-American Observatory in northern Chile.
The source of those bright X-ray emissions? No, it's not the magical realm of Asgard. In the middle of the nebula is a massive Wolf-Rayet star called HD 56925 that is losing mass at an incredible rate. In space winds moving faster than 900 miles per second, it's losing the equivalent of our sun every 100,000 years.That makes Thor's Helmet hotter than a battle during Ragnarök, with temperatures ranging from several millions to tens of millions of degrees.
Quelle: NBC
Astronomie
« Zum vorherigen Eintrag Zum nächsten Eintrag »
2374 Views
Created with page4