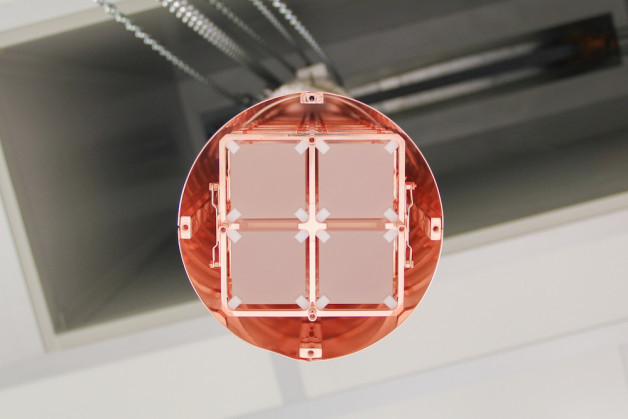 For Ultra-cold Neutrino Experiment, a Successful Demonstration
An international team of scientists releases early results from the CUORE experiment with implications for why there’s more matter than antimatter in the universe.
.
Today an international team of nuclear physicists announced the first scientific results from the Cryogenic Underground Observatory for Rare Events (CUORE) experiment. CUORE, located at the INFN Gran Sasso National Laboratories in Italy, is designed to confirm the existence of the Majorana neutrino, which scientists believe could hold the key to why there is an abundance of matter over antimatter. Or put another way: why we exist in this universe.
The results of the experiment, called CUORE-0, were announced at INFN Gran Sasso Laboratories (LNGS) in Italy, the U.S. Department of Energy’s Lawrence Berkeley National Laboratory (Berkeley Lab), and at other institutions in the US.
The findings are twofold. First, the CUORE-0 results place some of the most sensitive constraints on the mass of the elusive Majorana neutrino to date. With these new constraints, the CUORE team is essentially shrinking the size of the haystack that hides the Majorana needle, making it much more likely to be found.
Second, the experiment, successfully demonstrates the performance of CUORE’s novel design—a detector made of towers of Rubik’s cube-sized crystals of tellurium dioxide. These towers are placed in a high-tech refrigerator that has been painstakingly decontaminated, shielded from cosmic rays, and cooled to near absolute zero.
Today’s results represent data collected over two years from just one tower of tellurium dioxide crystals. By the end of the year, all 19 towers, each containing 52 crystals, will be online, increasing CUORE’s sensitivity by a factor of 20.
“CUORE-0 is so far the largest detector operating at a temperature very close to absolute zero,” says Dr. Oliviero Cremonesi of INFN-Milano Bicocca, spokesperson for the CUORE collaboration. “CUORE is presently in its final stages of construction, and when completed, it will study the nuclear processes associated with the Majorana neutrino with unprecedented sensitivity.”
“With the CUORE-0 results, we’ve proven that our experimental design, materials, and processes, which include extremely clean surfaces, pure materials, and precision assembly, are paying off,” says Yury Kolomensky, senior faculty scientist in the Physics Division at Berkeley Lab, professor of physics at UC Berkeley, and U.S. spokesperson for the CUORE collaboration.
Annihilations in the Early Universe
To pin down the Majorana neutrino, the researchers are looking for a telltale indicator, a rare nuclear process called neutrinoless double-beta decay. This process is expected to occur infrequently, if at all: less than once every septillion (a trillion trillion, or, a 1 followed by 24 zeros) years per nucleus.
Unlike regular double-beta decay, which emits two anti-neutrinos, neutrinoless double-beta decay emits no neutrinos at all. It’s as if one of the anti-neutrinos has transformed into a neutrino and cancelled—or annihilated—its sibling inside the nucleus.
“In 1937, Ettore Majorana predicted that neutrinos and anti-neutrinos could be two manifestations of the same particle – in modern language, they are called Majorana particles,” says Reina Maruyama, assistant professor of physics at Yale University, and a member of the CUORE Physics Board, which guided the analysis of the data. “Detecting neutrinoless double-beta decay would lead us directly to the Majorana particle, and give us hints as to why the universe has so much more matter than antimatter.”
Known laws of physics forbid such matter-antimatter transformations for normal electrically charged particles like electrons and protons. But neutrinos, which are electrically neutral, may be a special kind of matter with special capabilities.
The proposed matter-antimatter transitions, while extraordinarily rare now, if they happen at all, may have been common in the universe just after the big bang. The remainder of existence, then, after all the annihilations, would be the matter-full universe we see today.
. 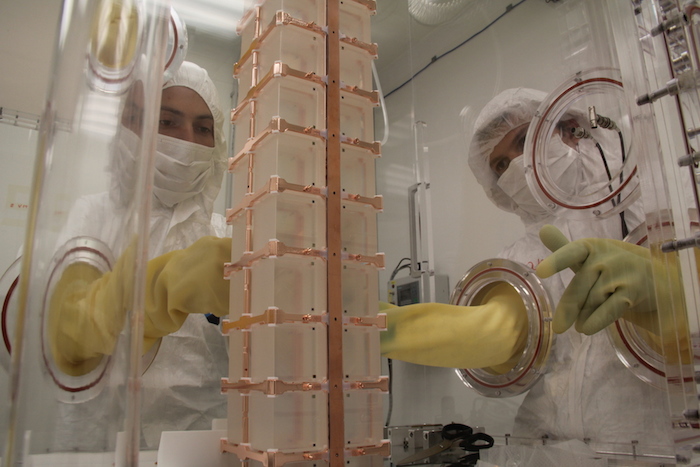 Tower assembly. Credit: CUORE Collaboration
.
Crystal Clarity
The CUORE crystals of tellurium dioxide are packed with more than 50 septillion nuclei of tellurium-130, a naturally occurring isotope that can produce double-beta decay and possibly neutrinoless double-beta decay. For the experiment, the crystal towers sit in an extremely cold refrigerator called a cryostat that’s cooled to about 10 milliKelvin or -273.14 degrees Celsius. Last year, the CUORE cryostat set a record for being the coldest volume of its size.
In the very cold CUORE crystals, presence of both nuclear processes would produce small but precisely measured temperature rises, observable by highly sensitive temperature detectors within the cryostat. These temperature increases correspond to spectra—essentially the amount of energy given off—from the nuclear event. Two-neutrino double-beta decay produces a broad spectrum. In contrast, neutrinoless double-beta decay would create a characteristic peak at the energy of 2528 kiloelectron-volts. This peak is what the researchers are looking for.
The CUORE experiment sits about a kilometer beneath the tallest mountain of the Apennine range in Italy, where rock shields it from cosmic rays. This location, as well as the experimental design, enables the sensitivity required to detect neutrinoless double-beta decay.
“The sensitivity demonstrated by the results today is outstanding,” says Stefano Ragazzi, director of the INFN Gran Sasso National Laboratories. “The INFN Gran Sasso Laboratories offers a worldwide unique environment to search for ultra-rare interactions of Majorana neutrinos and dark matter particles and is proud to host the most sensitive experiments in these fields of research.”
“While there’s no direct evidence of the Majorana neutrino yet, our team is optimistic that CUORE is well positioned to find it,” says Ettore Fiorini, professor emeritus of physics at the University of Milano-Bicocca and founding spokesperson emeritus of the experiment. “There is a competition of sorts, with other experiments using complementary techniques to CUORE turning on at about the same time. The next few years will be tremendously exciting.”
CUORE is supported jointly by the Italian National Institute for Nuclear Physics Istituto Nazionale di Fisica Nucleare (INFN) in Italy, and the Department of Energy’s Office of Science and the National Science Foundation in the US. The CUORE collaboration is made of 157 scientists from Italy, U.S., China, France, and Spain, and is based in the underground Italian facility called INFN Gran Sasso National Laboratories(LNGS) of the INFN.
U.S. CUORE team was lead by late Prof. Stuart Freedman until his untimely passing in 2012. Other current and former Berkeley Lab members of the CUORE collaboration not previously mentioned include US Contractor Project Manager Sergio Zimmermann (Engineering Division), former US Contractor Project Manager Richard Kadel (Physics Division, retired), Prof. Eugene Haller (UCB and Materials Science Division), staff scientists Jeffrey Beeman (MSD), Brian Fujikawa (Nuclear Science Division), Sarah Morgan (Engineering), Alan Smith (EH&S), postdocs Jacob Feintzeig (NSD). Raul Hennings-Yeomans (UCB and NSD), Ke Han (NSD, now Yale), Yuan Mei (NSD), and Vivek Singh (UCB and NSD), graduate students Alexey Drobizhev and Sachi Wagaarachchi (UCB and NSD), and engineers David Biare, Lucio di Paolo (NSD and LNGS), and Joseph Wallig (Engineering). Researcher Thomas Banks, postdoc Thomas O’Donnell, graduate student Jonathan Ouellet, all at physics department at UC Berkeley and NSD, NSD staff member Brian Fujikawa, and a former NSD postdoc Ke Han (now at Yale) made especially significant contributions to the analysis of CUORE-0 data and preparation of the results for the publication.
. 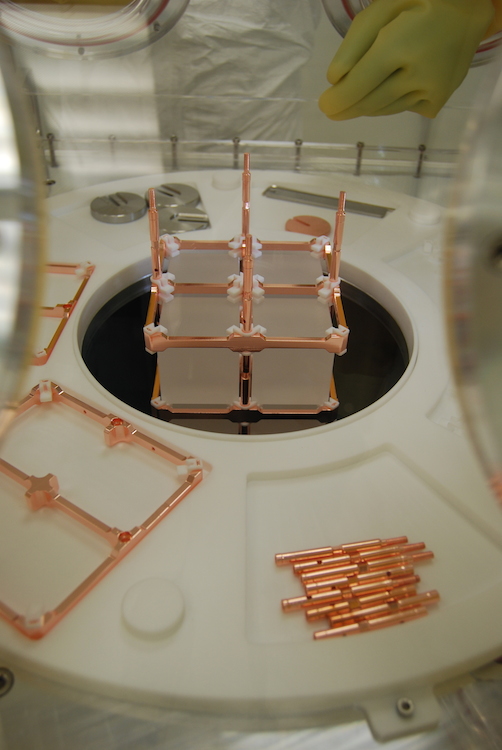