LA CAÑADA FLINTRIDGE >> A 12-minute total lunar eclipse will bedazzle early risers Saturday morning.
The total eclipse will begin at 4:54 a.m., but the entire shadow play starts at 3:16 a.m., said Jane Houston Jones of NASA’s Jet Propulsion Laboratory.
“The April 4 lunar eclipse covers the Pacific and can be seen from parts of Australia, New Zealand and eastern Asia to the western parts of North America,” Jones said in a video. “The total eclipse -- the brief phase when the entire surface of the moon is obscured -- will last about 12 minutes. For those on the West Coast, the eclipse will end at 6:45 in the morning.”
Saturday’s lunar eclipse will be the third of four lunar eclipses separated by about six months. This rare “tetrad” phenomenon, began on April 15, 2014, and will end with the final lunar eclipse of the series Sept. 28.
A lunar eclipse happens when a full moon hides from the sun behind Earth. The linear formation puts the moon in Earth’s shadow.
People west of the Mississippi River will be able to see the entire lunar eclipse. Those east of that will see an eclipse interrupted by sunrise.
Quelle: Pasadena Star-News
.
Update: 6.04.2015
. 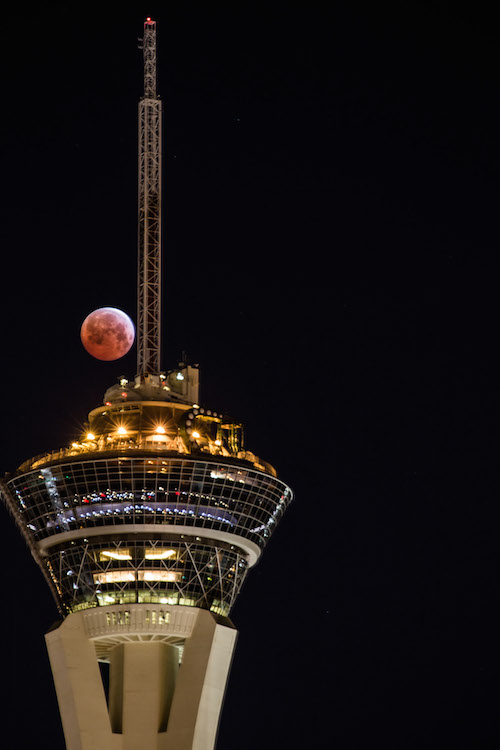 The total lunar eclipse of April 4, 2015 dominates this stunning photo by veteran astrophotographer Tyler Leavitt in Las Vegas, Nevada. Leavitt captured the eclipse with the Stratosphere hotel and casino.

The moon passed into the Earth's shadow before early today (April 4), turning most of the lunar surface a deep, blood-red color in a total lunar eclipse that lasted less than 10 minutes at its peak, making it the shortestof its kind this century.
Photos of the total lunar eclipse show a highly variable and unique color pattern on the lunar surface, which included shades of deep blood red, rusty orange, pale yellow, grayish blue and white. Collectively, the different colors created a stunning "rainbow" on the moon's surface, according to some observers.
This was the first total lunar eclipse of 2015 and the third in a series of four closely spaced total lunar eclipses — also known as a lunar tetrad. The fourth eclipse of the tetrad will occur on Sept. 28, 2015.
A spectacular lunar sight
Skywatchers in North and South America, Australia, Oceania, and Asia had a clear view of today's total lunar eclipse. Live views of the eclipse were streamed online by the Slooh community observatory. The Slooh webcast featured views from the Griffith Observatory in Los Angeles (which also hosted its own webcast), as well as feeds from Canada and Australia. NASA's Marshaell Space Flight Center also featured the Griffith Observatory feeds and included commentary from NASA lunar experts.
In the U.S. and Canada, the total lunar eclipse was briefly visible east of the Mississippi river, before the moon slipped below the horizon. (Here in Brooklyn, New York, the sky was too overcast to see the moon at all). Some regions along the east coast of North America saw only a partial lunar eclipse.
"I just saw a partial eclipse this morning," reader Laura Austin, of Sarnia, Ontario in Canada, told Space.com via email. "The moon ran out of sky and slipped behind the trees."
Further south, the view was no less spectacular, despite being only a partial view. Skywatcher A.M. Miller captured views of the partial eclipse as the moon appeared low on the horizon.
"As I'm located in Fort Lauderdale, Florida, I was only able to view a portion of the recent eclipse," Miller said. "It was amazing all the same, hope you enjoyed it as well."
.

Don't forget to look to the sky in the early morning hours of April 4 to catch a glimpse of the shortest total lunar eclipse of the century. Shown here, Sky & Telescope contributing photographer Akira Fujii caught nine images of the moon's progress through Earth's shadow in July 2000, using a star for alignment.
Credit: : Sky & Telescope/Akira Fuji
Quelle: SC