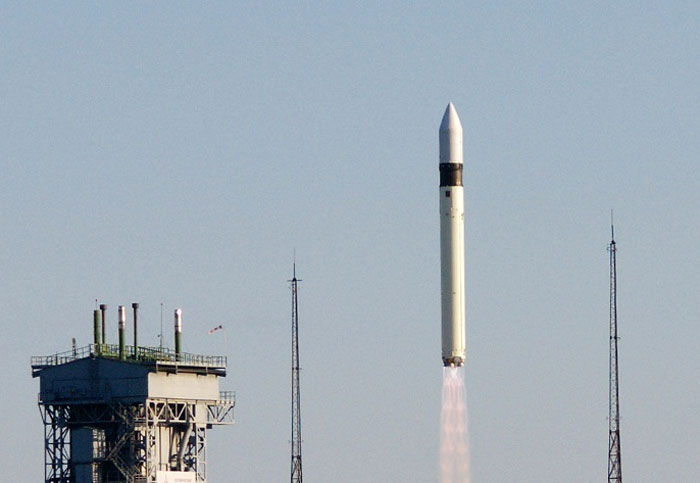 After a four-week delay, a converted ballistic missile launched a trio of communications satellites and a classified piggy-back cargo on Tuesday. The rocket carried three barrel-shaped Gonets-M satellites for the Gonets-D1M communications network, while the fourth payload might be a maneuverable experimental satellite. The launch was previously scheduled for March 3, however the liftoff was delayed by additional inspections of the engines on the second stage of the rocket. The Rockot booster (which means "rumble" in Russian) is made of a retired Soviet-era UR-100NU ballistic missile, plus an additional third stage known as Briz-KM, which serves as a space tug to deliver its payload from an initial parking orbit to a final operational orbit. The Rockot booster lifted off from Site 133 at Russia's military launch site near Plesetsk at 13:48 UTC on March 31 (16:48 Moscow Time). According to a spokesman for the Russian Air and Space Defense Forces, VKO, Aleksei Zolotukhin, quoted by an official RIA Novosti news agency, the payload section, including three Gonets-M and a military spacecraft separated from the second stage of the launch vehicle as planned at 16:53 Moscow Time.  It was the first official acknowledgement of an add-on cargo onboard routine missions made at the time of the launch, even though Western radar had previously detected two maneuverable spacecraft released during similar launches. One of such satellites, later identified as Kosmos-2499, conducted many months of mysterious maneuvers and in mid-March its radar signature "merged" with an inert Briz-KM space tug which had delivered it into orbit, probably indicating docking between two objects. The Russian Ministry of Defense made no comments on the mission, but at the end of last year a former head of the Russian space agency, Roscosmos, Oleg Ostapenko, claimed that the satellite had been developed by his agency in cooperation with the Russian Academy of Sciences. There has been no previous or subsequent record for such a project by any of these two organizations.  During a typical Gonets delivery mission, the Briz-KM stage with its payload separates from the second stage of the launch vehicle five minutes after the liftoff. Four seconds later, the space tug fires its own engine for about nine minutes in order to reach a 160 by 1,479-kilometer transfer orbit with an inclination 82.5 degrees toward the Equator. After the stack passively climbs to the highest point of this orbit around an hour later, Briz-KM fires its engine again for about a minute, forming a final circular orbit of the mission at an altitude of 1,500 kilometers above the Earth surface extending from South pole to North pole of the planet. 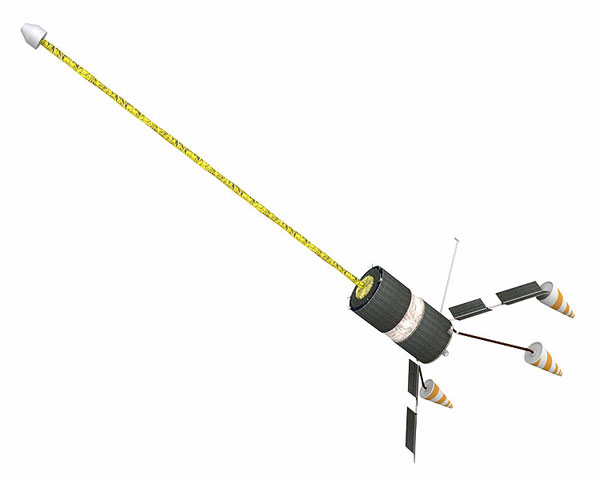 Gonets satellite.
Gonets (archaic Russian word for messenger) satellites are used for the so-called "store and dump" communications. The spacecraft of this type records communication messages, such as fax, telex or an email on its onboard recorder as it overflies the sender and later transmits it to an addressee, when it reaches the range of its receiving antennas. The method was intended primarily for communications in very remote areas without ground-based communications channels.
The Gonets satellites derived from their military precursors called Strela (Arrow), which served Soviet security and military intelligence services—the KGB and GRU. Soviet intelligence officials and staff at Soviet embassies overseas reportedly used the Strela satellite to transmit highly sensitive and urgent information, such as documents and images to Moscow.
The decision to develop a civilian version of the spacecraft was made at the end of the 1980s. The latest version of the network, identified as Gonets-D1M and consisting of Gonets-M1 satellites, was under development from at least 2006.
The Gonets-D1M constellation, was to provide 20 times more capacity for data transmission than its predecessor network.
Quelle: SEN
Raumfahrt
« Zum vorherigen Eintrag Zum nächsten Eintrag »
2580 Views
Created with page4