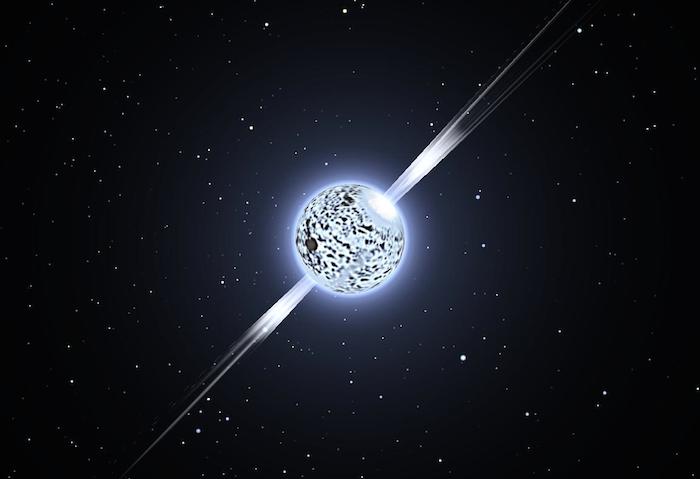 It has not yet been possible to measure the gravitational waves predicted by Einstein's theory of general relativity. They are so weak that they get lost in the noise of the measurements. But thanks to the latest simulations of the merging of binary neutron star systems, the structure of the sought-after signals is now known.
As a team of German and Japanese theoretical astrophysicists reports in the Editor's choice of the current edition of the scientific journal "Physical Review D", gravitational waves have a characteristic spectrum that is similar to the spectral lines of atoms.
Gravitational waves are generated when masses accelerate. The first indirect evidence for their existence was detected in 1974 when the binary pulsar PSR B1913+16 was discovered in the constellation Aquila. The two rapidly rotating neutron stars are drifting towards each other in a spiral shape, which is why, the astrophysicists explain, they are losing energy and emitting gravitational waves.
Russell A. Hulse and Joseph H. Taylor received the 1993 Nobel Prize in Physics for this discovery. In the meantime, there are now several large-scale experiments for detecting gravitational waves: the American LIGO experiment, the European Virgo experiment, and the Japanese KAGRA detector. Experts estimate that signals of gravitational waves from merging binary neutron star systems will be detected within the next five years.
"These signals are not easy to detect, because they have an extremely small amplitude." But despite these difficult conditions, it is possible to find them, if you know what to look for in advance," explained Professor Luciano Rezzolla from the Institute for Theoretical Physics at Goethe University.
Together with a Japanese colleague from Osaka University, he has studied a number of binary neutron star systems with the help of the latest simulation techniques and has discovered that the merging of the stars generates characteristic gravitational wave spectra.
"These spectra correspond, at least logically, to the electromagnetic spectral lines emitted by atoms or molecules. From these we can derive information on the characteristics of the stars," explains Rezzolla.
As the astrophysicists show in two publications with related content in "Physical Review Letters" (published in November 2014) and in the current edition of "Physical Review D," the gravitational waves spectrum is like a fingerprint for the two stars. If scientists learn how to interpret these spectra, they will know what the neutron stars are made of and will be able to determine what is their equation of state, which is so far unknown.
Equations of state describe the thermodynamic properties of systems as a function of variables, such as pressure, temperature, volume, or particle number. To this Rezzolla adds: "This is a very exciting possibility, because then we would be able to solve a riddle that has remained unsolved for 40 years: What are neutron stars made of and what is their stellar structure?"
"If the signal is strong and thus the fingerprint is very clear, even a single measurement would be sufficient," Rezzolla predicts.
"The prospects of solving the riddle of neutron stars have never been this good. The gravitational waves that we hope to detect in a few years are already on their way from the farthest reaches of the universe."
Quelle: SD
Astronomie
2499 Views
Created with page4