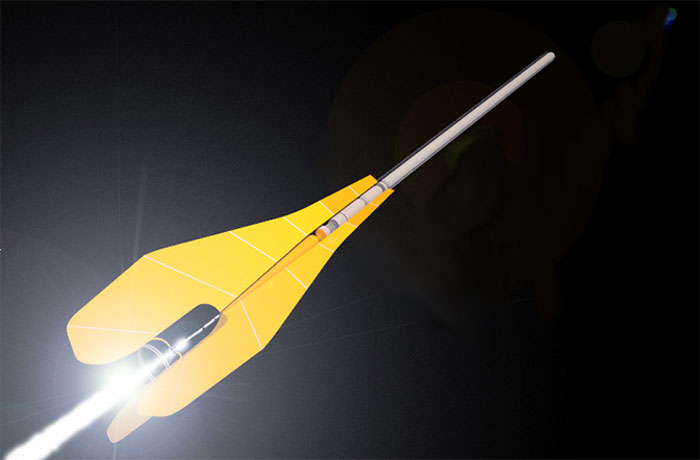 The Icarus Interstellar 'Firefly' starship concept could use novel nuclear fusion techniques to power its way to Alpha Centauri within 100 years.
.
As part of Icarus Interstellar's continuing series of guest articles on Discovery News, Michel Lamontagne, Project Icarus Core Designer, discusses a conceptual starship that could use novel fusion techniques to travel to the nearby star system Alpha Centauri.
The Icarus Interstellar Firefly
Robert Freeland wants to launch an interstellar probe -- not 100 years from now, but within his lifetime.
As Icarus Board Member and Deputy Project Leader, Freeland presented at the Tennessee Valley Interstellar Workshop (TVIW) in November, to propose a design for an starship that has all the things he likes: speed, elegance, and a short lead time.
"Firefly" (named so for its bright tail) is almost too pretty. It doesn't seem right, after decades of tin can projects by NASA, to envision elegance in a practical design.
But let the hard science fans be reassured: the entire morphology of the vessel follows directly from physical constraints. Even the pretty curve of the radiators was chosen to follow the actual heat load from the drive, while minimizing pumping distance and pipe/coolant mass. The design is backed by as much hard science as is available today.
Firefly's main drive is fueled by deuterium-deuterium (DD) fusion in a Z-pinch reactor. Z-pinch fusion was first explored in the late 1960s, but plasma instabilities relegated it to the dustbin. The idea languished for decades until recent research by Uri Shumlak at the University of Washington brought it back.
Shumlak's design resolves the plasma instabilities by introducing a strong shear flow of plasma through the pinch area. Simulations and laboratory experiments have shown that this strong shear flow "smooths out" the plasma instabilities that would otherwise occur, resulting in a stable pinch. Lab tests have thus far only been performed with non-fusing plasmas for safety reasons, but the theory and tests strongly indicate that a properly-designed Z-pinch could maintain a stable fusion core.
This is not fringe science -- Sandia National Laboratories is doing tests on Z-pinch fusion, and NASA's Huntsville-based "Charger One" facility is preparing to undertake its own lab tests this year.
Pure deuterium fusion was selected for Firefly because it is available in sea water at about 150 ppm as "heavy water", and is already commonly extracted in facilities all over the world for service in CANDU type fission reactors. If hydrogen becomes a common fuel source here on Earth, deuterium could readily be extracted even more cheaply as a byproduct of bulk hydrogen production plants.
This contrasts with more exotic fuel choices commonly proposed for fusion starships, particularly deuterium-helium3 (DHe3). The DHe3 reaction is fundamentally more desirable because its first-level reactions are all aneutronic; meaning that they produce only charged particles, with no damaging neutrons. The problem is that He3 is unavailable on Earth except in microscopic quantities, so it would have to be mined from the moon or the gas giant planets. This would require an extensive space program that then pushes an interstellar launch far into the future.
The unfortunate reality of DD fusion, though, is the tremendous flux of damaging high-energy neutron radiation. Even considering beneficial secondary reactions, neutrons account for almost half of the energy released by the reaction.
The Z-pinch drive compounds this problem with a very high flux of x-ray Bremsstrahlung radiation as well, produced as the super-heated electrons in the plasma bang into each other. Owing to its long, thin core, essentially all of the neutrons and x-ray radiation produced in the Z-pinch drive immediately escape the core.
. 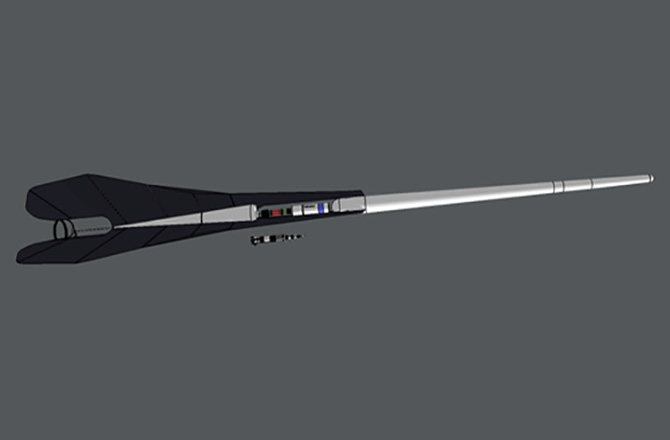 The scale of the 'Firefly' concept aside an Apollo era Saturn V rocket.
.
Freeland recognized early on that shielding all of this radiation would result in an unworkably massive vessel, so he took the opposite approach, designing Firefly to dump as much of the damaging radiation as possible directly into space. The vessel is long and pointy to minimize its radiation exposure, and most of the tail end of the ship is basically a giant radiator to handle the waste heat that can't otherwise be avoided.
The fuel tanks follow the principle of the Saturn 5 rocket, shown beside the ship for scale in the graphic above). Why add extra structure if the tanks themselves can be the structure? Michel Lamontagne's tank design does away with the structural spine common to most other designs and reduces structure to the barest minimum. Like Saturn 5, the forward part of the ship is mostly tank. The payload resides in the middle area, just before a large radiation shield that protects it from the drive's radiation.
Firefly is a big ship, although small by interstellar ship design standards. Like all the current Project Icarus designs, it would accelerate out into space, coast for a number of years, then decelerate at the Alpha Centauri system and release a swarm of sub-probes, all within a travel time of 100 years. This is faster than needed, really; increasing the travel time to several hundred years would reduce the technical challenges tremendously.
But from a practical standpoint, a 100-year mission lies at the very limit of organizational support. The Daedalus team, for instance, designed their 1978 probe for a 50-year flyby mission, because this was deemed the upper limit for a NASA engineer's professional career. Practicality in design extends not just to the technology, but to the social support necessary to make the mission possible.
There are still some important unresolved issues with the Firefly design:
The viability of Z-pinch fusion has yet to be confirmed, though Sandia National Labs and now NASA's Marshall Space Flight Center are undertaking lab tests.
The electrodes needed to supply power to the pinch must be constructed of advanced composite materials that have seen very little laboratory testing.
The direct energy conversion system needed to recapture energy from the exhaust stream to sustain the pinch is purely theoretical, with few published papers.
The high-temperature beryllium phase-change radiators that Michel Lamontagne designed for Firefly haven't yet been studied due to the expense and toxicity of beryllium. Similar systems using lithium have been used in fission reactors, but 2000K beryllium necessitates advanced piping materials (like zirconium carbide) to resist corrosion. Such systems need to be studied in a lab.
The system for communications between the vessel and Earth is rather vaguely specified at present.
Modeling the real behavior of a fusion drive exhaust in magnetic nozzles is another area where research lags considerably behind the needs of starship designers. Real world experiments -- necessarily in the large vacuum of space -- are needed to obtain data. The use of VASIMR on the ISS -- as a booster to keep the station at the proper orbit -- is a step in the right direction. (VASIMR will include the first magnetic nozzle "flown", or actually used in space.)
Design is an iterative process, and next year's Icarus Firefly may have changed considerably from this year's. Some of the prettiness may disappear if the numbers require it. But if Robert Freeland gets his way, two things are certain: it will be faster, and it will be easier to build.
Quelle: D-News
Raumfahrt
« Zum vorherigen Eintrag Zum nächsten Eintrag »
2528 Views
Created with page4