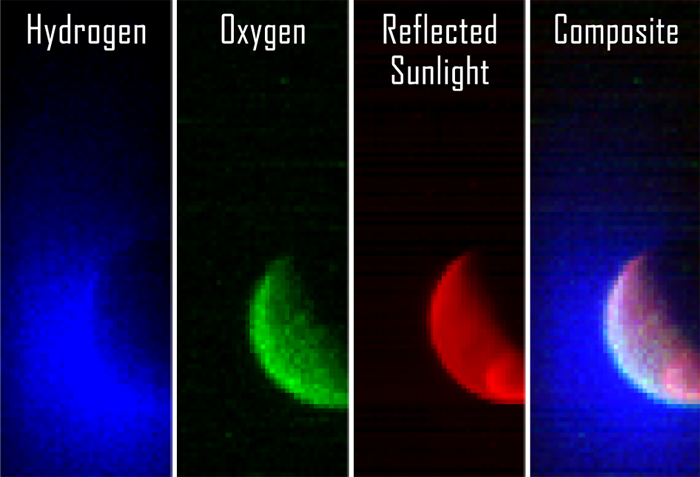 NASA’s Mars Atmosphere and Volatile Evolution (MAVEN) spacecraft has obtained its first observations of the extended upper atmosphere surrounding Mars.
The Imaging Ultraviolet Spectrograph (IUVS) instrument obtained these false-color images eight hours after the successful completion of Mars orbit insertion by the spacecraft at 10:24 p.m. EDT Sunday, Sept. 21, after a 10-month journey.
The image shows the planet from an altitude of 36,500 km in three ultraviolet wavelength bands.  Blue shows the ultraviolet light from the sun scattered from atomic hydrogen gas in an extended cloud that goes to thousands of kilometers above the planet’s surface.  Green shows a different wavelength of ultraviolet light that is primarily sunlight reflected off of atomic oxygen, showing the smaller oxygen cloud. Red shows ultraviolet sunlight reflected from the planet’s surface; the bright spot in the lower right is light reflected either from polar ice or clouds.
The oxygen gas is held close to the planet by Mars’ gravity, while lighter hydrogen gas is present to higher altitudes and extends past the edges of the image. These gases derive from the breakdown of water and carbon dioxide in Mars’ atmosphere. Over the course of its one-Earth-year primary science mission, MAVEN observations like these will be used to determine the loss rate of hydrogen and oxygen from the Martian atmosphere.  These observations will allow us to determine the amount of water that has escaped from the planet over time.
MAVEN is the first spacecraft dedicated to exploring the tenuous upper atmosphere of Mars.
Quelle: NASA
.
Update: 14.10.2014
.
NASA Mission Provides Its First Look at Martian Upper Atmosphere

Three views of an escaping atmosphere, obtained by MAVEN’s Imaging Ultraviolet Spectrograph. By observing all of the products of water and carbon dioxide breakdown, MAVEN's remote sensing team can characterize the processes that drive atmospheric loss on Mars.
Image Credit: University of Colorado/NASA
.
NASA's Mars Atmosphere and Volatile Evolution (MAVEN) spacecraft has provided scientists their first look at a storm of energetic solar particles at Mars, produced unprecedented ultraviolet images of the tenuous oxygen, hydrogen, and carbon coronas surrounding the Red Planet, and yielded a comprehensive map of highly-variable ozone in the atmosphere underlying the coronas.
The spacecraft, which entered Mars' orbit Sept. 21, now is lowering its orbit and testing its instruments. MAVEN was launched to Mars in November 2013, to help solve the mystery of how the Red Planet lost most of its atmosphere.
"All the instruments are showing data quality that is better than anticipated at this early stage of the mission," said Bruce Jakosky, MAVEN Principal Investigator at the University of Colorado, Boulder. "All instruments have now been turned on -- although not yet fully checked out -- and are functioning nominally. It's turning out to be an easy and straightforward spacecraft to fly, at least so far. It really looks as if we're headed for an exciting science mission."
Solar energetic particles (SEPs) are streams of high-speed particles blasted from the sun during explosive solar activity like flares or coronal mass ejections (CMEs). Around Earth, SEP storms can damage the sensitive electronics on satellites. At Mars, they are thought to be one possible mechanism for driving atmospheric loss.
A solar flare on Sept. 26 produced a CME that was observed by NASA satellites on both sides of the sun. Computer models of the CME propagation predicted the disturbance and the accompanying SEPs would reach Mars on Sept. 29. MAVEN's Solar Energetic Particle instrument was able to observe the onset of the event that day.
"After traveling through interplanetary space, these energetic particles of mostly protons deposit their energy in the upper atmosphere of Mars," said SEP instrument lead Davin Larson of the Space Sciences Laboratory at the University of California, Berkeley. "A SEP event like this typically occurs every couple weeks. Once all the instruments are turned on, we expect to also be able to track the response of the upper atmosphere to them."
The hydrogen and oxygen coronas of Mars are the tenuous outer fringe of the planet's upper atmosphere, where the edge of the atmosphere meets space. In this region, atoms that were once a part of carbon dioxide or water molecules near the surface can escape to space. These molecules control the climate, so following them allows us to understand the history of Mars over the last four billion years and to track the change from a warm and wet climate to the cold, dry climate we see today. MAVEN observed the edges of the Martian atmosphere using the Imaging Ultraviolet Spectrograph (IUVS), which is sensitive to the sunlight reflected by these atoms.
"With these observations, MAVEN's IUVS has obtained the most complete picture of the extended Martian upper atmosphere ever made," said MAVEN Remote Sensing Team member Mike Chaffin of the University of Colorado, Boulder. "By measuring the extended upper atmosphere of the planet, MAVEN directly probes how these atoms escape to space. The observations support our current understanding that the upper atmosphere of Mars, when compared to Venus and Earth, is only tenuously bound by the Red Planet's weak gravity."
IUVS also created a map of the atmospheric ozone on Mars by detecting the absorption of ultraviolet sunlight by the molecule.
"With these maps we have the kind of complete and simultaneous coverage of Mars that is usually only possible for Earth," said MAVEN Remote Sensing Team member Justin Deighan of the University of Colorado, Boulder. "On Earth, ozone destruction by refrigerator CFCs is the cause of the polar ozone hole. On Mars, ozone is just as easily destroyed by the byproducts of water vapor breakdown by ultraviolet sunlight. Tracking the ozone lets us track the photochemical processes taking place in the Martian atmosphere. We'll be exploring this in more complete detail during MAVEN's primary science mission."
There will be about two weeks of additional instrument calibration and testing before MAVEN starts its primary science mission. This includes an end-to-end test to transmit data between NASA's Curiosity rover on the surface of Mars and Earth using the MAVEN mission's Electra telecommunications relay. The mission aims to start full science gathering in early to mid-November.
MAVEN's principal investigator is based at the University of Colorado's Laboratory for Atmospheric and Space Physics. The university provided two science instruments and leads science operations, as well as education and public outreach, for the mission. The University of California at Berkeley's Space Sciences Laboratory also provided four science instruments for the mission. NASA's Goddard Space Flight Center in Greenbelt, Maryland manages the MAVEN project and provided two science instruments for the mission. Lockheed Martin built the spacecraft and is responsible for mission operations. NASA's Jet Propulsion Laboratory in Pasadena, California provides navigation and Deep Space Network support, as well as the Electra telecommunications relay hardware and operations.
Quelle: NASA
.
Update: 16.12.2014
. 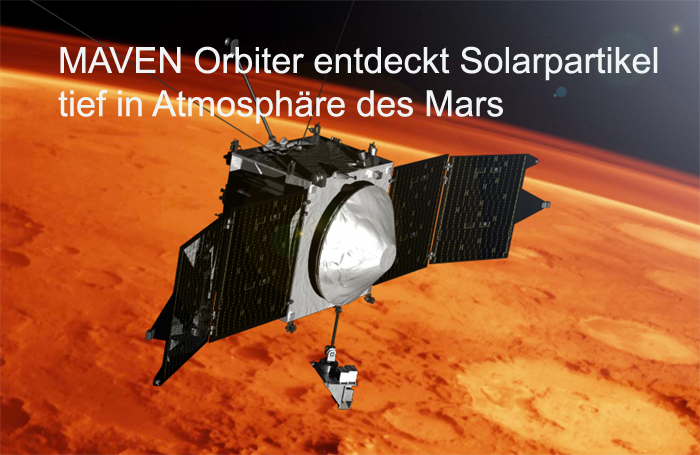