Valentine's Day is special for NASA's Voyager mission. It was on Feb. 14, 1990, that the Voyager 1 spacecraft looked back at our solar system and snapped the first-ever pictures of the planets from its perch at that time beyond Neptune.
This "family portrait" captures Neptune, Uranus, Saturn, Jupiter, Earth and Venus from Voyager 1's unique vantage point. A few key members did not make it in: Mars had little sunlight, Mercury was too close to the sun, and dwarf planet Pluto turned out too dim.
Taking these images was not part of the original plan, but the late Carl Sagan, a member of the Voyager imaging team at the time, had the idea of pointing the spacecraft back toward its home for a last look. The title of his 1994 book, "Pale Blue Dot," refers to the image of Earth in this series.
"Twenty-five years ago, Voyager 1 looked back toward Earth and saw a 'pale blue dot,' " an image that continues to inspire wonderment about the spot we call home," said Ed Stone, project scientist for the Voyager mission, based at the California Institute of Technology, Pasadena.
The image of Earth contains scattered light that resembles a beam of sunlight, which is an artifact of the camera itself that makes the tiny Earth appear even more dramatic. Voyager 1 was 40 astronomical units from the sun at this moment. One astronomical unit is 93 million miles, or 150 million kilometers.
These family portrait images are the last that Voyager 1, which launched in 1977, returned to Earth. Mission specialists subsequently turned the camera off so that the computer controlling it could be repurposed. The spacecraft is still operating, but no longer has the capability to take images.
"After taking these images in 1990, we began our interstellar mission. We had no idea how long the spacecraft would last," Stone said.
Today, Voyager 1, at a distance of 130 astronomical units, is the farthest human-made object from Earth, and it still regularly communicates with our planet. In August 2012, the spacecraft entered interstellar space – the space between the stars -- and has been delivering data about this uncharted territory ever since. Its twin, Voyager 2, also launched in 1977, is also journeying toward interstellar space.
Voyager 1 is more than three times farther from Earth than it was on Valentine's Day 25 years ago. Today, Earth would appear about 10 times dimmer from Voyager's vantage point.
Sagan wrote in his "Pale Blue Dot" book: "That's here. That's home. That's us. On it everyone you love, everyone you know, everyone you ever heard of, every human being who ever was, lived out their lives. … There is perhaps no better demonstration of the folly of human conceits than this distant image of our tiny world."
NASA's Jet Propulsion Laboratory, Pasadena, California, built and operates the twin Voyager spacecraft. The Voyagers Interstellar Mission is a part of NASA's Heliophysics System Observatory, sponsored by the Heliophysics Division of NASA's Science Mission Directorate in Washington.
. 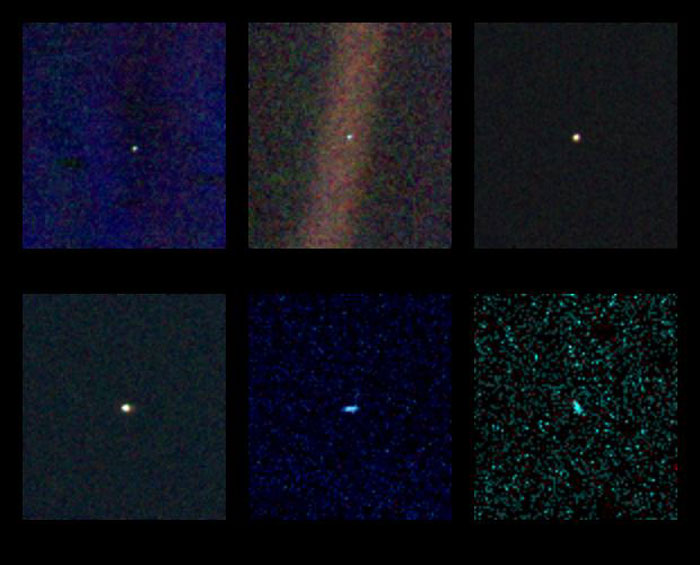 Original Caption Released with Image:
These six narrow-angle color images were made from the first ever 'portrait' of the solar system taken by Voyager 1, which was more than 4 billion miles from Earth and about 32 degrees above the ecliptic. The spacecraft acquired a total of 60 frames for a mosaic of the solar system which shows six of the planets. Mercury is too close to the sun to be seen. Mars was not detectable by the Voyager cameras due to scattered sunlight in the optics, and Pluto was not included in the mosaic because of its small size and distance from the sun. These blown-up images, left to right and top to bottom are Venus, Earth, Jupiter, and Saturn, Uranus, Neptune. The background features in the images are artifacts resulting from the magnification. The images were taken through three color filters -- violet, blue and green -- and recombined to produce the color images. Jupiter and Saturn were resolved by the camera but Uranus and Neptune appear larger than they really are because of image smear due to spacecraft motion during the long (15 second) exposure times. Earth appears to be in a band of light because it coincidentally lies right in the center of the scattered light rays resulting from taking the image so close to the sun. Earth was a crescent only 0.12 pixels in size. Venus was 0.11 pixel in diameter. The planetary images were taken with the narrow-angle camera (1500 mm focal length).
.

Original Caption Released with Image:
The cameras of Voyager 1 on Feb. 14, 1990, pointed back toward the sun and took a series of pictures of the sun and the planets, making the first ever "portrait" of our solar system as seen from the outside. In the course of taking this mosaic consisting of a total of 60 frames, Voyager 1 made several images of the inner solar system from a distance of approximately 4 billion miles and about 32 degrees above the ecliptic plane. Thirty-nine wide angle frames link together six of the planets of our solar system in this mosaic. Outermost Neptune is 30 times further from the sun than Earth. Our sun is seen as the bright object in the center of the circle of frames. The wide-angle image of the sun was taken with the camera's darkest filter (a methane absorption band) and the shortest possible exposure (5 thousandths of a second) to avoid saturating the camera's vidicon tube with scattered sunlight. The sun is not large as seen from Voyager, only about one-fortieth of the diameter as seen from Earth, but is still almost 8 million times brighter than the brightest star in Earth's sky, Sirius. The result of this great brightness is an image with multiple reflections from the optics in the camera. Wide-angle images surrounding the sun also show many artifacts attributable to scattered light in the optics. These were taken through the clear filter with one second exposures. The insets show the planets magnified many times. Narrow-angle images of Earth, Venus, Jupiter, Saturn, Uranus and Neptune were acquired as the spacecraft built the wide-angle mosaic. Jupiter is larger than a narrow-angle pixel and is clearly resolved, as is Saturn with its rings. Uranus and Neptune appear larger than they really are because of image smear due to spacecraft motion during the long (15 second) exposures. From Voyager's great distance Earth and Venus are mere points of light, less than the size of a picture element even in the narrow-angle camera. Earth was a crescent only 0.12 pixel in size. Coincidentally, Earth lies right in the center of one of the scattered light rays resulting from taking the image so close to the sun.
. 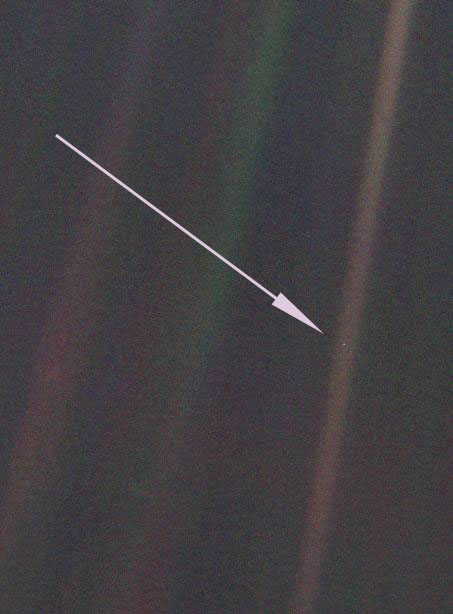 Original Caption Released with Image:
This narrow-angle color image of the Earth, dubbed 'Pale Blue Dot', is a part of the first ever 'portrait' of the solar system taken by Voyager 1. The spacecraft acquired a total of 60 frames for a mosaic of the solar system from a distance of more than 4 billion miles from Earth and about 32 degrees above the ecliptic. From Voyager's great distance Earth is a mere point of light, less than the size of a picture element even in the narrow-angle camera. Earth was a crescent only 0.12 pixel in size. Coincidentally, Earth lies right in the center of one of the scattered light rays resulting from taking the image so close to the sun. This blown-up image of the Earth was taken through three color filters -- violet, blue and green -- and recombined to produce the color image. The background features in the image are artifacts resulting from the magnification.
Quelle: NASA
Raumfahrt
2380 Views
Created with page4