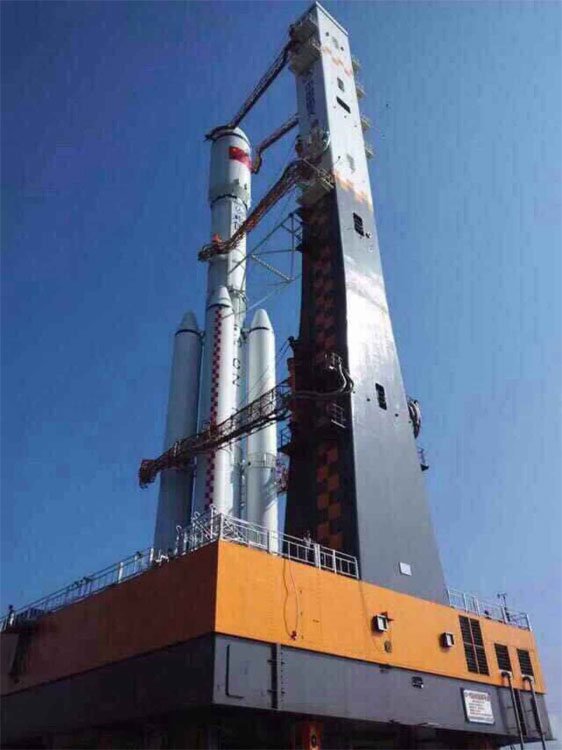 LM-7 Assembly
The LM-7 prototype is assembled at the Wenchang Satellite Launch Center (China's equivalent to Cape Canaveral) for non-flight testing. Fitting all the rocket segments and boosters allows for vibration testing and validating models on fuel flows and stress loads.
On the tropical island Hainan, Wenchang Satellite Launch Center got its very first heavy rocket. The Long March 7 (LM-7), built by the China Aerospace Science and Technology Corporation (CASTC), will likely not launch until 2016, but Chinese engineers have assembled it on the launch pad's mobile service structure in order to test its systems for preflight and integration quality assurance.
. 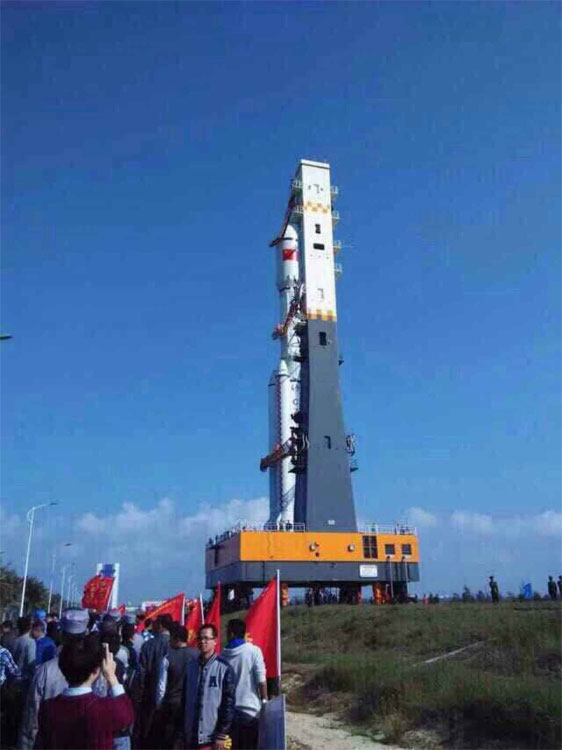 LM-7
The testing LM-7 space launch rocket its attached to the erector pad at Wenchang, China. The erector pad is attached to the rocket to keep it upright as it transits from the preparation facility out into the launch pad.
The LM-7 is a mid-heavy weight, 600 ton launch rocket, similar to the SpaceX Falcon 9 rocket. It is likely to replace the man-rated Long March 2 rocket, which is currently used to launch China's manned Shenzhou space missions. However, the LM-7 is estimated to carry 13.5 tons (depending on booster rocket configuration) of cargo in low earth orbit, which is a 50% increase over the LM-2. Its 3.35 meter core diameter would allow it to carry most commercial payloads, as well as larger scientific payloads into sun synchronous orbits to observe space weather activity like solar flares.
. 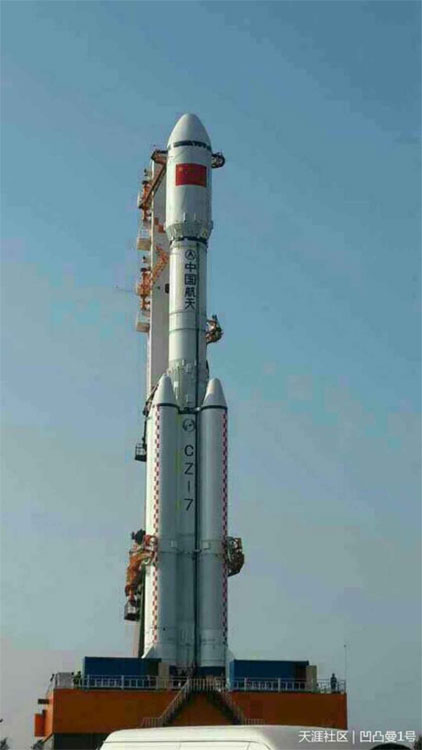 Complete LM-7
The LM-7 rocket can be attached with four solid fuel rocket boosters, in order to carry its maximum 13.5 ton payload into low earth orbit.
The LM-7, along with the lighter Long March 6 and heavier Long March 5, will act as China's next generation of space launch vehicles. Chinese advances in space launch technology will see not only an increased military presence in orbit, but also scientific cooperation and even lunar exploration.
Quelle:PS
-
Update: 7.02.2015
.

Beijing has shipped its liquid-fuelled carrier rocket, the Long March 7, to its Wenchang Satellite Launch Center in Hainan province for tests in preparation for the rocket's first launch next year, reports China's Global Times.
The rocket is fueled by a non-toxic and non-polluting liquid diesel and its modular design allows for modification of the engine and propeller to accommodate various spacecraft.
The country has also scheduled a test launch of the Long March 5 this year, touted to have the same payload as the US launch systems Delta IV, Atlas V and Falcon 9.
Beijing considers its billion-dollar space program as a sign of its rising international status and technological improvement as well as evidence that its ruling party has successfully turned the country's fate around, reported the Japan Times. The People's Liberation Army has plans to establish a permanent space station in 2020 and eventually launch a manned mission to the moon.
China has already been evaluating the possibilities and requirements for the Long March 7's next generation, new multi-stage rocket named Long March 9. The rocket aims to have a payload equivalent to the US launch vehicle Jupiter, with a maximum payload of 130 tons, according to Liang Xiaohong, vice director of the China Academy of Launch Vehicle Technology. The rocket's first test launch has been planned for 2028.
The Long March 9 suggests China has a long-term, methodical strategy toward space programs and Chinese space program planners believe that they will continue to receive funds and political support from President Xi Jinping, said Asia Pacific Defense Forum, a magazine sponsored by the US Pacific Command.
Ralph Winnie, who leads Eurasian Business Coalition's China program, said during the forum that China's space programs have won the support of the country's public and leaders and have a dramatic impact on public opinion, boosting Chinese society's confidence and instilling a belief that China and its people can overcome any challenge or difficulty.
Quelle: China Times