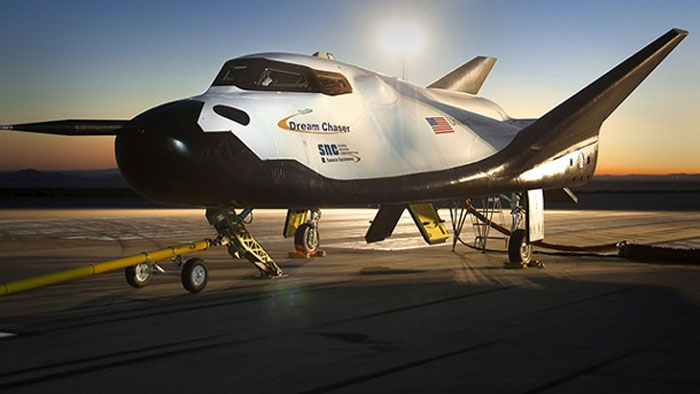 SPARKS, Nev. (Feb. 3, 2015) – Sierra Nevada Corporation’s (SNC) Space Systems and OHB System AG (OHB) announce the completion of the initial Dream Chaser® for European Utilization (DC4EU) study co-funded by the Space Administration of the German Aerospace Center (DLR) and OHB. OHB and DLR are both based in Germany.
As announced by the companies in late 2013, SNC and OHB entered into an agreement to study the feasibility of using SNC’s Dream Chaser spacecraft for a variety of missions. The DC4EU study thoroughly reviewed applications for the Dream Chaser including crewed and uncrewed flights to low-Earth orbit (LEO) for missions such as microgravity science, satellite servicing and active debris removal (ADR).
“The inherent design advantages of the Dream Chaser reusable lifting body spacecraft make it an ideal vehicle for a broad range of space applications,” said Dr. Fritz Merkle, member of the Executive Management Board of OHB AG. “We partnered with SNC to study how the design of the Dream Chaser can be used to advance European interests in space. The study results confirm the viability of using the spacecraft for microgravity science and ADR. DC4EU can benefit the entire international space community with its unique capabilities. We look forward to further maturing our design with SNC as we expand our partnership.”
In addition to the study, OHB supported SNC as an exhibitor at the American Society for Gravitational Space Research Conference in late October. During the conference, SNC presented the Dream Chaser spacecraft microgravity research capability for the first time including the debut of a full scale mock-up of the Dream Chaser for Science mission variant.
The DC4EU study is SNC’s first contracted international effort to explore the broad capabilities of the Dream Chaser vehicle.
“We highly value our partnership with the German Aerospace Center and industry teammates, we see this study as the first step towards achieving broad scientific and servicing applications for international missions,” said Dr. John Olson, vice president of Space Exploration Systems for SNC’s Space Systems. “SNC is currently working with OHB on the next phase of our ongoing DC4EU collaboration together with DLR and will be announcing further details in the near future.
SNC’s Dream Chaser is a multi-mission-capable space utility vehicle that is able to flexibly operate as an independent science platform, logistics enabler, or orbital servicing vehicle with the ability to deploy, retrieve, repair, replace, refuel, or assemble items in space. Dream Chaser provides the only reusable, human-rated, lifting-body spacecraft with a commercial runway landing capability, anywhere in the world - offering safe, affordable, flexible and reliable transportation to space.
About OHB System AG
The systems specialist OHB System AG is one of the leading independent forces in European space. We have been making a name for ourselves on the market with our creative and business approach for a good 33 years particularly in our core business comprising low-orbiting and geostationary satellites. We are developing and executing some of the key projects of our times such as the Galileo FOC navigation satellites, In manned space flight, we are working intensively on humanity's most remote outpost, the International Space Station ISS. We were materially involved in assembling and equipping the Columbus research laboratory fitted to the ISS and the ATV space freighter as well as numerous experiment systems used on board the ISS.
About Sierra Nevada Corporation’s Space Systems
Sierra Nevada Corporation’s Space Systems business area based in Louisville, Colorado, designs and manufactures advanced spacecraft, space vehicles, rocket motors and spacecraft subsystems and components for the U.S. Government, commercial customers, as well as for the international market.  SNC’s Space Systems has more than 25 years of space heritage and has participated in over 400 successful space missions through the delivery of over 4,000 systems, subsystems and components.  During its history, SNC’s Space Systems has concluded over 70 programs for NASA and over 50 other clients. For more information about SNC’s Space Systems visit www.sncspace.com and follow us at Facebook.com/SNCSpaceSystems and Twitter @SNCspacesystems.
About Sierra Nevada Corporation
Sierra Nevada Corporation (SNC), headquartered in Sparks, Nevada, is among the “World’s Top 10 Most Innovative Companies in Space.” Over the last 30 years, under the leadership of President Eren Ozmen and CEO Fatih Ozmen, SNC has become one of America’s fastest-growing private companies and the Top Woman-Owned Federal Contractor in the United States. With a workforce of over 3,000 personnel in 31 locations in 17 states, SNC has a reputation for rapid, innovative, and agile technology solutions in electronics, aerospace, avionics, space, propulsion, micro-satellite, aircraft, communications systems and solar energy.
SNC has six unique business areas that are dedicated to providing leading-edge solutions to its dynamic customer base. SNC has a proven track record of success spanning more than five decades. It is focused on providing its customers with the very best in diversified technologies and continues to focus its growth on the commercial sector through internal advancements in dual-use applications and outside acquisitions including the emerging markets of renewable energy, telemedicine, nanotechnology, cyber and net-centric operations.
Quelle: Sierra Nevada Corporation (SNC)