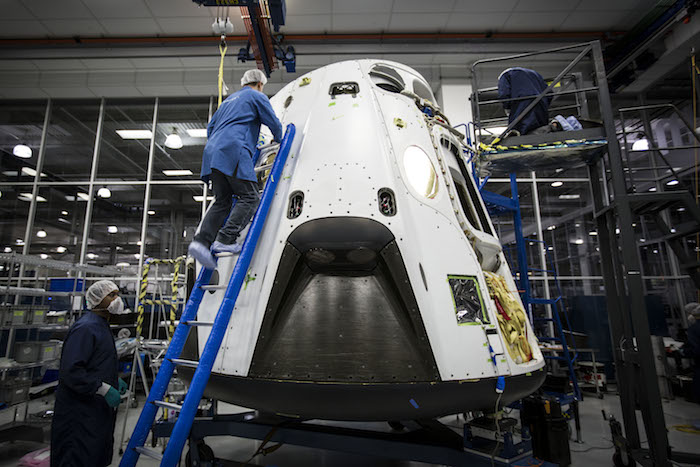 SpaceX has released this photo of the Dragon spacecraft for the pad abort test. Credit: SpaceX
-
SpaceX is finishing up preparations for a major test of a rocket-powered abort system for the company’s new Dragon crew ferry spacecraft, targeting launch from Cape Canaveral in March after a pair of Falcon 9 missions in February.
The redesigned version of SpaceX’s cargo-carrying Dragon capsule should be ready for an uncrewed space mission by late 2016, said Gwynne Shotwell, the company’s president and chief operating officer. A piloted test flight will follow in early 2017, she said.
Engineers have already built a prototype version of the human-rated capsule for the abort test from Cape Canaveral’s Complex 40 launch pad. The craft will not carry a space-rated life support system or cockpit displays, but SpaceX officials have said an instrumented mannequin will be strapped into a seat inside the capsule’s crew cabin.
The pad abort test was delayed from last year, but Shotwell told reporters Jan. 26 that SpaceX has “largely completed” construction of the pad abort system.
“It took us quite a while to get there, but there’s a lot of great technology and innovations in that pad abort vehicle,” Shotwell said.
The pad abort setup includes a capsule with hundreds of sensors to measure pressures, loads, temperatures and other data during the flight test, which is expected to last about one minute. The craft will blast off from a specially-built truss to mimic the capsule sitting atop a Falcon 9 booster.
The test will be the most visible sign of progress on NASA’s commercial crew program at Cape Canaveral since the space shuttle’s retirement in 2011. The space agency is turning over crew taxi flights to the International Space Station to industry, allowing NASA to spend more money on human missions to deep space.
The pad abort is scheduled after two upcoming Falcon 9 launches from Complex 40. The Deep Space Climate Observatory for NOAA is set to blast off Feb. 8, followed by the launch of a pair of communications satellites for Eutelsat and Asia Broadcast Satellite before the end of the month.
Eight SuperDraco rocket engines will fire to push the spacecraft away from the truss platform and demonstrate the Dragon’s ability to escape from a catastrophic mishap on the launch pad.
SpaceX shared the brief video clip below showing a SuperDraco “jetpack” with two thrusters firing on a stand at the company’s test facility in McGregor, Texas.
The test capsule’s SuperDraco engines will propel the craft several thousand feet into the air before three main parachutes unfurl and the Dragon gently splashes down in the Atlantic Ocean just offshore Cape Canaveral.
Each SuperDraco thruster generates about 16,000 pounds of thrust to carry crews away from danger during launch. SpaceX says the engines can also slow down the capsule during landing, eventually allowing the craft to accomplish propulsive pinpoint touchdowns like a helicopter.
“The integrated launch abort system is critically important to us,” Shotwell said. “We think it gives incredible safety features for a full abort all the way through ascent. It does also allow us the ultimate goal of fully propulsive landing.”
The Crew Dragon’s initial flights will end with splashdowns in the ocean like the capsule’s cargo version.
SpaceX won a NASA contract worth up to $2.6 billion in September to finish development of the Crew Dragon spacecraft to ferry astronauts to and from the International Space Station. Boeing netted a similar deal for its CST-100 space capsule with a maximum value of $4.2 billion.
NASA is counting on the two companies being certified to fly crews by the end of 2017, allowing the space agency to end its reliance on Russian Soyuz spacecraft to send astronauts to the space station.
The human-rated version of the Dragon spacecraft features many upgrades from the capsule’s cargo configuration, which has flown to the space station six times. It adds extra levels of redundancy, a new life support system, cockpit displays, a modernized heat shield, and has a different shape than the logistics capsule.
“We understand and have been told that crew is clearly different (than cargo),” Shotwell said. “There are a number of upgrades that we’ve been working for the past few years to ensure that this crewed version of Dragon is as reliable as possible, and ultimately we plan for it to be the most reliable spaceship flying crew ever.”
. 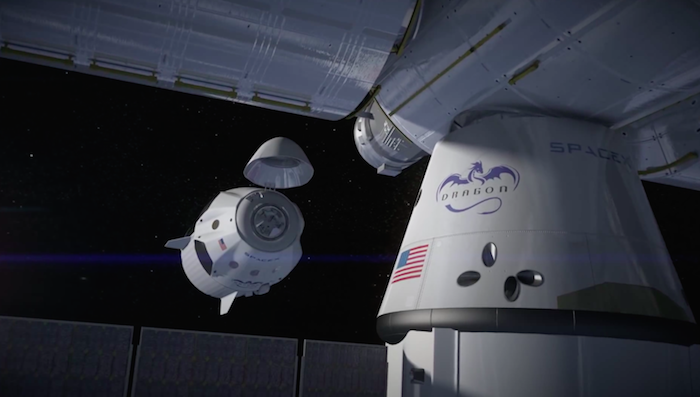 Artist’s concept of a Crew Dragon spacecraft on final approach to the International Space Station. A SpaceX cargo craft is also seen in this animation. Credit: SpaceX
-
SpaceX plans another abort test later this year to demonstrate the capsule can fly away from an exploding rocket in flight. The maneuver will occur about 73 seconds after liftoff, according to NASA, when aerodynamic pressures on the rocket are highest.
Once the pad abort capsule is returned to Port Canaveral — and if it survives the high-stress abort unscathed — SpaceX engineers could reuse the craft for the in-flight abort later in the year.
“We’ve got a few environmental hurdles to get through before we fly that,” Shotwell said.
The pad and in-flight abort tests are leftover milestones under an earlier agreement between SpaceX and NASA finalized in 2012. The space agency extended the deadline for the abort tests from last year until the end of March 2015, while SpaceX has already started work under its new $2.6 billion contract signed in September.
Another company that competed for NASA’s commercial crew contracts — Sierra Nevada Corp. — also received an extension from NASA to conduct an approach and landing test of the Dream Chaser space plane.
Sierra Nevada did not win funding from NASA to continue work on the Dream Chaser beyond the existing agreement expiring this year.
Quelle: SN
Raumfahrt
« Zum vorherigen Eintrag Zum nächsten Eintrag »
3097 Views
Created with page4