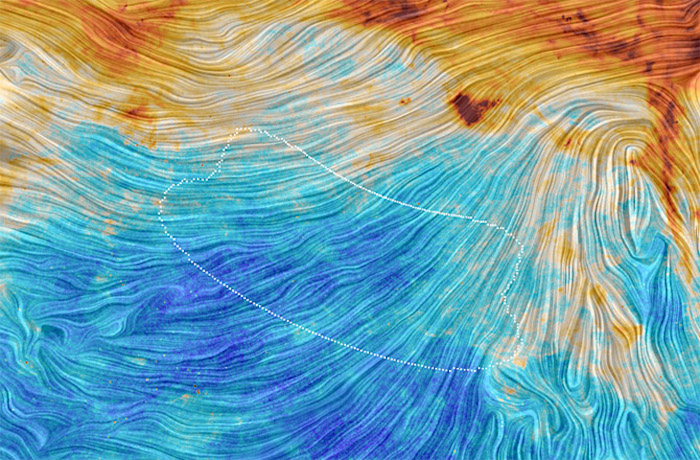 This new image shows a patch of the southern sky and is based on observations performed by ESA's Planck satellite at microwave and sub-millimeter wavelengths. The color scale represents the emission from dust, a minor but crucial component of the interstellar medium that pervades our Milky Way galaxy. The texture, instead, indicates the orientation of the Galactic magnetic field. It is based on measurements of the direction of the polarized light emitted by the dust. The BICEP2 field of view is outlined in white. ESA/PLANCK COLLABORATION. ACKNOWLEDGMENT: M.-A. MIVILLE-DESCHÊNES, CNRS – INSTITUT D’ASTROPHYSIQUE SPATIALE, UNIVERSITÉ PARIS-XI, ORSAY, FRANCE
-
In online French documents briefly released and then removed last night and confirmed by the European Space Agency today, physicists have announced that last year’s much-publicized ‘discovery’ of gravitational waves embedded in the ‘echo’ of the Big Bang was a misstep.
Preempting the official research paper that is planned to be published next week, the ESA, who manages the Planck space telescope data, has gone on the record to say that the BICEP2 measurements of B-mode polarization in the cosmic microwave background (CMB) was caused not by the presence of primordial gravitational waves, but by obscuring dust inside our own galaxy. The CMB is the left-over ancient radiation from the Big Bang that occurred nearly 14 billion years ago.
“Despite earlier reports of a possible detection, a joint analysis of data from ESA’s Planck satellite and the ground-based BICEP2 and Keck Array experiments has found no conclusive evidence of primordial gravitational waves,” writes an ESA statement.
This null result doesn’t come as a surprise to many scientists in the field, however.
Since the media storm that surrounded one of the would-be biggest cosmological discoveries in modern history in March 2014, the BICEP2 data has been heavily scrutinized. Although the BICEP2 telescope, a US-led project based near the South Pole, is designed to detect the tell-tail ‘wiggle’ in the polarization of CMB radiation caused by the presence of gravitational waves, great care needs to be taken when interpreting the results.
Should gravitational waves be detected, not only would their discovery be monumental, it would also confirm some key models of the universe’s origin, thereby revealing the mechanisms behind inflation — the split-second expansion of the universe immediately after the Big Bang.
However, between us and the outermost reaches of our observable universe there is magnetized material within our own galaxy. Any radiation detected beyond our galaxy has to travel through the interstellar dust and the signal needs to be corrected for. But to correct for our galaxy’s dust, you need to precisely map it first — this is where the European Planck space telescope comes in.
Before it went silent in 2013, Planck was surveying the sky, mapping the CMB. But it was also mapping the intervening magnetic field and dust content of our galaxy. These data are critical to subtract from CMB measurements if B-mode polarization is to be detected. But in March 2014, when the BICEP2 researchers announced their results to the world, the precision Planck dust map was not available.
Now that the Planck survey data has been processed, it seems that the BICEP2 ‘signal’ of gravitational waves is in fact interference caused by galactic dust.
“When we first detected this signal in our data, we relied on models for Galactic dust emission that were available at the time,” said John Kovac, principal investigator of BICEP2 at Harvard University, Cambridge, Mass. “These seemed to indicate that the region of the sky chosen for our observations had dust polarization much lower than the detected signal.”
Now the BICEP2 and Planck teams are working together in hopes to place some limits on how strong any potential gravitational wave signals will be.
“This joint work has shown that the detection of primordial B-modes is no longer robust once the emission from Galactic dust is removed,” added Jean-Loup Puget, principal investigator of the HFI instrument on Planck at the Institut d’Astrophysique Spatiale in Orsay, France.
“So, unfortunately, we have not been able to confirm that the signal is an imprint of cosmic inflation.”
We will have to wait to read the full details behind this latest twist in the BICEP2 results when the joint Planck-BICEP2 paper is published next week, but it seems certain that the original BICEP2 announcement was premature.
It is important to note, however, that this null result doesn’t disprove the existence of gravitational waves, it just confirms, to a high degree of certainty, that BICEP2 hasn’t detected gravitational waves — yet.
“While we haven’t found strong evidence of a signal from primordial gravitational waves in the best observations of CMB polarization that are currently available, this by no means rules out inflation,” said Reno Mandolesi, principal investigator of the LFI instrument on Planck at University of Ferrara, Italy.
There’s also the possibility that the gravitational wave signal is in the BICEP2 data, but it is just swamped in the noise, so this new result places an upper limit on the possible strength of B-mode polarization caused by gravitational waves.
“The gravitational wave signal could still be there, and the search is definitely on,” said Brendan Crill, of both the Planck and BICEP2 teams from NASA’s Jet Propulsion Laboratory in Pasadena, Calif.
Quelle. D-News
Astronomie
« Zum vorherigen Eintrag Zum nächsten Eintrag »
2516 Views
Created with page4