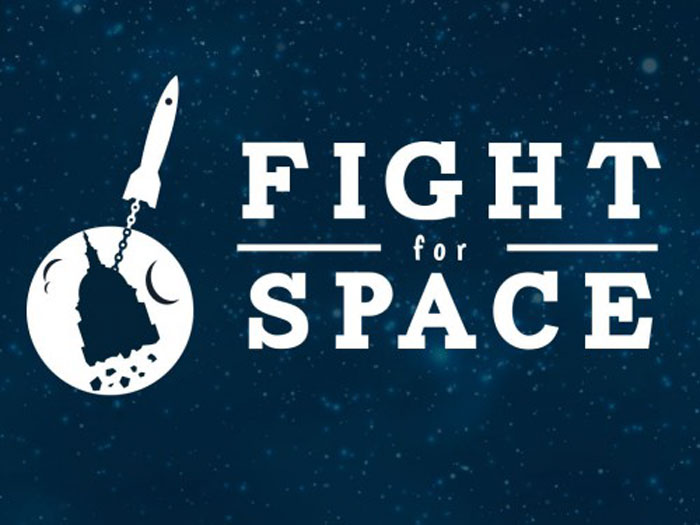 Three Days to 'Fight for Space': An Interview With Documentary Filmmaker Paul Hildebrandt

Last week, a United Launch Alliance (ULA) Atlas V rocket soared into the clear night sky above Cape Canaveral Air Force Station in Florida. The grumbling rocket carrying the U.S. Navy’s MUOS-3 satellite was watched by hundreds of thousands worldwide via social media and live stream, and while many watched in awe as the massive fireball made its way into the night, a generous amount of viewers probably did not know what the rocket was carrying or where the rocket launched from. Some viewers may have even called it a “NASA rocket” or even a “space shuttle,” which is actually a far, far cry from the truth.
A successful launch does not correlate to a successful space program. In fact, many of those privileged to have witnessed manned rocket launches and lunar landings would say we regressed over the past 40 years. This is a problem that needs to be resolved. Space exploration and discovery is no longer a priority in today’s society when space should really be our next frontier.
In his documentary film “Fight for Space,” Director and Producer Paul Hildebrandt explores the history of the U.S. Space Program, the NASA budget, and benefits of a thriving space-faring society—much different than the one we are living in right now. This independent documentary shares unique viewpoints of former NASA officials, commercial space entrepreneurs, astronauts, politicians, and scientists that want to see our space program back in action. This documentary was completely crowdfunded by a Kickstarter campaign with an unbelievably growing budget. Thanks to the support of many backers, “Fight for Space” has completed its filming and is now ready for post-production.
-

If fully funded, a copy of “Fight for Space” will be sent to every member of the U.S. House and Senate, to better educate the nations law makers on space policy issues.
(Image credit: Fight for Space)
-
AmericaSpace reached out to Hildebrandt to discuss the inspiration behind the documentary and how others can get involved in his “Fight for Space.”
As a child growing up in the ’80s and ’90s, Hildebrandt was always fascinated with manned lunar landings but never got to witness one himself. He often wondered when we were going to go back and if he would have the opportunity to see that within his lifetime, like millions of others who watched the historic Apollo lunar landings.
“They were very fortunate to see the moon landings, in my opinion,” said Hildebrandt. “They were very fortunate to be alive then, because it was such an inspiring attempt of a nation. It really brought the nation and the world together when the United States landed on the moon. The benefits of that? People were inspired to go into engineering, science, technology, and those advanced fields. It really benefitted the nation a great more than most people realize, and I think that’s something we have taken for granted. The benefits of the Apollo program were massive and people just take it for granted these days. I always wondered when we were going to go back. “
The cancellation of NASA’s Constellation Program was a major disappointment to Hildebrandt, and one of the reasons he felt compelled to create this documentary film.
“That was going to be our defining moment of when we were going to return to the moon and start to breed out the solar system,” he explained. “It was going to be the first step towards this great future that I envisioned.”
Another reason was the retirement of the 30-year Space Shuttle Program.
Through engaging interviews and the magnificent visuals of spaceflight, Hildebrandt expects his documentary film to touch as many people as possible. He wants people to understand the ways in which space exploration applies to them and how it can benefit their lives.
“I want them to learn about why space is important; why exploration in space is important; what it brings back; and what their dollar spent on NASA does for them.”
The story of the film became much more complicated as Hildebrandt continued filming. He admitted that he made “naïve budgeting decisions” and had no idea just how complex space policy was.
“I thought we only needed to interview certain people. I assumed these people had the answers when most of these people didn’t have the answers. I had to interview more people, go to more places, and do more research. That was a huge cost for us but it was important for me that we tell the truth and get all the details regarding why our space program is in the state it is today.”
“Fight for Space” has been a work-in-progress for over three years, and now it’s ready to go into post-production; however, “Fight for Space” cannot successfully fulfill this final step without YOUR help.
A second “Fight for Space” Kickstarter created to raise funds for the cost of post-production ends Feb. 1, and is far from reaching its $80,000 goal.
The $80,000 raised for the cost of post-production will allow those working on the film to have it completed by April-May 2015 and released/awarded to backers shortly after. The film will be distributed to every member on Congress to further educate on space policy issues. Additionally, the stock footage will be released to the public by the end of 2015.
Another goal is to have the film shown at limited theatrical screenings around the country and ready for public television broadcast later in 2015. They need money for a post-production technical mix, a musical score, archival footage, and freely available footage in the public domain that can be accessed by other filmmakers.
Here is how you can help:
Share this project on social media platforms- Facebook, Twitter, LinkedIn, etc.
Share this project through e-mail with your friends, family, co-workers, etc.
Talk about it with your friends in social settings and share the trailer
Pledge your choice amount of money towards the campaign ($5 can make a difference!)
Do you want to be a part of the cause for space exploration and discovery? Then support the “Fight for Space” Kickstarter Campaign and let your voice be heard! There are only three days left to fund the completion of this inspiring documentary film. Space advocates are encouraged to support the documentary, in exchange for which they can receive special gifts like a digital copy of the film, Blu-Ray, DVD, film poster, t-shirt, and much more! Explore the “Fight for Space” Kickstarter Campaign page for more information:
https://www.kickstarter.com/projects/420606009/fight-for-space-nasa-and-human-spaceflight-finishi
Raumfahrt
« Zum vorherigen Eintrag Zum nächsten Eintrag »
3076 Views
Created with page4