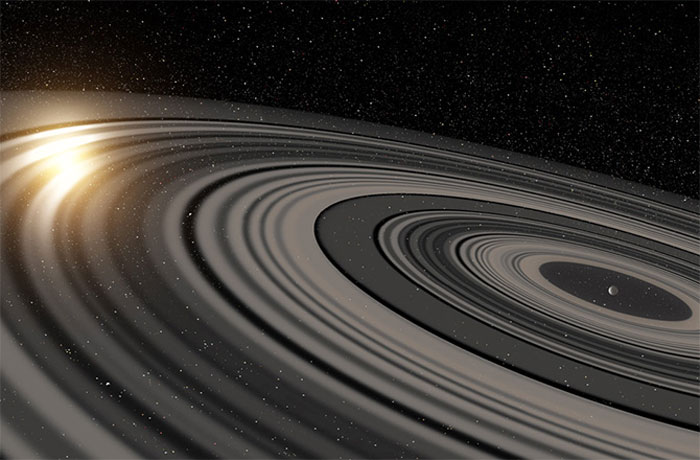 This artist’s concept shows the extrasolar ring system circling the young giant planet J1407b. The rings are shown eclipsing the young sun-like star J1407, as they would have appeared in early 2007. RON MILLER/UNIV. OF ROCHESTER
-
If you thought Saturn’s ring system was impressive, spare a thought for the rings surrounding the giant exoplanet J1407b — the rings of J1407b wouldn’t only dwarf Saturn’s, the system is so big that it eclipses the massive world’s host star!
J1407b’s ring system was the first of its kind to be discovered outside of the solar system in 2012, but in new research accepted for publication in the Astrophysical Journal, the awesome scale of the rings has been realized. Over 30 individual rings have been observed, each one tens of millions of miles in diameter, and between each concentric ring are gaps that indicate the presence of exomoons — not too dissimilar to Saturn’s ‘shepherd moons’ that continue to shape Saturn’s rings today.
During a recent eclipse event observed by the SuperWASP survey, when the exoplanet passed in front of its star, astronomers were able to study the light coming from the star as it passed behind the rings. Through analysis of the ‘light curve’ (the changing starlight signal over time), the true nature of the rings could be seen.
“The details that we see in the light curve are incredible,” said Matthew Kenworthy, of Leiden Observatory, The Netherlands, and lead author of the study. “The eclipse lasted for several weeks, but you see rapid changes on time scales of tens of minutes as a result of fine structures in the rings.
“The star is much too far away to observe the rings directly, but we could make a detailed model based on the rapid brightness variations in the star light passing through the ring system. If we could replace Saturn’s rings with the rings around J1407b, they would be easily visible at night and be many times larger than the full moon.”
According to co-author Eric Mamajek, of the University of Rochester, New York, the exoplanet is far more massive than Saturn or Jupiter and the ring system is 200 times larger than Saturn’s — around 120 million kilometers (75 million miles) wide. “You could think of it as kind of a super Saturn,” he said.
“(W)e see the rings blocking as much as 95 percent of the light of this young Sun-like star for days, so there is a lot of material there that could then form satellites,” added Mamajek, estimating that there is approximately 1-Earth mass-worth of finely ground material inside J1407b’s rings.
Although it has been long theorized that moons can form from the debris surrounding planets, until 2012, astronomers hadn’t found any example of a ringed gas giant beyond our solar system. But now they have a super-sized ring system surrounding a world orbiting another star that provides evidence for a system of exomoons embedded inside a vast ring system.
Quelle: D-News
Astronomie
« Zum vorherigen Eintrag Zum nächsten Eintrag »
2659 Views
Created with page4