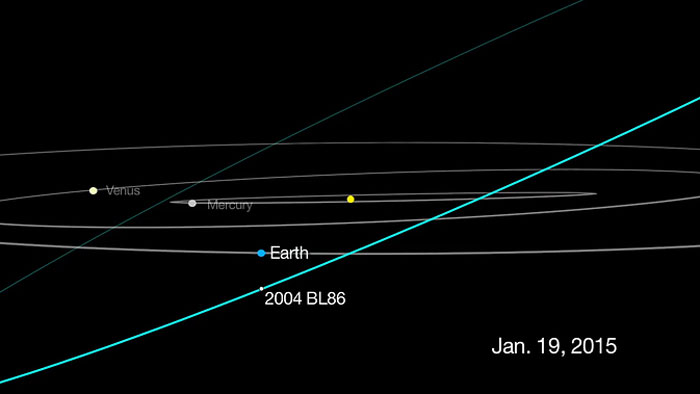 This graphic depicts the passage of asteroid 2004 BL86, which will come no closer than about three times the distance from Earth to the moon on Jan. 26, 2015.
Image Credit: NASA/JPL-Caltech
.
An asteroid, designated 2004 BL86, will safely pass about three times the distance of Earth to the moon on January 26. From its reflected brightness, astronomers estimate that the asteroid is about a third of a mile (0.5 kilometers) in size. The flyby of 2004 BL86 will be the closest by any known space rock this large until asteroid 1999 AN10 flies past Earth in 2027.
At the time of its closest approach on January 26, the asteroid will be approximately 745,000 miles (1.2 million kilometers) from Earth.
"Monday, January 26 will be the closest asteroid 2004 BL86 will get to Earth for at least the next 200 years," said Don Yeomans, who is retiring as manager of NASA’s Near Earth Object Program Office at the Jet Propulsion Laboratory in Pasadena, California, after 16 years in the position. "And while it poses no threat to Earth for the foreseeable future, it’s a relatively close approach by a relatively large asteroid, so it provides us a unique opportunity to observe and learn more."
One way NASA scientists plan to learn more about 2004 BL86 is to observe it with microwaves. NASA's Deep Space Network antenna at Goldstone, California, and the Arecibo Observatory in Puerto Rico will attempt to acquire science data and radar-generated images of the asteroid during the days surrounding its closest approach to Earth.
"When we get our radar data back the day after the flyby, we will have the first detailed images," said radar astronomer Lance Benner of JPL, the principal investigator for the Goldstone radar observations of the asteroid.  "At present, we know almost nothing about the asteroid, so there are bound to be surprises."
Asteroid 2004 BL86 was initially discovered on Jan. 30, 2004 by a telescope of the Lincoln Near-Earth Asteroid Research (LINEAR) survey in White Sands, New Mexico.
The asteroid is expected to be observable to amateur astronomers with small telescopes and strong binoculars.
"I may grab my favorite binoculars and give it a shot myself," said Yeomans. "Asteroids are something special. Not only did asteroids provide Earth with the building blocks of life and much of its water, but in the future, they will become valuable resources for mineral ores and other vital natural resources. They will also become the fueling stops for humanity as we continue to explore our solar system. There is something about asteroids that makes me want to look up."
NASA's Near-Earth Object Program Office is experiencing its first transition in leadership since it was formed almost 17 years ago. On Jan. 9, after a 39-year-long career at JPL, Yeomans retired. Paul Chodas, a long-time member of Yeomans’ team at JPL, has been designated as the new manager.
NASA detects, tracks and characterizes asteroids and comets using both ground- and space-based telescopes. Elements of the Near-Earth Object Program, often referred to as "Spaceguard," discover these objects, characterize a subset of them and identify their close approaches to determine if any could be potentially hazardous to our planet.
JPL manages the Near-Earth Object Program Office for NASA's Science Mission Directorate in Washington. JPL is a division of the California Institute of Technology in Pasadena.
Quelle: NASA
-
Update: 25.01.2015
-

Giant asteroid is about to give Earth a close call 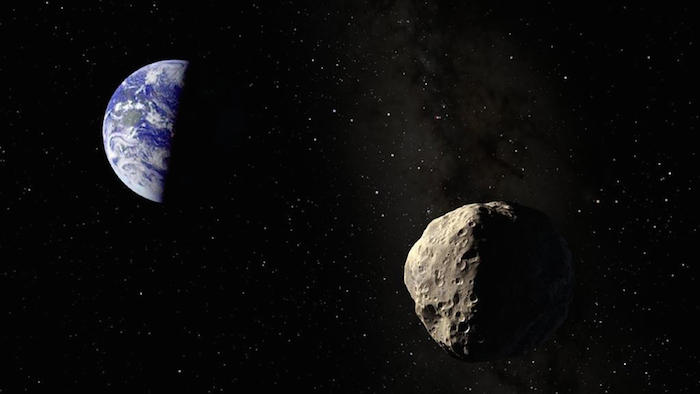 One of the largest known asteroids to threaten the Earth will make a close pass on Monday night, 26-27 January, coming to just three times the distance of the Moon from us. There is absolutely no danger of an impact from the mountain-sized rock, but the flyby, at a distance of 1.2 million km (745,000 miles) is the closest that any asteroid of its size will come until 2027.  Though a number of other asteroids have come closer in recent years, they have all been considerably smaller. The cosmic missile, labelled 2004 BL86 after the year in which it was discovered, is thought to be around 500 metres wide (a third of a mile). It orbits the Sun every 1.84 years, but usually crosses the Earth’s orbit when we are at a much greater distance from it. Asteroid 2004 BL86 will be close enough to be visible in backyard telescopes at a magnitude (brightness) of about 9.5 as it rapidly crosses the sky, covering 2.5°, or five times the apparent width of the Moon an hour when at its nearest. It will provide a challenge for astrophotographers with cameras capable of taking time exposures as it heads from the constellation of Hydra up through Cancer, passing close to the famous Beehive Cluster of stars, otherwise known as Praesepe or M44.

A NASA diagram of their orbits around the Sun illustrates how close asteroid 2004 BL86 will pass to the Earth on Monday night. Image credit: NASA/JPL-Caltech
As well as being a target for amateur astronomers, 2004 BL86 will also be studied closely by professional scientists. NASA scientists will use radio dishes in California and Puerto Rico to bounce signals off the asteroid, allowing them to make radar maps of the chunk of space rock.
It was discovered in 2004 by an automatic sky survey telescope called LINEAR, based in New Mexico, during its hunt for potentially hazardous objects such as asteroids and comets.
Don Yeomans, manager of NASA’s Near Earth Object Program Office in California, said in a statement: “Monday, January 26 will be the closest asteroid 2004 BL86 will get to Earth for at least the next 200 years. And while it poses no threat to Earth for the foreseeable future, it’s a relatively close approach by a relatively large asteroid, so it provides us a unique opportunity to observe and learn more.”
Because the asteroid comes as close as it does, its exact path against the starry background will vary depending from where in the world it is observed, so it is not possible to provide a general chart. Amateur astronomers can obtain positions for their own locations by visiting this NASA website and searching for 2004 BL86.
Robin Scagell, of the Society for Popular Astronomy, told Sen: “Spotting the asteroid won’t be easy, but it is well within reach of amateur telescopes and will make a fun challenge. Though you won’t actually see it moving, its motion across the sky will become evident in just a few minutes.
“Keen photographers can capture the asteroid by mounting the camera, equipped with a telephoto lens and focused on infinity, and taking a number of time exposures of 30 seconds or more, depending on the darkness of their sky.”
Quelle: SEN
-
Update: 26.01.2015
-
BRIGHT ASTEROID FLYBY--TONIGHT: A mountain-sized space rock is approaching Earth for a harmless but eye-catching close encounter on Monday night, Jan. 26-27. The incoming asteroid, named 2004 BL86, will be just 740,000 miles away (3.1 times farther from us than the Moon) and visible in ordinary binoculars. Click to view an 8-minute movie of the asteroid in motion, recorded during the early hours of Jan. 26th by Alberto Quijano Vodniza of Pasto, Narino, Colombia:

Quelle: Spaceweather
-
Update: 27.01.2015
-
Asteroid That Flew Past Earth Today Has Moon
Scientists working with NASA's 230-foot-wide (70-meter) Deep Space Network antenna at Goldstone, California, have released the first radar images of asteroid 2004 BL86. The images show the asteroid, which made its closest approach today (Jan. 26, 2015) at 8:19 a.m. PST (11:19 a.m. EST) at a distance of about 745,000 miles (1.2 million kilometers, or 3.1 times the distance from Earth to the moon), has its own small moon.
The 20 individual images used in the movie were generated from data collected at Goldstone on Jan. 26, 2015. They show the primary body is approximately 1,100 feet (325 meters) across and has a small moon approximately 230 feet (70 meters) across. In the near-Earth population, about 16 percent of asteroids that are about 655 feet (200 meters) or larger are a binary (the primary asteroid with a smaller asteroid moon orbiting it) or even triple systems (two moons). The resolution on the radar images is 13 feet (4 meters) per pixel.
The trajectory of asteroid 2004 BL86 is well understood. Monday's flyby was the closest approach the asteroid will make to Earth for at least the next two centuries. It is also the closest a known asteroid this size will come to Earth until asteroid 1999 AN10 flies past our planet in 2027.
Asteroid 2004 BL86 was discovered on Jan. 30, 2004, by the Lincoln Near-Earth Asteroid Research (LINEAR) survey in White Sands, New Mexico.
Radar is a powerful technique for studying an asteroid's size, shape, rotation state, surface features and surface roughness, and for improving the calculation of asteroid orbits. Radar measurements of asteroid distances and velocities often enable computation of asteroid orbits much further into the future than if radar observations weren't available.
NASA places a high priority on tracking asteroids and protecting our home planet from them. In fact, the U.S. has the most robust and productive survey and detection program for discovering near-Earth objects (NEOs). To date, U.S. assets have discovered over 98 percent of the known NEOs.
In addition to the resources NASA puts into understanding asteroids, it also partners with other U.S. government agencies, university-based astronomers, and space science institutes across the country, often with grants, interagency transfers and other contracts from NASA, and also with international space agencies and institutions that are working to track and better understand these objects.
NASA's Near-Earth Object Program at NASA Headquarters, Washington, manages and funds the search, study and monitoring of asteroids and comets whose orbits periodically bring them close to Earth. JPL manages the Near-Earth Object Program Office for NASA's Science Mission Directorate in Washington. JPL is a division of the California Institute of Technology in Pasadena.
In 2016, NASA will launch a robotic probe to one of the most potentially hazardous of the known NEOs. The OSIRIS-REx mission to asteroid (101955) Bennu will be a pathfinder for future spacecraft designed to perform reconnaissance on any newly discovered threatening objects. Aside from monitoring potential threats, the study of asteroids and comets enables a valuable opportunity to learn more about the origins of our solar system, the source of water on Earth, and even the origin of organic molecules that led to the development of life.
NASA's Goddard Space Flight Center in Greenbelt, Maryland, will provide overall mission management, systems engineering, and safety and mission assurance for OSIRIS-REx. Lockheed Martin Space Systems in Denver will build the spacecraft. OSIRIS-REx is the third mission in NASA's New Frontiers Program. NASA's Marshall Space Flight Center in Huntsville, Alabama, manages New Frontiers for the agency's Science Mission Directorate in Washington.
NASA also continues to advance the journey to Mars through progress on the Asteroid Redirect Mission (ARM), which will test a number of new capabilities needed for future human expeditions to deep space, including to Mars. This includes advanced Solar Electric Propulsion -- an efficient way to move heavy cargo using solar power, which could help pre-position cargo for future human missions to the Red Planet. As part of ARM, a robotic spacecraft will rendezvous with a near-Earth asteroid and redirect an asteroid mass to a stable orbit around the moon. Astronauts will explore the asteroid mass in the 2020’s, helping test modern spaceflight capabilities like new spacesuits and sample return techniques. Astronauts at NASA's Johnson Space Center in Houston have already begun to practice the capabilities needed for the mission.
-