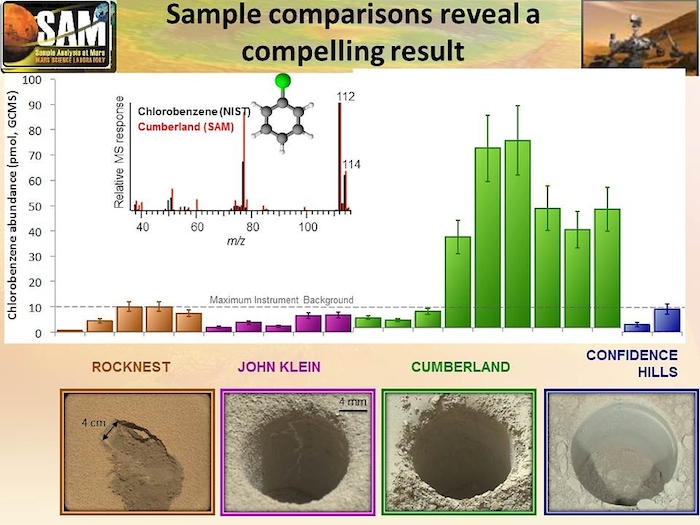 Comparing 'Cumberland' With Other Samples Analyzed by Curiosity
This graphic offers comparisons between the amount of an organic chemical named chlorobenzene detected in the "Cumberland" rock sample and amounts of the same compound in samples from three other Martian surface targets analyzed by NASA's Curiosity Mars rover.
The amounts of chlorobenzene that Curiosity's Sample Analysis at Mars (SAM) laboratory detected in samples from the "Rocknest" Martian soil target and the "John Klein" and "Confidence Hills" rock targets were at or below the background level in the instrument. The amount in Cumberland is much higher than all the others, as indicated in the green bars on a vertical scale of picomoles measured with SAM's gas chromatograph mass spectrometer system (GCMS). The lower portion of the graphic shows images from the scoop divot at Rocknest and drill holes at the rock targets. The inset graph shows how the mass spectrum of the chemical found by SAM in the Cumberland sample closely matches that of a chlorobenzene laboratory standard from the National Institute of Standards and Technology (NIST) database.
The chlorobenzene may have resulted from reaction of Martian organic chemicals with Martian perchlorate during the process of heating the sample in SAM, so the precursor identities of Martian organic molecules in the rock remain to be determined.
Analysis of the Cumberland sample by SAM yielded the first definitive detection of any Martian organic chemicals in material on the surface of Mars. Organic chemicals, which contain carbon and usually hydrogen, are molecular building blocks of life, although they can be made without life's presence. Martian organics could have been produced on Mars or delivered to Mars aboard meteorites.
NASA's Mars Science Laboratory Project is using Curiosity to assess ancient habitable environments and major changes in Martian environmental conditions. NASA's Jet Propulsion Laboratory, a division of the California Institute of Technology, Pasadena, built the rover and manages the project for NASA's Science Mission Directorate, Washington. NASA's Goddard Space Flight Center, Greenbelt, Maryland, built and operates SAM.
Image credit: NASA/JPL-Caltech
- 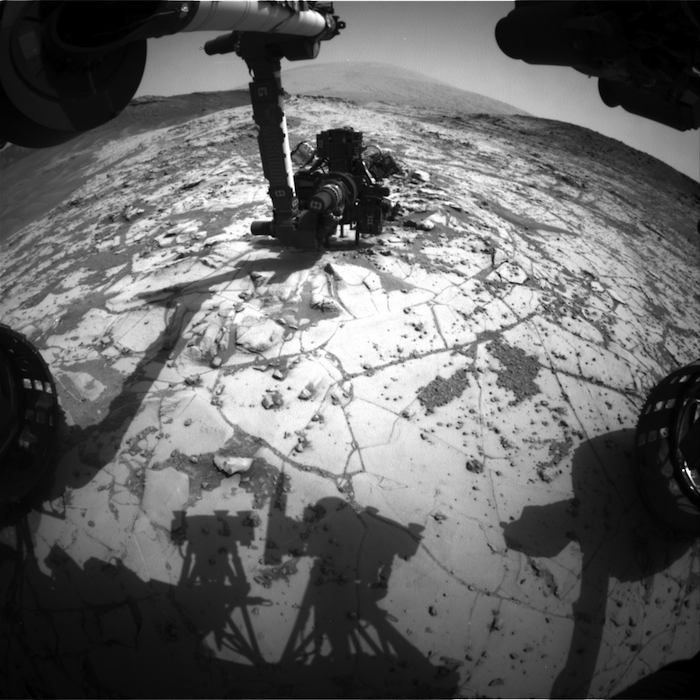 Curiosity Conducting Mini-Drill Test at 'Mojave'
This view from the wide-angle Hazard Avoidance Camera (Hazcam) on the front of NASA's Curiosity Mars Rover shows the rover's drill in position for a mini-drill test to assess whether a rock target called "Mojave" is appropriate for full-depth drilling to collect a sample.  It was taken on Jan. 13, 2015, during the 867th Martian day, or sol, of Curiosity's work on Mars.
The rover team selected Mojave as the mission's second drill-sampling candidate on Mount Sharp.  A higher portion of the mountain is visible on the horizon. A key appeal of this target is an abundance of crystal-shaped features evident when Curiosity used its dust-removal tool here in November 2014, as shown in PIA19077. The target is in the "Pink Hills" area near the lower edge of the "Pahrump Hills" outcrop in the basal layer of Mount Sharp.
NASA's Jet Propulsion Laboratory, a division of the California Institute of Technology, Pasadena, manages the Mars Science Laboratory Project for NASA's Science Mission Directorate, Washington. JPL designed and built the project's Curiosity rover and the rover's Hazcams.
- 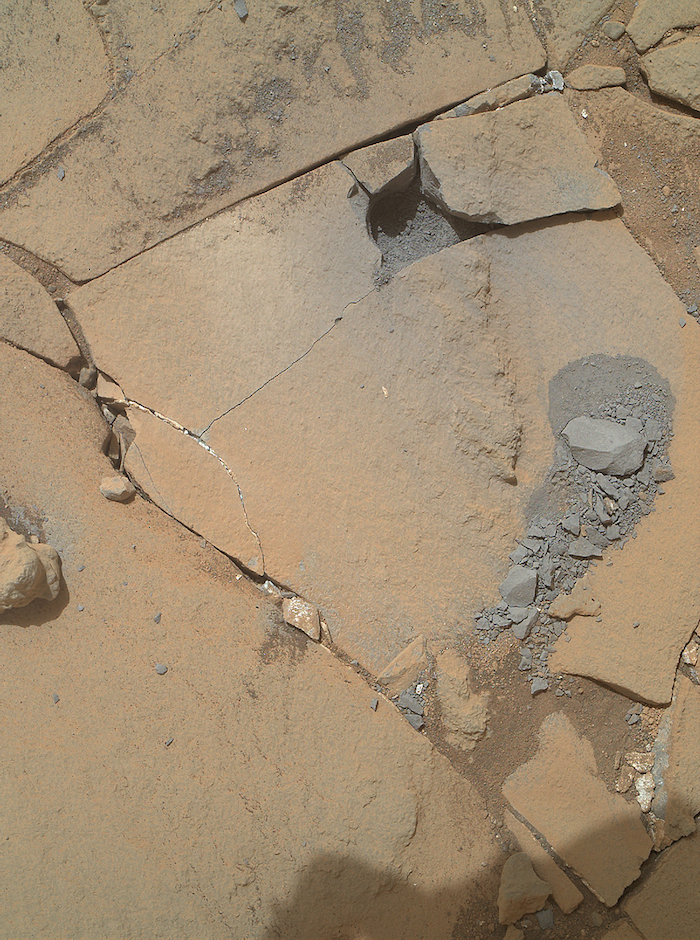 Results from Curiosity's Mini-Drill Test at 'Mojave'
This view from the Mars Hand Lens Imager (MAHLI) camera on the arm of NASA's Curiosity Mars rover shows some of the outcome from a shallow-depth, mini-drill test to assess whether a rock target called "Mojave" is appropriate for full-depth drilling to collect a sample. It was taken on Jan. 13, 2015, during the 867th Martian day, or sol, of Curiosity's work on Mars.
The drill cuts a hole about 0.63 inch (1.6 centimeters) in diameter. The hole from the shallow drilling test is near the top of this image. The test drilling cracked the target rock and dislodged pieces of it. A few hours after seeing the results of this test, the rover team is evaluating whether an alternate target location in this area would make an appropriate site for sample-collection drilling, and meanwhile planning close-up investigation of the resulting rock fragments with freshly exposed surfaces, particularly the grayish one on the right-hand side of the image. On Earth, field geologists carry rock hammers to crack rocks and expose fresh surfaces, but this is an unusual opportunity in a Mars rover mission.
NASA's Jet Propulsion Laboratory, a division of the California Institute of Technology, Pasadena, manages the Mars Science Laboratory Project for NASA's Science Mission Directorate, Washington. JPL designed and built the project's Curiosity rover.
Quelle: NASA
Mars-Chroniken
« Zum vorherigen Eintrag Zum nächsten Eintrag »
2829 Views
Created with page4