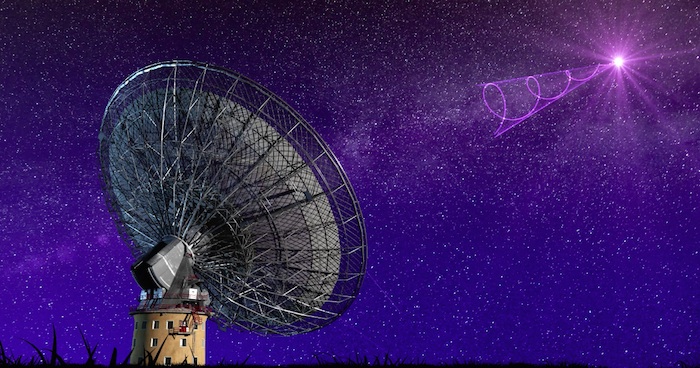 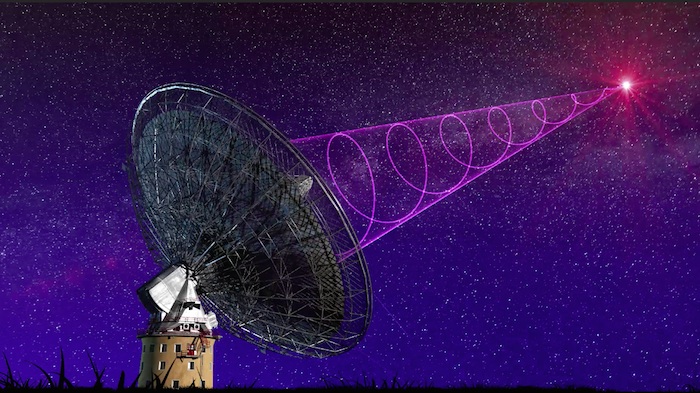 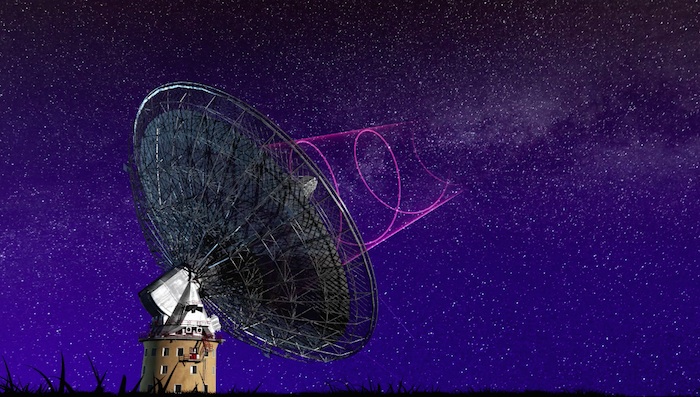 Snap! Astronomers using CSIRO’s 64-m Parkes radio telescope in eastern Australia have for the first time seen a ‘fast radio burst’ — a short, sharp flash of radio waves from an unknown source — happening live.
This brings us a step closer to understanding the phenomenon, which astronomers worldwide are vying to explain. The finding is published today in Monthly Notices of the Royal Astronomical Society.
Lasting only milliseconds, the first such radio burst was discovered in 2007 by astronomers combing the Parkes data archive for unrelated objects.
Six more bursts, apparently from outside our Galaxy, have now been found with Parkes and a seventh with the Arecibo telescope in
Puerto Rico.
"These bursts were generally discovered weeks or months or even more than a decade after they happened! We’re the first to catch one in real time," said Emily Petroff, a CAASTRO PhD candidate co-supervised by CSIRO and by Swinburne University of Technology in Melbourne.
Banking that she’d spot a ‘live’ burst, Petroff had an international team poised to make rapid follow-up observations, at wavelengths from radio to X-rays.
After Parkes saw the burst go off the team swung into action on twelve telescopes around the world — in Australia, California, the Canary Islands, Chile, Germany, Hawai’i, and India — and in space.
No optical, infrared, ultraviolet or X-ray counterpart showed up. "That in itself rules out some possible candidates, such as long gamma-ray bursts and nearby supernovae," said team member Dr Mansi Kasliwal of the Carnegie Institution in Pasadena, California.
But short or low-energy gamma-ray bursts and giant flares from distant magnetars (the most magnetic stars in the Universe) are still contenders, she added. So too are imploding neutron stars.
One of the big unknowns of fast radio bursts is their distances. The characteristics of the radio signal — how it is 'smeared out' in frequency from travelling through space — indicate that the source of the new burst was up to 5.5 billion light-years away.
"That means it could have given off as much energy in a few milliseconds as the Sun does in a day," said team member Dr Daniele Malesani of the University of Copenhagen.
The burst left another clue as to its identity, but a puzzling one. Parkes’s real-time detection system captured its polarisation — something that had not been recorded for previous bursts.
Polarisation can be thought of as the direction electromagnetic waves, such as light or radio waves, 'vibrate'. It can be linear or circular. The radio emission from the new fast radio burst was more than 20% circularly polarised—which hints that there are magnetic fields near the source.
Identifying the origin of the fast radio bursts is now only a matter of time.
"We’ve set the trap," said Petroff. "Now we just have to wait for another burst to fall into it."
CAASTRO is a collaboration between Curtin University, The University of Western Australia, the University of Sydney, the Australian National University, the University of Melbourne, Swinburne University of Technology and the University of Queensland. It is funded under the Australian Research Council Centre of Excellence program and receives additional funding from the seven participating universities and the NSW State Government Science Leveraging Fund.
Quelle: CAASTRO
Astronomie
« Zum vorherigen Eintrag Zum nächsten Eintrag »
2595 Views
Created with page4