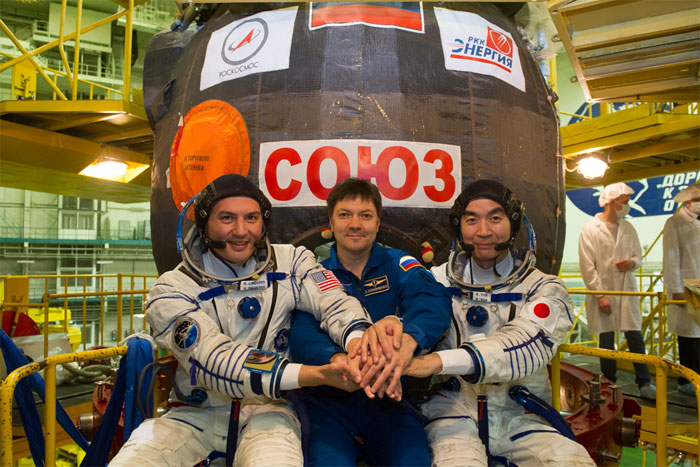 Yui and the other backup crew pose for a photo in front of the Soyuz TMA-15M spacecraft (Credit: Roscosmos)

Astronaut Kimiya Yui, who was assigned as a long-duration crew member for the ISS Expedition 44/45 mission, served as backup member to the 41s prime crew right up until the launch of the Soyuz TMA-15 spacecraft on November 24.
In early November, the 41S prime crew and backup crew stayed in Star City, Russia. During their stay, as part of traditional preflight events featuring visits in the vicinity which is linked to the history of Russian space development, they visited a museum in Star City and Red Square in Moscow.
Subsequently, the prime and backup crews moved to Baikonur, Kazakhstan on November 11 and 12, respectively.
In Baikonur, they worked on the final launch preparations. The crews boarded the Soyuz TMA-15M spacecraft, which had been engaged in final preparations, to check its operability and loaded cargo. They also used a Soyuz simulator to confirm the operational procedures and to check their health status, they underwent daily medical checkups right up to launch date.
Just before launch, the duty of the backup crew was dismissed and the Soyuz spacecraft carrying the 41S crew was launched at 06:01 a.m. on November 24, from the Baikonur Cosmodrome.
Yui will continue training for his ISS long-duration mission, scheduled for half a year later.
- 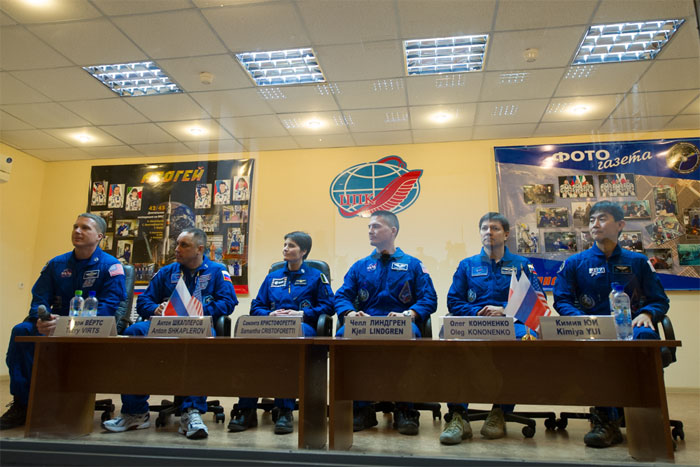 The 41S prime crew and its backup crew at the press conference (Credit: Roscosmos)
-
Astronaut Takuya Onishi continues his training for an ISS long-duration mission: Onishi participates in NOLS in the U.S.
Astronaut Takuya Onishi, who was assigned as a crew member for the Expedition 48/49 mission to the International Space Station (ISS), underwent training for this long-duration mission in the U.S. at the beginning of November, followed by Russia in the second half of the month.
From November 3-10, Onishi participated in the National Outdoor Leadership School (NOLS) held in New Mexico, U.S.
Training at NOLS this time involved camping for about a week while traveling in mountainous areas, aiming to inculcate behavioral ability within a team (self-management, leadership, followership, teamwork, and decision-making skills).
They spent about a week in the Gila National Forest, where a wealth of nature such as forest, steppe, hills, and rocks can be appreciated. The participants took turns to take the lead on different days and enhanced their teamwork ability under various types of leadership. Onishi also had the opportunity to experience being a leader and developed a schedule taking all the opinions of members, their health, and weather into consideration and accomplished a goal.
At the GCTC in Russia, training was held for the Soyuz spacecraft and ISS Russian segment. Since November, a series of simulation training has also got underway, featuring a Russian cosmonaut on Soyuz spacecraft operations, which resemble real operations more closely. During a flight, as the left-seater (co-pilot), Onishi will support the Soyuz commander.
Using a simulator, the crew practiced a series of operations from the launch of the Soyuz rocket, rendezvous, and docking with the ISS, and atmospheric re-entry operations after undocking from the same. During the training, emergencies such as fire, rapid depressurization, and air leaks were simulated. Onishi learned how to respond to them and return to Earth safely. Up to the launch, such simulations will be repeated to enhance the crew’s overall performance skills.
For the Russian segment, he trained for the Thermal Control System, Motion Control and Navigation systems, and Russian communications systems.
-
Astronaut Norishige Kanai learns about how to maintain T-38 jet trainers
From November 3-14, Astronaut Norishige Kanai studied maintenance training for the T-38 jet trainers in Ellington Airport, Texas.
The objective of this training was to familiarize participants with tool usage and hardware handling by maintaining T-38 jet trainers. As the ISS astronauts engage in setting up and maintaining onboard systems and experimental hardware, such training is included to help them acquire and improve basic techniques and knowledge.
Instructed by the mechanic, Kanai used different tools and serviced the hardware removal and installation in a jet trainer.
-
Astronaut Akihiko Hoshide undergoes training in a hypobaric environment
At the JAXA Tsukuba Space Center (TKSC), astronaut Akihiko Hoshide underwent training to adapt to a hypobaric environment.
This training can help show how a hypobaric environment or rapid depressurization affects the human body. Since awareness of hypoxic symptoms at an early stage under a hypobaric environment and experiencing changes caused by rapid depressurization are critical for a safe flight, astronauts regularly undergo such training.
In the training facility, Hoshide and other trainees solved easy math problems to ascertain any changes in thinking ability during hypoxic conditions and also experienced rapid depressurization. 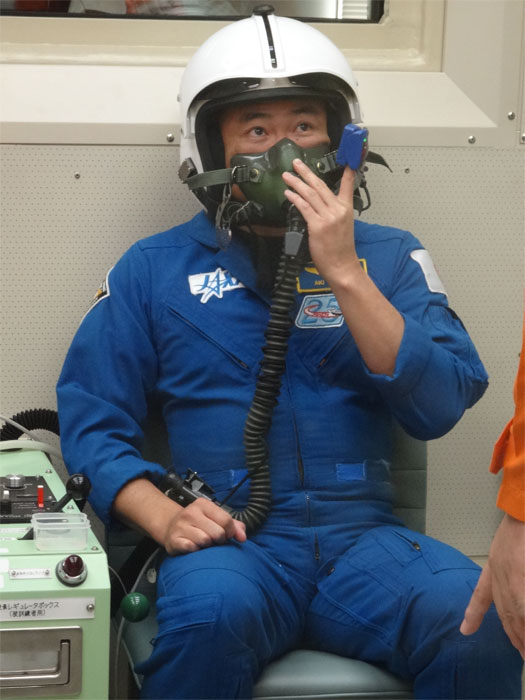