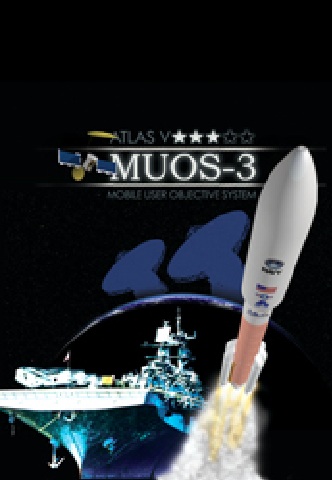 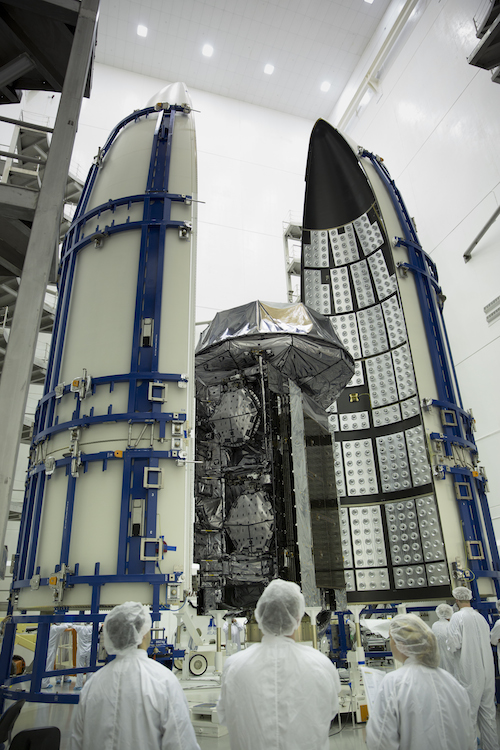 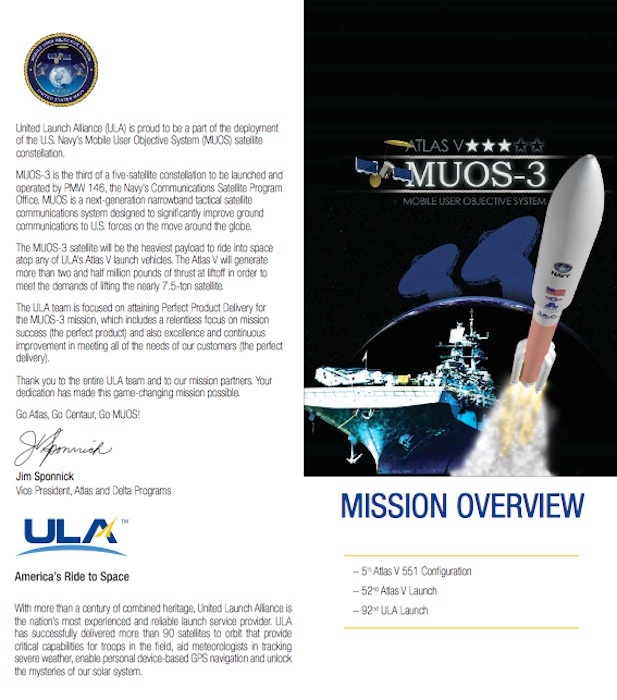 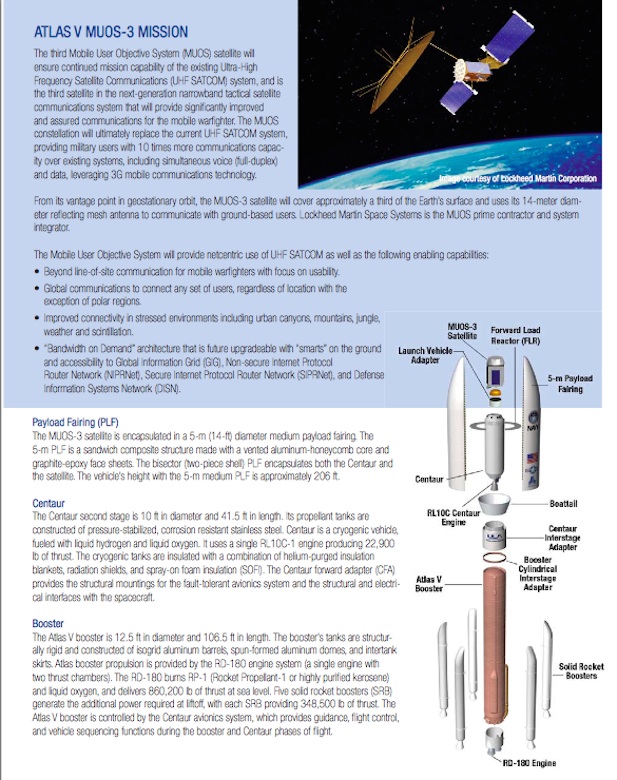 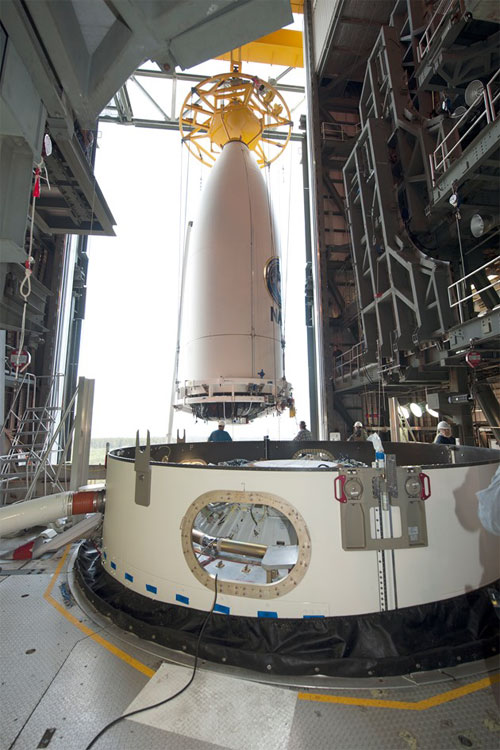 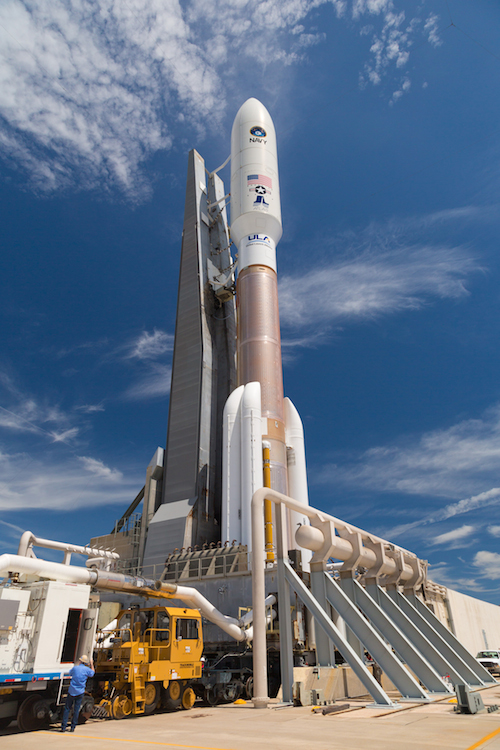 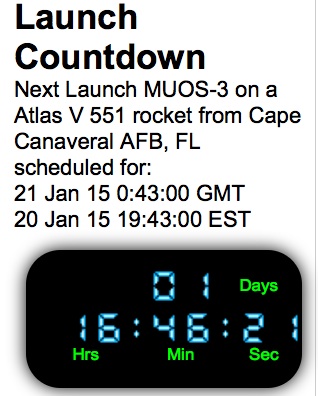 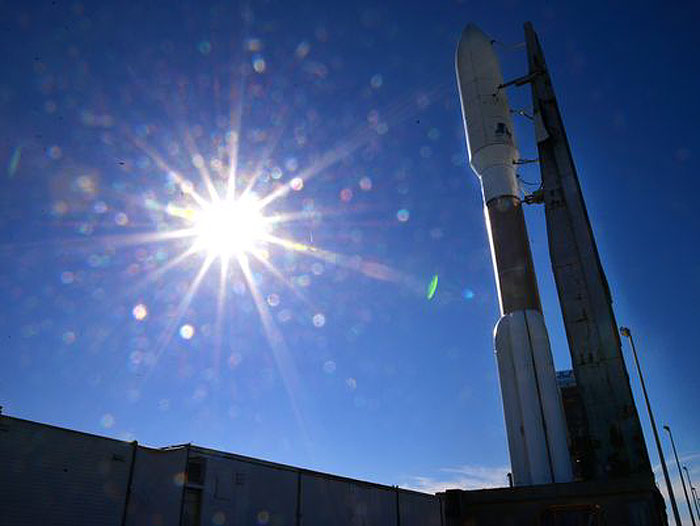 On Monday morning, a ULA Atlas V carrying a MUOS-3 communications satellite for the U.S. Navy rolled from the Vertical Integration Building to Launch Complex 41. Launch is scheduled for 7:43 Tuesday night.
.
CAPE CANAVERAL – The most frequently launched version of Atlas V rockets might linger on the pad for a moment after their main engine ignites, building up the thrust to climb slowly but surely upward, unassisted by any solid rocket motors.
"You're sitting there looking at it going, 'Come on, come on, let's go,' " said Gary Haugh, a United Launch Alliance technician who has worked on Atlas rockets for 30 years. "You see the smoke and stuff coming out of the flame bucket, and it tends to sit there."
That won't be the case tonight, when five solid motors strapped to the base of the the 206-foot Atlas V — its most powerful version — will help the rocket bolt from Launch Complex 41 with its heaviest payload ever, a 7.5-ton U.S. Navy communications satellite.
"When it lights off with the five solids, most people in the area know it," said Haugh. "It gets out of here pretty fast."
The launch is scheduled for 7:43 p.m., the opening of a 44-minute window. The weather forecast is favorable, with only a 20 percent chance that thick clouds could get in the way.
The mission is the first of 10 planned this year from Cape Canaveral Air Force Station by ULA, the Boeing-Lockheed Martin joint venture that is the government's exclusive launcher of national security payloads.
This one is the Navy's third Mobile User Objective System spacecraft, or MUOS, billed as a smart phone network in the sky for warfighters on the move.
The large, heavy satellite is bound for a high orbit more than 22,000 miles over the equator.
The first two satellites in the series used the same powerful version of the Atlas V. Out of 51 Atlas V missions to date, only two others have: NASA probes headed to Pluto and Jupiter.
"The reason you've got the five solids is usually for the weight of the payloads, or you want to get out of here real quick," Haugh explained.
The Merritt Island resident helped ready the five Aerojet Rocketdyne solid motors to be trucked to the Cape from their North Florida storage facility.
Then he was part of the team that attached the motors to the Atlas V booster, one at a time, grouping three on one side and a pair opposite them.
Each stands nearly 56 feet tall, measures more than five feet around and produces almost 350,000 pounds of thrust at liftoff.
That translates to more giddy-up and "a lot of loud roar and rumbling," said Haugh.
From down the road at the Atlas Spaceflight Operations Center, he expects to hear windows rattle and feel the solid motors' pop.
Nearly two minutes into flight they should burn out and fall away. If the sky is clear enough, spectators will see their engines' red glow tumbling toward the ocean.
It will feel good to see the solid motors he handled complete their job, but Haugh knows the mission won't be a success until the rocket's Centaur upper stage deploys the MUOS-3 satellite nearly three hours after launch.
For the longtime rocket technician who has worked more than 130 launches, there's daily enjoyment in the unusual, hands-on work he performs along a beautiful coastline he first visited as a surfer from St. Petersburg.
And there's satisfaction each time an Atlas delivers an important payload to orbit.
"There's not many people in the world that do this," he said. "There's a lot of pride involved launching satellites which support our military people, and others."
Contact Dean at 321-242-3668 or jdean@floridatoday.com. Follow him on Twitter at @flatoday_jdean
Rocket: United Launch Alliance Atlas V (551 configuration)
Mission: U.S. Navy's third Mobile User Objective System (MUOS) satellite
Launch time: 7:43 p.m. EST Tuesday
Launch window: 44 minutes (to 8:26 p.m.)
Launch complex: 41 at Cape Canaveral Air Force Station
Weather: 80 percent "go"
Visit floridatoday.com for live countdown coverage starting at 6:30 p.m.
Quelle: Florida Today
--
Update: 22.40 MEZ

...
Update: 21.01.2015
.
Lift-off, Signal Acquired for Navy Communications Satellite
CAPE CANAVERAL, Fla. (NNS) (NNS) -- The Navy's third Mobile User Objective System (MUOS) satellite was launched today at 8:04 p.m. EST from Space Launch Complex 41. This communications satellite will significantly improve capability for Navy and Department of Defense tactical operators.
Over the next several days, the satellite will transition to its geosynchronous orbit location 22,000 miles above Earth. Its solar arrays and mesh antennas will then be deployed and on-orbit testing will begin for eventual commissioning into service.
Upon acceptance for operational use, MUOS 3 along with MUOS 1 and 2 already on-orbit, will provide communications coverage to more than three-quarters of the globe.
"This MUOS 3 launch is another major milestone to achieving the next generation of global tactical satellite communications capability for the Department of Defense," said Navy Capt. Joe Kan, MUOS program manager. "It's very visible evidence of the tremendous talent and dedication of our integrated joint service, government and contactor team."
MUOS operates like a smartphone network from space, vastly improving secure satellite communications for mobile U.S. forces. Unlike its predecessor system, MUOS provides users a global, on-demand, beyond-line-of-sight capability to transmit and receive high-quality voice and mission data using a high-speed Internet Protocol-based system.
According to Nina Tran, MUOS space division director, successful launch was the culmination of many months of meticulous preparation.
"Before the spacecraft was shipped to the Cape, there was an 18-month effort where we went through baseline, environmental and final testing to ensure once we get this vehicle on-orbit it's reliable and fulfills its mission," explained Tran, who oversees the design, build, test and delivery of MUOS space vehicles. "Once the spacecraft arrived at the Cape we had a team of engineers who went through an intensive period of vehicle testing, then fueling and integration with the launch vehicle."
One of the key advantages MUOS will bring is increased capacity. There will be a 10-fold increase in the number of simultaneous users supported across the system. It brings higher data rates and the ability to reliably communicate in more challenging environments. Additional advantages include global reach and increased accessibility to military networks by the tactical users
MUOS provides satellite communications in the narrowband spectrum. Although narrowband communication is less than 2 percent of total DoD bandwidth, it represents more than 50 percent of all DoD satellite communication users. In addition to ad-hoc situations such as disaster response, narrowband represents the majority of communications for SEAL teams in Afghanistan and ground patrols in Iraq.
While the third launch is a key milestone, much work is still underway to provide secure, worldwide coverage. "Right now we need to ensure the system works end-to-end," said Jim Parsons, MUOS technical director. "We're in the process of doing that by connecting an Army radio program, an Army waveform development program, our Navy satellites and ground system and DoD teleports to ensure that all elements work together as designed."
For operators, the services will procure new radios or upgrade existing radios with the MUOS capability. Examples of warfighter's devices currently developing the MUOS capability include: General Dynamics (PRC-155 and USC-61), Harris (PRC-117G), Rockwell Collins (ARC-210), Raytheon (ARC-231) and others. The MUOS software waveform is now available to industry for implementation on their software defined radio products. The specific MUOS services provided depend on the capabilities of a particular radio and mission needs of the warfighting community using that radio.
Two MUOS satellites, launched in 2012 and 2013, are already providing legacy communications capability from their geosynchronous orbits over the Pacific Ocean and Continental United States. Ultimately, the constellation and associated network will extend narrowband communications availability well past 2025.
The Navy's Program Executive Office for Space Systems, located at the Space and Naval Warfare Systems Command in San Diego, is responsible for the MUOS program.
Quelle: US-NAVY
-
Frams von Start: ULA
-