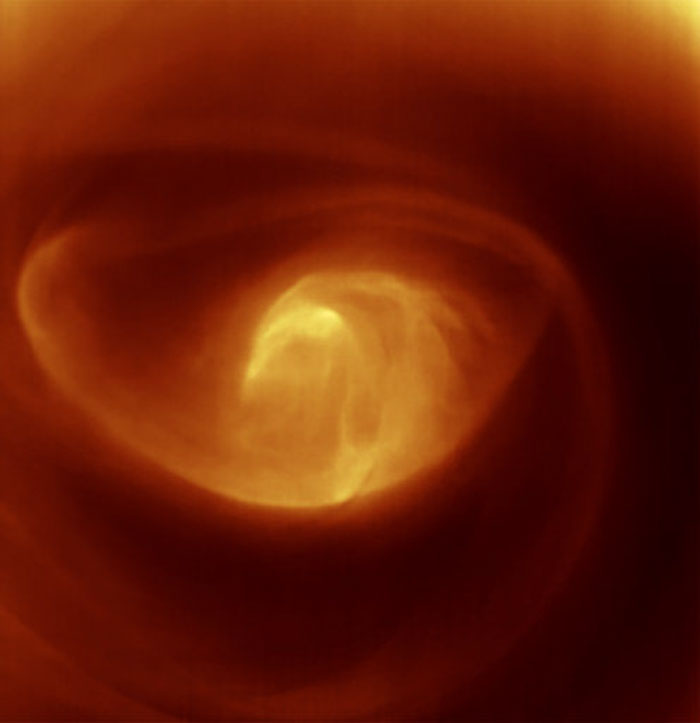 This ghostly puff of smoke is actually a mass of swirling gas and cloud at Venus’ south pole, as seen by the Visible and Infrared Thermal Imaging Spectrometer (VIRTIS) aboard ESA’s Venus Express spacecraft.
Venus has a very choppy and fast-moving atmosphere – although wind speeds are sluggish at the surface, they reach dizzying speeds of around 400 km/h at the altitude of the cloud tops, some 70 km above the surface. At this altitude, Venus’ atmosphere spins round some 60 times faster than the planet itself. This is very rapid; even Earth’s fastest winds move at most about 30% of our planet’s rotation speed. Quick-moving Venusian winds can complete a full lap of the planet in just four Earth days.
Polar vortices form because heated air from equatorial latitudes rises and spirals towards the poles, carried by the fast winds. As the air converges on the pole and then sinks, it creates a vortex much like that found above the plughole of a bath. In 1979, the Pioneer Venus orbiter spotted a huge hourglass-shaped depression in the clouds, some 2000 km across, at the centre of the north polar vortex. However, other than brief glimpses from the Pioneer Venus and Mariner 10 missions in the 1970s, Venus’ south pole had not been seen in detail until ESA’s Venus Express first entered orbit in April 2006.
One of Venus Express’ first discoveries, made during its very first orbit, was confirming the existence of a huge atmospheric vortex circulation at the south pole with a shape matching the one glimpsed at the north pole.
This south polar vortex is a turbulent mix of warming and cooling gases, all surrounded by a ‘collar’ of cool air. Follow-up Venus Express observations in 2007, including this image, showed that the core of the vortex changes shape on a daily basis. Just four hours after this image the vortex looked very different and a day later it had morphed into a squashed shape unrecognisable from the eye-like structure here.
A video of the vortex, made from 10 images taken over a period of five hours, can be seen here. The vortex rotates with a period of around 44 hours.
The swirling region shown in this VIRTIS image is about 60 km above the planet’s surface. Venus’ south pole is located just up and to the left of the image centre, slightly above the wispy ‘eye’ itself.
This image was obtained on 7 April 2007 at a wavelength of 5.02 micrometres. It shows thermal-infrared emission from the cloud tops; brighter regions like the ‘eye’ of the vortex are at lower altitude and therefore hotter.
-

This triple image provides a close-up view of the double-eyed vortex at Venus south pole, as seen by the Ultraviolet/Visible/Near-Infrared spectrometer (VIRTIS) on board ESA’s Venus Express. The images were taken on 29 May 2006, from a distance of about 64 000 kilometres from the planet.
. 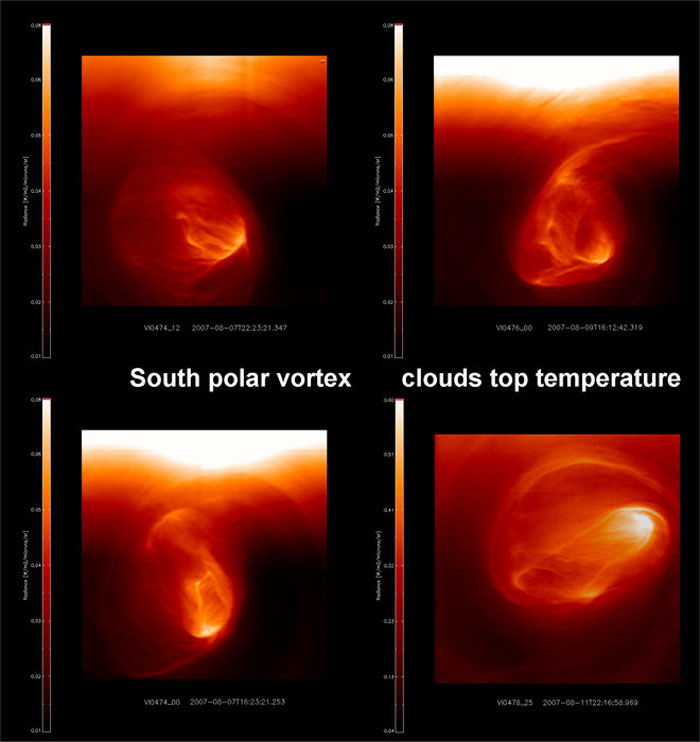 This beautiful set of infrared images of the south polar vortex at Venus was obtained by the Visible and Infrared Thermal Imaging Spectrometer (VIRTIS) on board ESA’s Venus Express.
The images, taken during four different observations performed over three orbits in August 2007, show variations in the shape of the vortex and also provide clues on the temperature variation in the clouds.
They were obtained at a distance of about 66 000 km from the planet’s surface, at wavelengths of 3.8 micrometres (top left, down left, top right) and 5 micrometres (bottom right).
-

This clip is composed of a mosaic of the southern hemisphere of Venus, as imaged by the Visible and Infrared Thermal Imaging Spectrometer (VIRTIS) on board ESA’s Venus Express. The south polar atmospheric dipole is seen at different wavelengths.
The images were acquired during three observations sessions in May 2006, at a distance of about 65 000 km above the surface.
Quelle: ESA
Astronomie
« Zum vorherigen Eintrag Zum nächsten Eintrag »
2803 Views
Created with page4