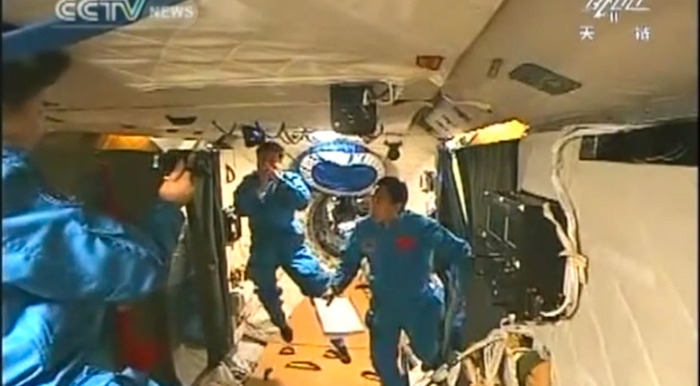 While there are no specific plans for an ESA astronaut mission to China’s space station Tiangong-1 (above, onboard are taikonauts from China's Shenzhou 9 mission), ESA and China are actively working to realize that goal. Credit: China Central Television screen grab

PARIS — The European Space Agency is actively working with China with the goal of placing a European astronaut on the Chinese space station as part of a relationship that is likely to grow now that ESA governments have made China one of three long-term strategic partners for the agency, ESA Director-General Jean-Jacques Dordain said Jan. 16.
For the moment, Dordain said, there are no specific plans for an ESA astronaut mission aboard China’s space station. But government ministers from the 20-nation ESA — to become 22 nations in the coming weeks with the addition of Hungary and Estonia — in December for the first time formally listed China alongside the United States and Russia as core ESA strategic partners.
ESA astronauts have visited China’s astronaut-training facilities and several are learning to speak Chinese as part of ESA’s partnership with the China Manned Space Flight Office, Dordain said.
Quelle: SN
Raumfahrt
2619 Views
Created with page4