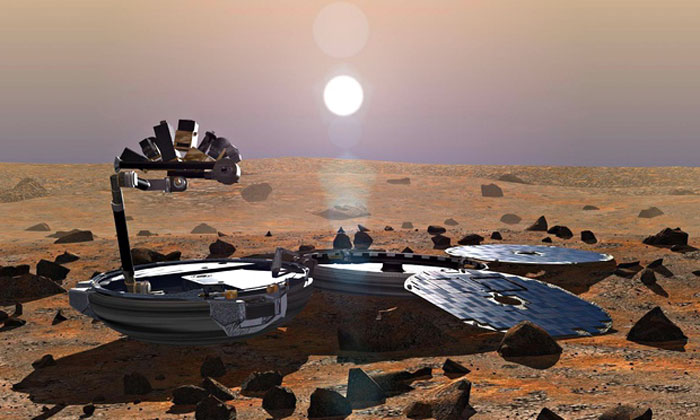 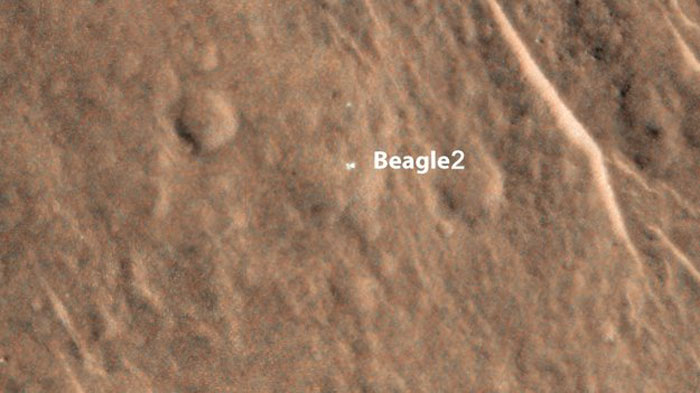 Colour image of Beagle-2 on Mars
.
BEAGLE-2 LANDER FOUND ON MARS
The UK-led Beagle-2 Mars lander, which hitched a ride on ESA’s Mars Express mission and was lost on Mars since 2003, has been found in images taken by a NASA orbiter at the Red Planet.
Beagle-2 was released from its mother craft on 19 December 2003 and was due to land six days later. But nothing was heard from the lander after its scheduled touchdown, and searches by Mars Express and NASA’s Mars Odyssey mission were fruitless.
Now, over a decade later, the lander has been identified in images taken by the high-resolution camera on NASA’s Mars Reconnaissance Orbiter. The lander is seen partially deployed on the surface, showing that the entry, descent and landing sequence worked and it did indeed successfully land on Mars on Christmas Day 2003.
. 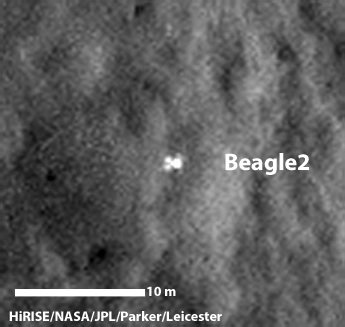 The UK-led Beagle-2 Mars lander, which hitched a ride on ESA’s Mars Express mission and was lost on Mars since 2003, has been found in images taken by NASA’s Mars Reconnaissance Orbiter. This close-up image has been sharpened to show possible details of the Beagle-2 lander on the surface of Mars.
.
“We are very happy to learn that Beagle-2 touched down on Mars. The dedication of the various teams in studying high-resolution images in order to find the lander is inspiring,” says Alvaro Giménez, ESA’s Director of Science and Robotic Exploration.
“Not knowing what happened to Beagle-2 remained a nagging worry. Understanding now that Beagle-2 made it all the way down to the surface is excellent news,” adds Rudolf Schmidt, ESA’s Mars Express project manager at the time.
The high resolution images were initially searched by Michael Croon, a former member of the Mars Express operations team at ESA’s Space Operations Centre, ESOC, in Darmstadt, Germany, working in parallel with members of the Beagle-2 industrial and scientific teams.
The small size of Beagle-2 – less than 2 m across when fully deployed – meant this was a painstaking endeavour, right at the limit of the resolution of cameras in orbit around Mars.
After the identification of potential counterparts to Beagle-2 in the expected landing of Isidis Planitia, a large impact basin close the martian equator, further images were obtained and analysed by the camera team, the Beagle-2 team and NASA’s Jet Propulsion Laboratory.
The images show the lander in what appears to be a partially deployed configuration, with only one, two or at most three of the four solar panels open, and with the main parachute and what is thought to be the rear cover with its pilot/drogue parachute still attached close by.
The size, shape, colour and separation of the features are consistent with Beagle-2 and its landing components, and lie within the expected landing area at a distance of about 5 km from its centre.
Quelle: ESA
.
Update: 17.01.2015
.

The UK-led Beagle 2 Mars lander, thought lost on the red planet since 2003, has been found partially deployed on the Martian surface. New images show that it successfully touched down on the planet's surface in 2003 but failed to deploy all four of its solar panels, thereby allowing no communication with scientists on Earth. The discovery was made possible thanks to new images from the HiRISE camera on NASA's Mars Reconnaissance Orbiter, which show that Beagle 2 landed within 5 km of its target area in the Isidis Planitia region of Mars.
Beagle 2 separated from the Mars Express orbiter on 19 December 2003 and was due to land on the morning of 25 December after it plunged into the Martian atmosphere. Indeed, the last image of the plucky spacecraft was of it pulling away from Mars Express, but nothing was heard from the lander after its scheduled touchdown. It remained unclear whether Beagle 2's landing had been successful, and subsequent searches carried out by Mars Express and NASA's Mars Odyssey mission could not locate it.
First glance
Last year Michael Croon, a former member of the European Space Agency's Mars Express operations team in Germany, was examining images of the landing ellipse when he saw something that he believed was the lost craft. Further work by Mark Sims and colleagues at the University of Leicester in the UK and the team of the HiRISE instrument has now led the researchers to conclude that the images are indeed of the lost lander.
The team from the University of Leicester and NASA's Jet Propulsion Laboratory was very careful in its interpretation of the images – the researchers set several criteria, all of which were met, before they concluded that it was indeed Beagle 2 that they were seeing. These included a specific size, shape and location. The most crucial criterion was the spatial distribution of the various spacecraft components – the parachutes, the drogue, the heat shield and the lander itself – all of which had to be in the correct order and at about the predicted distances from each other.
Martian detectives
John Zarnecki of the Open University, who is also the principal investigator of the Huygens Titan probe that landed successfully 10 years ago this month, told physicsworld.com that the researchers involved in finding Beagle 2 "have done a fantastic bit of detective work. I think the evidence is absolutely compelling. And to have found it in the first place, among all those images when it is right at the limit of resolution, is a fabulous job."
From the images, the researchers have concluded that, at most, only three of the lander's four solar panels unfurled. This meant that Beagle 2's antenna was not exposed and could not receive commands or send back data. The team is still gathering more information to understand why this occurred, but an early hypothesis is that one of the airbags punctured on impact, meaning that the craft landed heavily and deformed the chassis, hence preventing proper opening of the solar panels.
Looking ahead
Asked at a press conference held by the UK Space Agency this morning whether he would design Beagle 2 again the same way, Sims said "no", adding that the team would make sure that the transmitter was on the outside and the deployment of the solar panels was not mission critical.
Beagle 2 was pioneered by Colin Pillinger of the Open University, who played a key role to publicize and finance the mission. Sadly, Pilinger died last year, as did two other main contributors – George Fraser of the University of Leicester and David Barnes of Aberystwyth University.
Zarnecki and his team contributed the Environmental Science Subsystem – a miniature but highly complex weather station weighing less than 100 gms – on Beagle 2. "I had always assumed that it burned up on impact," says Zarnecki, ruefully adding that "to think that it is sitting there 5 km from where it was supposed to land after a journey of millions of kilometres is incredibly frustrating." His sentiments echo those of Sims and the other researchers involved. The lessons learned from Beagle 2 will undoubtedly be used on the European Space Agency's upcoming ExoMars mission, which launches next year.
Quelle: pwc