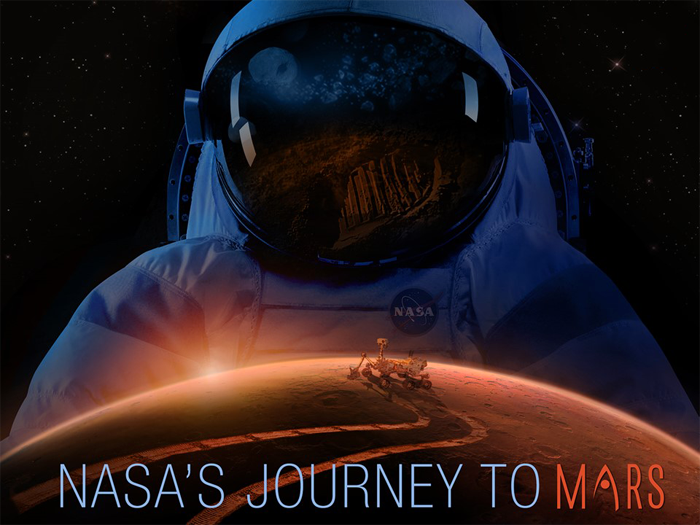 The first future human mission to Mars and those that follow will require the ingenuity and dedication of an entire generation. We take the next step on that journey with the uncrewed, first flight test of Orion.
Image Credit: NASA
-
In the not-too-distant future, astronauts destined to be the first people to walk on Mars will leave Earth aboard an Orion spacecraft. Carried aloft by the tremendous power of a Space Launch System rocket, our explorers will begin their Journey to Mars from NASA's Kennedy Space Center in Florida, carrying the spirit of humanity with them to the Red Planet.
The first future human mission to Mars and those that follow will require the ingenuity and dedication of an entire generation. It's a journey worth the risks. We take the next step on that journey this Thursday, Dec. 4, with the uncrewed, first flight test of Orion. (Follow along on the Orion Blog, or see the full schedule of events and launch viewing opportunities).
Orion is the first spacecraft built for astronauts destined for deep space since the storied Apollo missions of the 1960s and 70s. It is designed to go farther than humans have ever traveled, well beyond the moon, pushing the boundaries of spaceflight to new heights.
Orion will open the space between Earth and Mars for exploration by astronauts. This proving ground will be invaluable for testing capabilities future human Mars missions will need. The area around our moon, in particular, called cis-lunar space, is a rich environment for testing human exploration needs, like advanced spacewalking suits, navigating using gravity, and protecting astronauts from radiation and extreme temperatures.
One of Orion's early missions in the 2020s will send astronauts to explore an asteroid, which will be placed in a stable orbit around the moon using a robotic spacecraft. This Asteroid Redirect Mission will test new technologies, like Solar Electric Propulsion, which will help us send heavy cargo to Mars in advance of human missions. Astronauts aboard Orion will return to Earth with samples of the asteroid, having tested a number of collection tools and techniques we'll use in future human missions to Mars or its moons.
Astronauts will board Orion for a first crewed flight in 2021. Many of Orion's systems needed for that flight and others will be tested on Thursday with the first uncrewed flight test.
Orion’s flight test is designed to test many of the riskiest elements of leaving Earth and returning home in the spacecraft. It will evaluate several key separations events, including the jettison of the launch abort system that will be capable of carrying astronauts on future missions to safety if a problem were to arise on the launch pad or during ascent to space, and the separation of the Orion crew module from its service module ahead of its reentry though Earth’s atmosphere.
Orion’s heat shield also will be tested to examine how the spacecraft endures its high speed return from deep space. The heat shield will experience temperatures near 4,000 degrees Fahrenheit during Thursday’s test, and will come back at about 80 percent of the speed the spacecraft would endure returning from the vicinity of the moon.
Other elements will also be put to the test, including how Orion’s computers handle the radiation environment in the Van Allen Belt, the spacecraft’s attitude control and guidance and how its 11 parachutes slow the crew module to just about 20 mph ahead of its splashdown in the Pacific Ocean.
Teams also will evaluate the procedures and tools used to recover Orion from the ocean after it touches down about 600 miles southwest of San Diego and is transported back to shore.
Testing these capabilities now will help ensure that Orion will be the next generation spacecraft for missions in the 2020s that will put Mars within the reach of astronauts in the 2030s.
As development continues on Orion, astronauts aboard the International Space Station are helping us learn how to protect the human body for longer durations, which missions to Mars will require. Researchers operating increasingly advanced rovers and spacecraft on and around Mars are revealing the planet's history while characterizing its environment to better prepare for human explorers. Here on Earth, the U.S. spaceflight industry is building and testing next generation technologies NASA will need to send astronauts to Mars and return them safely.
Quelle: NASA
Raumfahrt
« Zum vorherigen Eintrag Zum nächsten Eintrag »
2805 Views
Created with page4