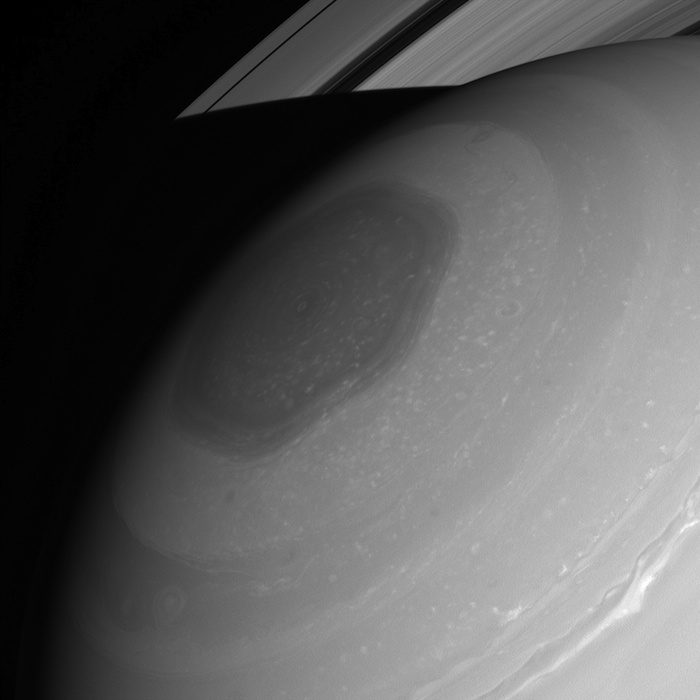 Nature is often more complex and wonderful than it first appears. For example, although it looks like a simple hexagon, this feature surrounding Saturn's north pole is really a manifestation of a meandering polar jet stream. Scientists are still working to understand more about its origin and behavior.
This view looks toward the sunlit side of the rings from about 33 degrees above the ringplane. The image was taken in red light with the Cassini spacecraft wide-angle camera on July 24, 2013.
The view was acquired at a distance of approximately 605,000 miles (973,000 kilometers) from Saturn and at a Sun-Saturn-spacecraft, or phase, angle of 19  degrees. Image scale is 36 miles (58 kilometers) per pixel. 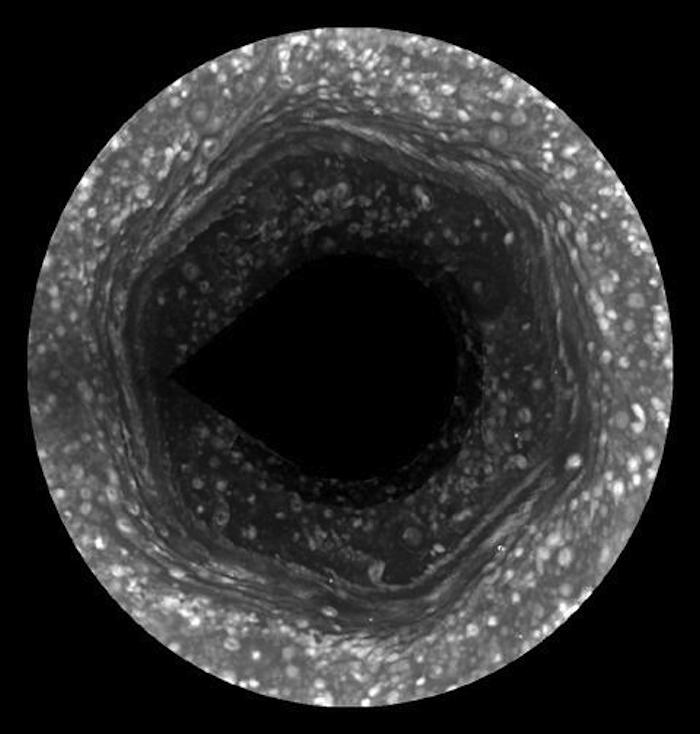 The hexagon was hidden in darkness during the winter of Saturn's long year, a year that is equal to about 29 Earth years. But as the planet approached its August 2009 equinox and signaled the start of northern spring, the hexagon was revealed to Cassini's cameras. This is the first time the whole hexagonal shape has been mapped out in visible light by Cassini, and these images show unprecedented details of Saturn's high northern latitudes. The hexagon was originally discovered in images taken by Voyager spacecraft in the early 1980s. Since 2006, the Cassini Visual and Infrared Mapping Spectrometer (VIMS) instrument has been observing the hexagon at infrared wavelengths, but at lower spatial resolution than these visible light images.
Three large mosaics were used to create this three-frame movie. The mosaics used dozens of images and the constituent images were projected into polar projections to provide a complete view of the hexagon. The mosaics used in this movie do not show the region directly around the north pole because it had not yet fully emerged from the polar winter night. Seams between the images are visible in the third frame of the movie because the observation geometry in those images made removal of the seams difficult.
The six-sided shape remains a mystery. Scientists think the hexagon is a meandering jet stream at 77 degrees north latitude, but they don't know what controls the path the stream takes. These images also show new phenomena for scientists to decipher, such as waves that can now be seen radiating from the corners of the hexagon where the jet takes its hardest turns. These images confirm the presence of a multi-walled structure in each of the hexagon's six sides, and the structure now can be seen extending to the top of Saturn's cloud layer. The images show that the inside of the hexagon is darker than the outside. The new images also show a large spot inside the hexagon that could be related to a dark spot seen inside the hexagon in 2006 in an image taken by Cassini's VIMS instrument. An earlier Voyager mosaic showed a large spot outside the hexagon. That spot existed at least until 1991 before disappearing into the long winter polar night.
Images from Voyager and from ground-based telescopes suffered from poor viewing perspectives. In late 2006, Cassini's VIMS camera imaged the region in the thermal infrared wavelength, showing the hexagon in false color (see PIA09188). Multiple images acquired by the VIMS instrument over a 12-day period showed that the feature is nearly stationary and is likely an unusually strong pole-encircling planetary wave that extends deep into the atmosphere. Scientists had speculated that a large vortex seen outside the hexagon during the Voyager observations exerted forces on the jet stream making it adopt a hexagonal pattern in a manner similar to how jet streams on Earth divert around high-pressure systems. However, in these new images, the vortex is notably absent while the hexagon persists almost 30 years after it was first seen.
The images were taken in visible light with the Cassini spacecraft wide-angle camera on Jan. 3, 2009. The images were obtained at a distance of approximately 764,000 kilometers (475,000 miles) from Saturn. The smallest resolved features at the latitude of the hexagon have a horizontal scale of approximately 100 kilometers.
The Cassini-Huygens mission is a cooperative project of NASA, the European Space Agency and the Italian Space Agency. The Jet Propulsion Laboratory, a division of the California Institute of Technology in Pasadena, manages the mission for NASA's Science Mission Directorate, Washington, D.C. The Cassini orbiter and its two onboard cameras were designed, developed and assembled at JPL. The imaging operations center is based at the Space Science Institute in Boulder, Colo.
Quelle: NASA
Astronomie
2741 Views
Created with page4