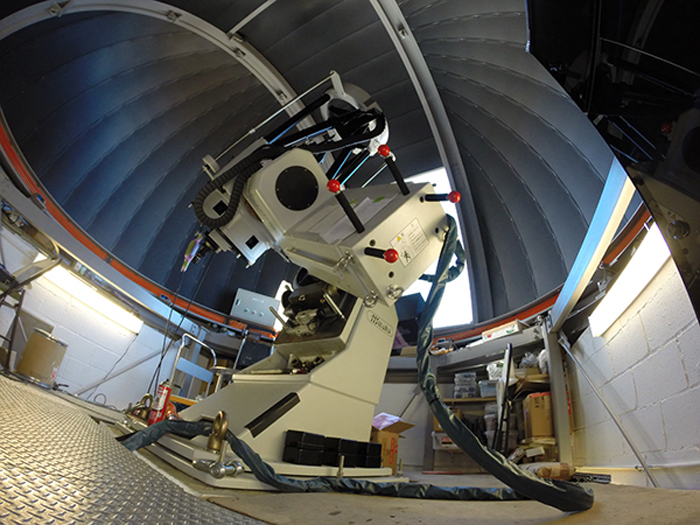 The T60 telescope looks out onto the daytime Haleakala sky after being relocated from its damaged building near Sendai, Japan. Credit: Dr. Isabelle Scholl

A Japanese planetary research observatory was blessed and dedicated today at Haleakala Observatories on the Hawaiian island of Maui in the presence of about 25 scientists and administrators from the United States and Japan.
The new observatory came about because Tohoku University’s Planetary Science Program requested assistance from the UH Institute for Astronomy after the 2011 earthquake damaged its observatory building near Sendai, Japan.
The IfA was able to provide an existing, but at the time unused, dome on Haleakala for the Tohoku 60-centimeter (24-inch) telescope known as “T60.” T60 will now gather data about Mars and planetary atmospheres from one of the best observing sites in the world.
Dr. Guenther Hasinger, director of the IfA, said, “We are excited to enhance an already strong collaboration with the Japanese astronomy community by helping to get their 60-centimeter planetary telescope back on the sky.”
Dr. Jeff Kuhn, an IfA Maui scientist, added, “Although this isn’t the largest telescope here, it brings unique instrumental capabilities to Hawaii.”
Dr. Takahiro Obara, director of the Tohoku Planetary Science Program, also attended the dedication. He noted, “We are extremely pleased to take this next step with our partners at the University of Hawaii. We expect that the many Japanese students and scientists that use this instrument will build an even stronger collaboration between the two institutions.”
Founded in 1967, the Institute for Astronomy at the University of Hawaii at Manoa conducts research into galaxies, cosmology, stars, planets, and the sun. Its faculty and staff are also involved in astronomy education, deep space missions, and in the development and management of the observatories on Haleakala and Maunakea. The Institute operates facilities on the islands of Oahu, Maui, and Hawaii.
Quelle: University of Hawai‘i
« Zum vorherigen Eintrag Zum nächsten Eintrag »
2809 Views
Created with page4