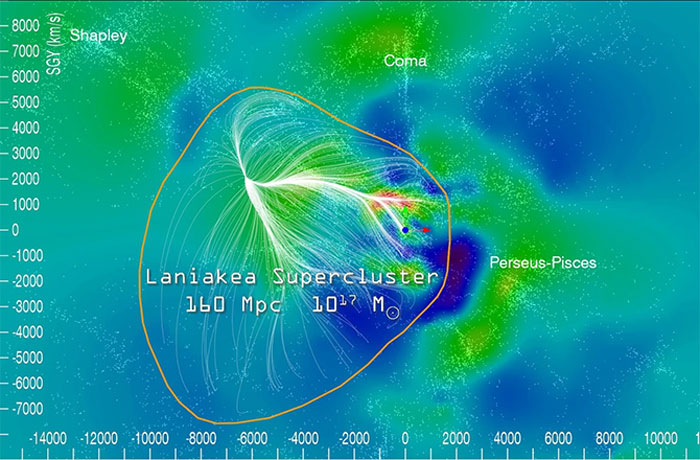 A slice of the Laniakea Supercluster in the supergalactic equatorial plane.

Using a new mapping technique that takes into account the motions -- and not just the distances -- of nearby galaxies, astronomers discovered that the Milky Way is located in the suburb of a massive, previously unknown super-cluster they named Laniakea, a term from Hawaiian words meaning “immeasurable heaven.”
Actually, Laniakea’s girth is measurable, though difficult to conceptualize. The super-cluster spans 520 million light-years in diameter, more than five times larger than the cluster previously believed to be the Milky Way’s cosmic home.
A light-year is the distance that light, moving at a speed of 186,000 miles per second, travels in one year. One light-year is about 5.88 trillion miles.
Astronomers were able to identify the boundaries of Laniakea by charting the flow of more than 8,000 galaxies surrounding the Milky Way. By that yardstick, they discovered that the Milky Way, along 100,000 other galaxies, is sailing toward a region named the Shapley super-cluster.
Other nearby galaxies are being gravitationally tugged in other directions. The new map of the local universe delineates the flow lines where the galaxies’ paths diverge, establishing for the first time regions of space under the influence of particular super-clusters.
In addition to Laniakea, the local universe includes galaxy complexes Shapley, Hercules, Coma and Perseus-Pieces.
“We don’t have the distance information to see the far sides of ... our (super-cluster) neighbors and we haven’t seen far enough to understand what’s causing this full motion of our galaxy,” astronomer and lead researcher Brent Tully, with the University of Hawaii, told Discovery News.
“That’s really the goal, to look out far enough -- probably three times farther than we are right now, probably requiring many thousands of more distance measurements, to map this larger region,” he said.
Astronomer Elmo Tempel, with Tartu Observatory in Estonia, said he was surprised that the Milky Way’s super-cluster wasn’t found sooner.
“Laniakea is the biggest structure in the local universe. Usually, the biggest structures are discovered first,” Tempel wrote in an email to Discovery News.
Tully and colleagues used recently published measurements of direct distances between galaxies, including for the first time galaxies that are farther away. That enabled them to calculate velocities at a bigger scale than previous studies.
“The discovery of Laniakea is definitely interesting and hopefully will initiate studies that will map the local universe in more detail,” Tempel wrote.
“Super-clusters and galaxy filaments are structures that are present in the distribution of galaxies. However, we do not know much about these structures and we do not know how these structures affect the formation and evolution of galaxies, including our Milky Way. This study will give us new perspective (on) how to analyze these problems in observations,” he wrote.
The research and a related commentary by Tempel appear in this week’s Nature.
Quelle: D-News
.
Add a Line to Our Galactic Address: Laniakea Supercluster
There are lots of lines in our planet's cosmic address: Earth, the solar system, the Milky Way galaxy, the Local Group of galaxies, and the Virgo Cluster of galaxy groups. Now astronomers are adding another one: the Laniakea Supercluster, which takes its name from the Hawaiian term for "immense heaven."
Laniakea's outlines and boundaries are laid out for the first time in this week's issue of Nature. Our Milky Way lies on the outskirts of the supercluster, which spans 500 million light-years and contains the mass of 100 quadrillion suns in 100,000 galaxies.
"We have finally established the countours that define the supercluster of galaxies we can call home," lead researcher R. Brent Tully, an astronomer at the University of Hawaii at Manoa, said in a news release. "This is not unlike finding out for the first time that your hometown is actually part of a much larger country that borders other nations."
Superclusters rank among the largest structures in the interconnected web of galaxy clusters that account for much of the matter in the universe. Tully and his colleagues say the extent of superclusters should be defined by their gravitational spheres of influence — and they used the Green Bank Telescope and other radio telescopes to map out the motions of galaxies within our sphere of influence.
Quelle: NBC
.

University of Hawaiʻi at Mānoa astronomer R. Brent Tully, who recently shared the 2014 Gruber Cosmology Prize and the 2014 Victor Ambartsumian International Prize, has led an international team of astronomers in defining the contours of the immense supercluster of galaxies containing our own Milky Way. They have named the supercluster “Laniakea,” meaning “immense heaven” in Hawaiian. The paper explaining this work is the cover story of the September 4 issue of the prestigious journal Nature.
Galaxies are not distributed randomly throughout the universe. Instead, they are found in groups, like our own Local Group, that contain dozens of galaxies, and in massive clusters containing hundreds of galaxies, all interconnected in a web of filaments in which galaxies are strung like pearls. Where these filaments intersect, we find huge structures, called “superclusters.” These structures are interconnected, but they have poorly defined boundaries.
The researchers are proposing a new way to evaluate these large-scale structures by examining their impact on the motions of galaxies. A galaxy between two such structures will be caught in a gravitational tug-of-war in which the balance of the gravitational forces from the surrounding large-scale structures determines the galaxy’s motion. By mapping the velocities of galaxies throughout our local  universe, the team was able to define the region of space where each supercluster dominates.
The Milky Way resides in the outskirts of one such supercluster, whose extent has for the first time been carefully mapped using these new techniques. This Laniakea Supercluster is 500 million light-years in diameter and contains the mass of 1017 (a hundred quadrillion) suns in 100,000 galaxies.
This study clarifies the role of the Great Attractor, a problem that has kept astronomers busy for 30 years. Within the volume of the Laniakea Supercluster, motions are directed inwards, as water streams follow descending paths toward a valley. The Great Attractor region is a large flat bottom gravitational valley with a sphere of attraction that extends across the Laniakea Supercluster.
The name Laniakea was suggested by Nawa‘a Napoleon, an associate professor of Hawaiian Language and chair of the Department of Languages, Linguistics, and Literature at Kapiʻolani Community College, a part of the University of Hawaiʻi system.
The name honors Polynesian navigators who used knowledge of the heavens to voyage across the immensity of the Pacific Ocean.
The other  authors are Hélène Courtois (University Claude Bernard Lyon 1, Lyon, France), Yehuda Hoffman (Racah Institute of Physics, Hebrew University, Jerusalem), and Daniel Pomarède (Institute of Research on Fundamental Laws of the Universe, CEA/Saclay, France).
A short video about Laniakea that gives the viewer a general sense of the structure of our home supercluster and of galaxy motions in the nearby universe is available at http://vimeo.com/104704518. A longer video that complements the Nature paper may be found at http://irfu.cea.fr/laniakea.
Quelle: University of Hawaiʻi at Mānoa