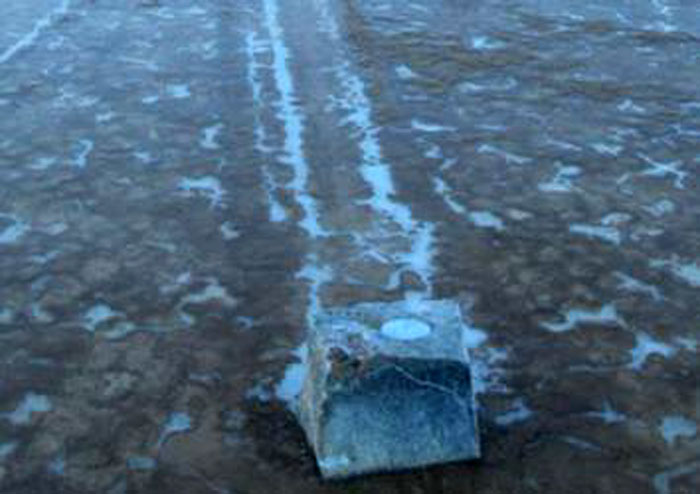 Oh how I love nature and science! The former sets up mysteries that baffle us, and then the latter equips us with tools with which to solve them.
When I was a kid, one of the coolest mysteries going was the moving stones of Racetrack Playa. This is a dry lake bed in Death Valley, California, where large rocks are embedded in the dried mud. However, many of the rocks have clearly been moving; there are long tracks behind them the caked, baked mud pushed up like rails along the tracks’ sides.
What could be moving these stones? No one knew. They would sit for years, then suddenly be found to have moved many meters. Could wind push them? Maybe ice formed after rain, forming rafts that floated the rocks up. Speculation abounded, and I remember watching TV shows about the rocks, and reading about them in sketchy “Mysteries of the Paranormal” type books when I was a wee lad.
Now, however, this enduring mystery has been solved. And I mean, solved. Like, we know what’s causing this. A team of scientists and engineers were able to capture the motion on camera, finally revealing the mechanism behind this bizarre behavior.
It was wind. And rain, and ice. But not quite the way it was thought before. Here’s a video describing it, from one of the scientists, Scripps paleooceanographer Richard Norris:
.

Hier: https://www.youtube.com/watch?v=fGTDMhZgvQE#t=15
.
In a nutshell, the playa is very dry, getting only a few centimeters of rain per year. In the winter, when it does rain, the slightly tilted playa gets accumulations of water a few centimeters thick at one end. It gets cold enough for the water to freeze on top. When the Sun comes out, the ice begins to melt, forming large chunks called rafts. The wind blows these rafts (which are typically a few millimeters thick), which then hit the rocks and push on them. The ground is softened by the water, so the rocks can move more easily... and then they do.
The team set up a weather station, time-lapse cameras, and 15 rocks with GPS units embedded in them.  With this equipment, they were able to capture and record the motion. The rocks move at slow speeds, perhaps a few meters per minute, but that was enough to get caught on camera. Here’s one (indicated by the red arrow; in the background are two stationary rocks indicated by blue arrows) in action:
.

The movement of one of the Racterack Playa rocks over the course of about 14 seconds. The lighter rippled material is open water; the darker smooth pathces are ice.
.
This also explains why sometimes several rocks show not only parallel trails, but also apparent simultaneous changes in direction; the sheets of ice were blown by the wind, and when the wind blew from a different direction, the ice sheets responded.
Wind alone couldn’t do it, and the ice wasn’t acting as a buoyancy agent, either. It was basically sheer muscle power, surprisingly, given how fragile you might think that ice was. I think that’s one of the reasons no one seriously considered this as an explanation before.
. 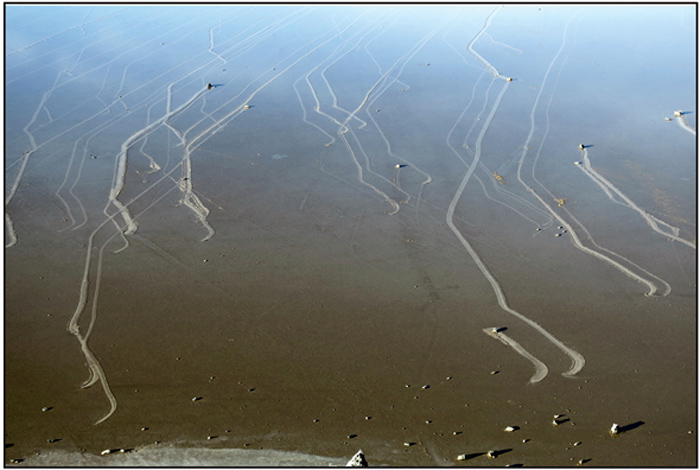 Tracks left by multiple rock are parallelapparently making the same angled turns at the same time.
.
I love this. It makes me ridiculously happy to see this. There’s so much wonderfulness to it! A mystery that’s lasted for decades, no explanations that ever seemed to completely work, then a devoted and dedicated effort was mounted… as had previous ones, but this one got a big stroke of luck, catching this movement on several occasions when the events might not happen for a decade at a time.
At this point I have to disagree with my friend Zach Weiner, who put together a compilation of his Saturday Morning Breakfast Cereal comics into a book called Science: Ruining Everything Since 1543.
Science! It doesn’t ruin anything*. It reveals the amazing, subtle, wondrous, and simply cool mechanisms that make the natural world what it is: endlessly fun.
* At least, nothing that doesn’t deserve to be ruined. Also: I’m in that book, and you should buy multiple copies, because in the end I still think Zach’s the bee’s knees.
Quelle: BAD ASTRONOMY
« Zum vorherigen Eintrag Zum nächsten Eintrag »
3939 Views
Created with page4