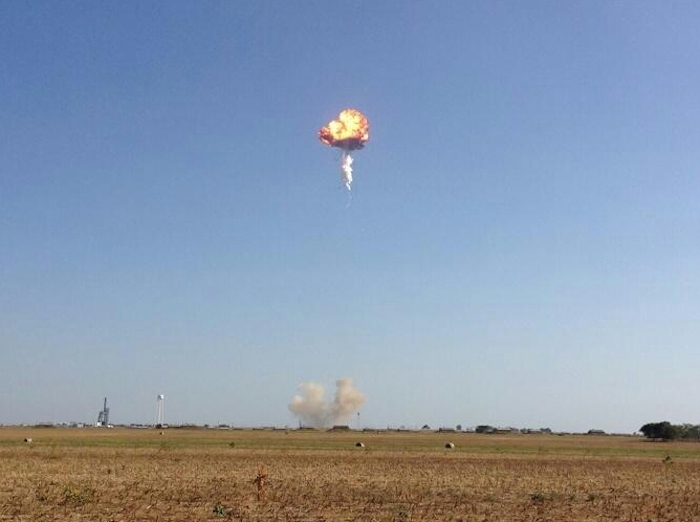 A SpaceX F9R PROTOTYPE rocket exploded during a flight test in the skies over Texas on Friday, August 22 when an anomaly was detected in-flight. Photo CREDIT: Amanda Spence

By definition, flight tests are expected to validate a vehicle’s ability to fly as designed and reveal any issues, whether good or bad, as doing so provides the data needed to support further development of a safe and effective flight system, and Friday afternoon spectators in Texas were present to witness one such example when the company’s prototype Falcon-9 Reusable Development Vehicle (F9R Dev for short) exploded in-flight.
The flight test was the latest in a series of launches over the last couple years carried out by the Hawthorne, Calif – based company at their 900-acre McGregor, Texas rocket development test site. SpaceX founder & CEO Elon Musk sells his rocket company’s launch services on its affordability, a fact that is heavily dependent on the future reusability of the Falcon-9 launch system. If SpaceX wants to provide the market with a truly reusable, and consequently much cheaper rocket, then the company needs to design and develop it all from the ground up. SpaceX isn’t just focused on F9′s reusability either, they want to go a big step further and return their rockets to the launch site under the vehicle’s own power minutes after liftoff, which would (in theory) allow for a rapid turnaround between FLIGHTS.
“With RESEARCH and development projects, detecting vehicle anomalies during the testing is the purpose of the program,” said SpaceX in a statement released Friday evening. “Today’s test was particularly complex, pushing the limits of the vehicle further than any previous test. As is our practice, the company will be reviewing the flight record details to learn more about the performance of the vehicle prior to our next test.”
Quelle: AS
« Zum vorherigen Eintrag Zum nächsten Eintrag »
2910 Views
Created with page4