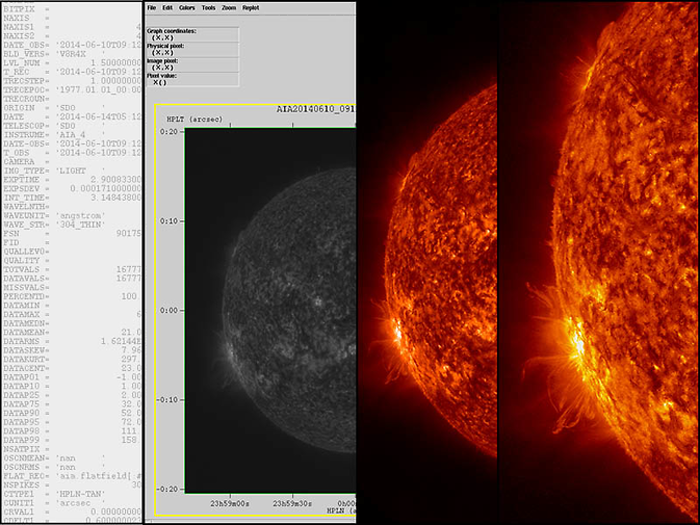 Spacecraft record solar activity as a binary code, 1s and 0s, which computer programs can translate into black and white. Scientists colorize the images for realism, and then zoom in on areas of interest.

You cannot look at the sun without special filters, and the naked eye cannot perceive certain wavelengths of sunlight. Solar physicists must consequently rely on spacecraft that can observe this invisible light before the atmosphere absorbs it.
“Certain wavelengths either do not make it through Earth’s atmosphere or cannot be seen by our eyes, so we cannot use normal optical telescopes to look at the spectrum,” said Dean Pesnell, the project scientist for the Solar Dynamics Observatory, or SDO, at NASA’s Goddard Space Flight Center in Greenbelt, Maryland.
Several spacecraft can observe these invisible light wavelengths. SDO for example has four telescopes that image the sun in the ultraviolet spectrum. As beams of ultraviolet light pass into the telescope, a mirror with special coatings filters and amplifies the ultraviolet light’s otherwise poor reflection. The incoming photons are then recorded as pixels and converted into electrical signals, similar to how your cell phone camera sees visible light.
“It’s exactly the same process, whether it’s ultraviolet light, infrared light, visible light, or radio,” said Joseph Gurman, project scientist for both the Solar and Heliospheric Observatory and the Solar Terrestrial Relations Observatory at Goddard. “In this case we’re trying to understand how the sun changes and how those changes affect life here on Earth.”
Ultraviolet light causes molecular radiation damage to our skin, seen as sunburns that can lead to cancer. Its cousin, extreme ultraviolet radiation, and the associated solar storms have the potential to disrupt communications and spacecraft navigation. “These are very damaging, energetic photons, and we want to understand what chain of events produces these photons,” Pesnell said.
Thankfully our planet’s atmosphere absorbs much of this solar radiation, making life on Earth possible. However, this means that to study extreme ultraviolet light, instruments must do it from the vacuum of space.
“Ultraviolet light from the sun can show us the origins of solar storms that can lead to power outages, cell phone disruptions, and delays in shipping packages due to the rerouting of planes from over the pole,” Gurman said.
By understanding what occurs in the sun’s atmosphere, scientists hope to predict when powerful solar events such as coronal mass ejections and solar flares may occur.
“You really want to know what’s happening on the sun as soon as you can,” said Jack Ireland, a solar visualization specialist at Goddard. “We can then use computer models to estimate how solar events will affect Earth’s space environment.”
The information can then be used by NOAA’s Space Weather Prediction Center, in Boulder, Co. to alert power companies and airlines to take the necessary precautions, thus avoiding power outages and keeping airplane passengers safe.
. 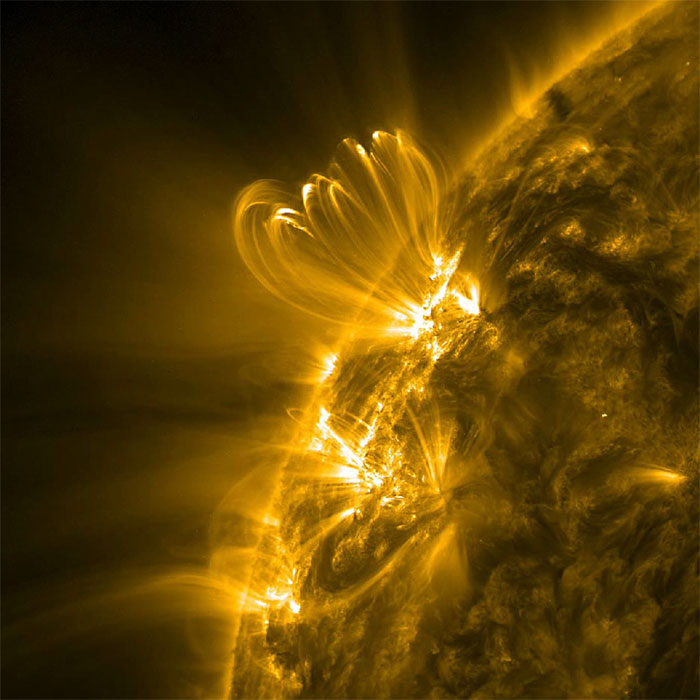 Four of the telescopes on the Solar Dynamics Observatory observe extreme ultraviolet light activity on the sun that is invisible to the naked eye.
. 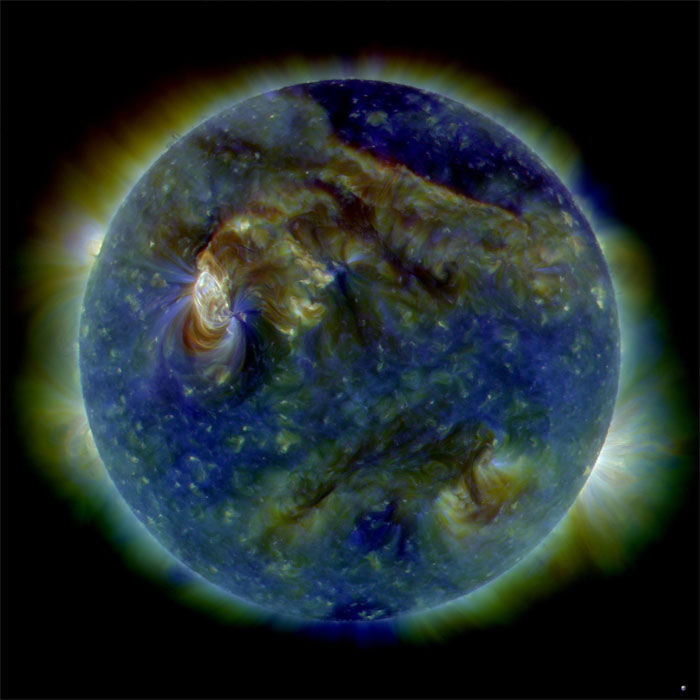