New Rochelle, August 19, 2014—A new ovoid structure discovered in the Nakhla Martian meteorite is made of nanocrystalline iron-rich clay, contains a variety of minerals, and shows evidence of undergoing a past shock event from impact, with resulting melting of the permafrost and mixing of surface and subsurface fluids. Based on the results of a broad range of analytical studies to determine the origin of this new structure, scientists present the competing hypotheses for how this ovoid formed, point to the most likely conclusion, and discuss how these findings impact the field of astrobiology in a fascinating article published in Astrobiology, a peer-reviewed journal from Mary Ann Liebert, Inc., publishers. The article is available Open Access on the Astrobiology website.
In the article, "A Conspicuous Clay Ovoid in Nakhla: Evidence for Subsurface Hydrothermal Alteration on Mars with Implications for Astrobiology," Elias Chatzitheodoridis, National Technical University of Athens, Greece, and Sarah Haigh and Ian Lyon, the University of Manchester, UK, describe the use of tools including electron microscopy, x-ray, and spectroscopy to analyze the ovoid structure. While the authors do not believe the formation of this structure involved biological materials, that is a possible hypothesis, and they note that evidence exists supporting the presence of niche environments in the Martian subsurface that could support life.
"This study illustrates the importance of correlating different types of datasets when attempting to discern whether something in rock is a biosignature indicative of life," says Sherry L. Cady, PhD, Editor-in-Chief of Astrobiology and Chief Scientist at the Pacific Northwest National Laboratory. "Though the authors couldn't prove definitively that the object of focus was evidence of life, their research strategy revealed a significant amount of information about the potential for life to inhabit the subsurface of Mars."
. 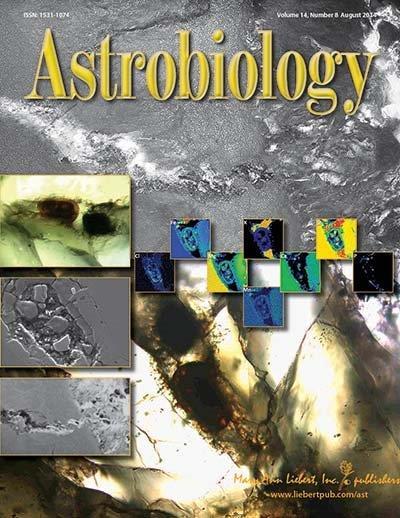