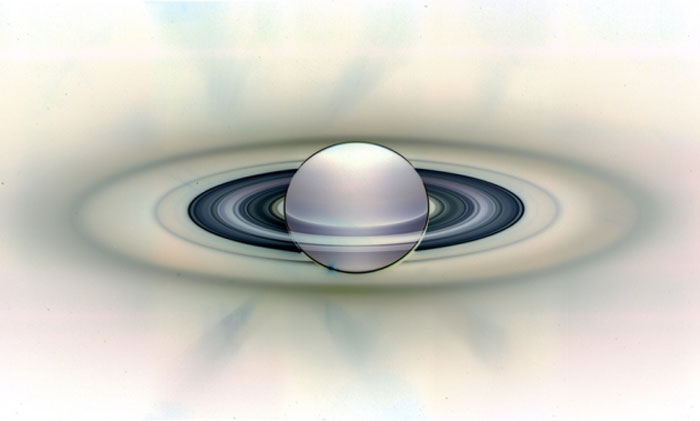 Saturn’s spectacular ring system may date back some 4.4 billion years to the time when the planet itself formed, new findings suggest. The work could help to resolve a long-running debate about whether the rings are ancient or formed much more recently, on the order of hundreds of millions of years ago.

For the first time, NASA's Cassini spacecraft has measured the rate at which dust from outside the Saturn system is falling on the rings and polluting them. That rate turns out to be about 40 times lower than previously thought, which eliminates a major argument against the ‘old rings’ theory: that if the rings had been around for billions of years, they should have gotten coated with a dark spray of other particles and look a lot dirtier than they do.
"The rings can be three to ten times older than we used to think," says Larry Esposito, a planetary scientist at the University of Colorado Boulder.
Rare dusting
Cassini has been orbiting Saturn since 2004, but only now has its cosmic-dust instrument managed to gather enough examples of dust particles that have entered the Saturn system and fallen on its rings. Sascha Kempf, a space physicist also at the University of Colorado, presented the latest (and long-anticipated) data during a workshop at the university on 15 August.
Over the course of seven years, Kempf and his colleagues detected just 140 particles whose trajectories show that they must have come from elsewhere in the Solar System, and which were large enough to have dirtied the rings.
Researchers had expected to see a lot more than just 20 of these particles per year, but that is because they were estimating dust flux using data from the inner Solar System, Kempf says. The Cassini data show that there is a lot less dust out by Saturn, and the particles all seem to come from the distant region of space known as the Kuiper belt, where icy bodies such as Pluto exist. “We’re seeing very, very different stuff,” Kempf says.
The lower rate of particle flux suggests that Saturn’s rings could be ancient after all. “If the pollution problem is not as severe, then the rings could last a lot longer before they turn black,” says Phillip Nicholson, a planetary scientist at Cornell University in Ithaca, New York.
There are still other arguments for why Saturn’s rings could be young, such as the possibility that the rings formed later from the remains of moons that were gravitationally ripped apart. “But I’m more inclined to believe the old-rings model now than before,” says Jeff Cuzzi, a planetary scientist at NASA’s Ames Research Center in Moffett Field, California.
Other factors might also have reshaped the ring system over time. Cuzzi notes that there could have been more dust in the early days of the Solar System than there is today. The rings might also undergo some kind of constant recycling that keeps them looking relatively fresh, says Esposito.
Cassini mission planners have still not heard the results of a NASA ‘senior review’ that will determine funding for planetary missions beyond September. But they are expecting to fly the craft until 2017, when Cassini will perform a series of spectacular loops between the ring system and the planet itself. In its final months, the spacecraft will measure the mass of the rings directly for the first time, before plunging into Saturn’s atmosphere in a grand finale.
Quelle: nature
« Zum vorherigen Eintrag Zum nächsten Eintrag »
3000 Views
Created with page4