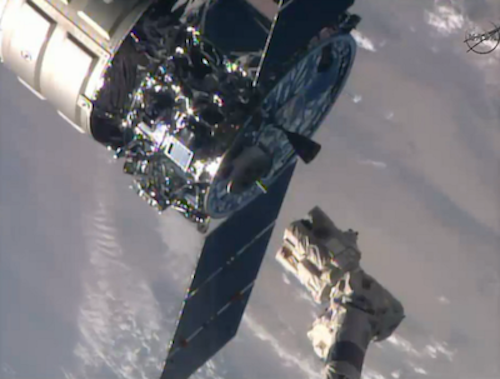 Closing out a one-month stay at the International Space Station, a commercial Cygnus supply ship owned and operated by Orbital Sciences Corp. departed the huge orbiting complex Friday.
The Cygnus spacecraft just after release from the space station's Canadian-built robot arm Friday. Photo CREDIT: NASA TV
The Cygnus spacecraft is scheduled to re-enter Earth's atmosphere over the uninhabited South Pacific Ocean on Sunday. The cargo ship is designed to disintegrate and burn up during re-entry, disposing of unneeded items and trash stowed inside by the space station's astronauts.
Under the control of engineers on the ground, the space station's 58-foot-long robotic arm pulled the Cygnus spacecraft away from a berthing port on the outpost's Harmony module at 5:14 a.m. EDT (0914 GMT), then maneuvered the spaceship to a release point about 30 feet below the complex.
European Space Agency astronaut Alexander Gerst, assisted by NASA FLIGHT engineer Reid Wiseman, took control of the robot arm and commanded it to release the Cygnus spacecraft at 6:40 a.m. EDT (1040 GMT).
Moments later, astronauts inside the space station sent commands for the Cygnus spacecraft to fire thrusters and fly away from the complex. It cleared the space station's "keep out" sphere, an imaginary safety zone around the outpost, a few minutes after separating from the robot arm.
The departure of the Cygnus spacecraft ends the second flight of the expendable Orbital-built freighter to the space station. The mission, known as Orb-2, launched July 13 aboard an Antares rocket from Wallops Island, Va.
Loaded with nearly 3,300 pounds of equipment, experiments and food, the spaceship completed a rendezvous with the space station July 16, when it was captured by the robot arm.
The mission is part of a $1.9 billion deal between NASA and Orbital for at least eight cargo deliveries through 2016.
Now filled with trash, the spacecraft will fly a safe distance from the space station before a pair of braking burns to guide it into a re-entry zone between New Zealand and South America.
Re-entry is scheduled for around 9:11 a.m. EDT (1311 GMT) Sunday.
The re-entry is timed to allow the crew on the space station to observe the spacecraft's fiery fall from space.
The crew's observations of Sunday's Cygnus re-entry is an exercise to prepare for the demise of Europe's ATV early next year.
Officials are considering putting the ATV on a trajectory for a "shallow" re-entry when it plunges back to into the atmosphere at the end of its mission.
Instead of lowering the craft's orbit to intersect the Earth's surface, controllers would put the low point of the ATV's orbit in the upper atmosphere, making for a slower warm-up and disintegration of the spacecraft. The shallow re-entry would also SPREAD debris along a longer footprint.
The experiment would help NASA and its PARTNERSprepare for the disposal of the International Space Station at the end of its mission. A controlled re-entry of such a large vehicle -- roughly the size of a football field and weighing nearly a million pounds -- has never been attempted before.
The release and re-entry of Cygnus comes during a busy week for the space station's six-man crew. A European AUTOMATED Transfer Vehicle cargo craft docked to the lab's Russian service module Tuesday, and two Russian cosmonauts are gearing up for a spacewalk Monday.
The spacewalk's agenda includes the deployment of a small Peruvian satellite and the retrieval and installation of science experiments outside the Russian section of the space station.
Quelle: SN
.
U.S. Commercial Cargo Ship Delivery Mission Ends as Canadarm2 Releases Cygnus
. 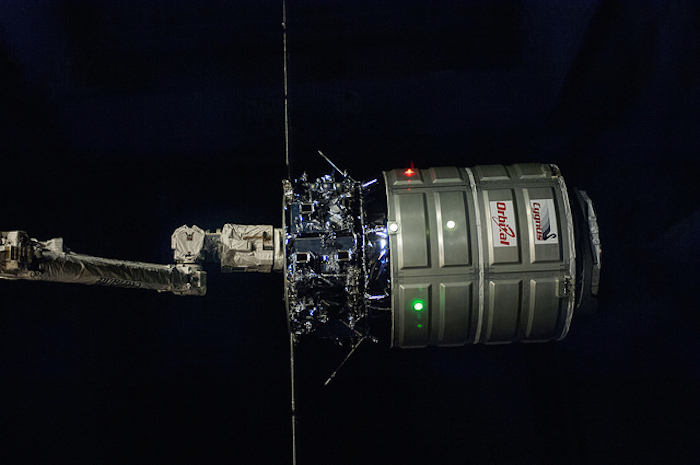 The Cygnus is in the grips of Canadarm2 moments before being released in Feb. 18, 2014 during Expedition 38.
.
Orbital Sciences Cygnus commercial cargo craft completed a month-long delivery mission to the International Space Station Friday when it was released from the grips of the Canadarm2 robotic arm at 6:40 a.m. EDT. Cygnus is now orbiting on its own, separating from the station and heading for a deorbit and a fiery entry over the Pacific Ocean on Sunday.
Expedition 40 Flight Engineers Alexander Gerst and Reid Wiseman were inside the cupola remotely controlling the 58-foot Canadian robotic arm from the robotics workstation. Gerst, who was backed up by Wiseman, was in charge of releasing the resupply vehicle after ground controllers at Mission Control, Houston remotely maneuvered it into the release position following its unberthing from the Earth-facing port of the Harmony module.
Filled with trash, Cygnus completed its second commercial resupply mission for NASA. Orbital Sciences launched their spacecraft July 13 atop an Antares rocket from the Mid-Atlantic Regional Spaceport at the Wallops Flight Facility, Virginia on a three-day journey to the orbital laboratory. A total of eight missions will be flown by Cygnus to the station through 2016.
Cygnus delivered nearly 3,300 pounds of science, supplies and spacewalking gear when it was captured and berthed to Harmony July 16. Aboard the spacecraft were items such as food, life support equipment, thermal control hardware and photography and video gear.
Experiment hardware was also on the Cygnus manifest ensuring the continuous international research aboard the orbital laboratory.
A flock of nanosatellites was also shipped to the station aboard Cygnus for future release from the Kibo laboratory module’s airlock beginning next week. Individually known as “Dove” satellites, the group will collect continuous Earth imagery documenting natural and man-made conditions of the environment to improve disaster relief and increase agricultural yields.
Hardware upgrades were brought up to the station on the ship for a trio of tiny satellites that float inside the station known as SPHERES (Synchronized Position Hold, Engage, Reorient, Experimental Satellites). Gear enabling studies for educators, students and private researchers was also delivered for the NanoRacks program in a partnership with NASA under the Space Act Agreement.
The Expedition 40 crewmembers hope to document Cygnus’ reentry Sunday as part of an engineering exercise to study the mechanics of the breakup of a space vehicle. Cygnus is scheduled to deorbit Sunday around 8:30 a.m. EDT.
With the Cygnus private cargo carrier orbiting a safe distance from the station the crew is conducting science and maintenance and focusing its attention on a Russian spacewalk Monday morning.
After completing the robotics work to release Cygnus, European astronaut Alexander Gerst switched gears and spent a couple of hours on plumbing work. He replaced a pre-treat tank and hose in the Tranquility node’s Waste and Hygiene compartment.
Meanwhile, Commander Steve Swanson and Flight Engineer Reid Wiseman participated in the SPHERES-Zero-Robotics student competition. Middle school students compete to write the best algorithm to maneuver bowling ball-sized internal satellites through various tasks inside the space station.
The station’s cosmonauts had an off-duty day in the Russian segment of the orbital laboratory while still performing some tasks. The trio conducted light housekeeping work, health and science checks and minor preparations for the upcoming spacewalk.
Flight Engineers Alexander Skvortsov and Oleg Artemyev plan to exit the Pirs docking compartment at 10 am Monday to deploy a Peruvian CubeSat, retrieve old experiments and install new ones, among other external tasks.
In the meantime, Skvortsov conducted a hearing assessment. Artemyev checked in with spacewalk specialists on the ground for a tag up. And Flight Engineer Max Suraev photographed the condition of air ducts in the Zvezda service module.
Quelle: NASA
.
Update: 17.08.2014
.
Re-Entry beobachtet aus der ISS 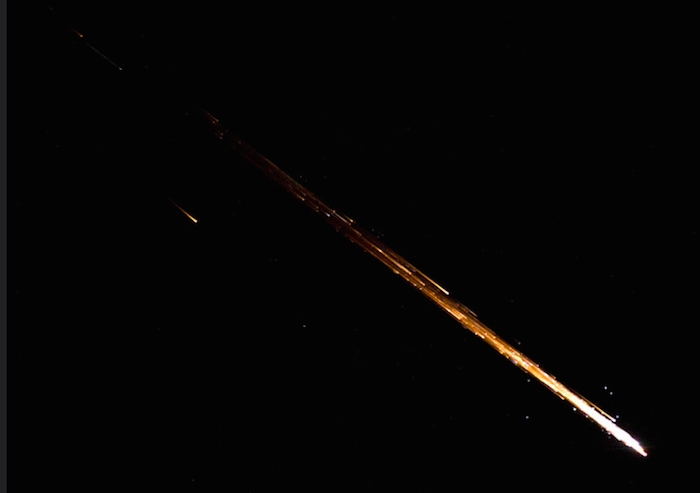 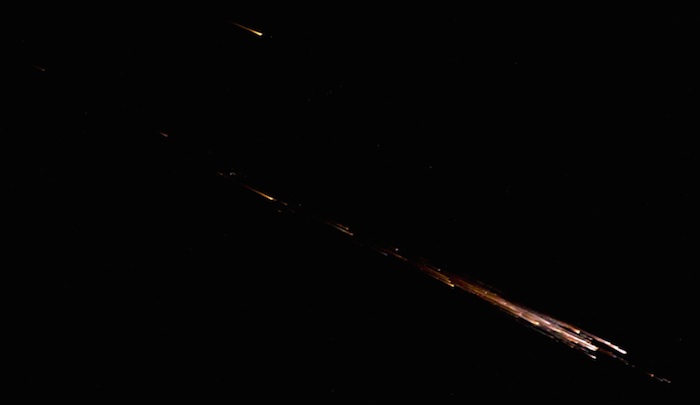