The 701 Club
Case 6507 September 13, 1959 Bunker Hill AFB, Indiana
Berlinner’s listing states the following:
Sept. 13, 1959; Bunker Hill AFB, Indiana. 4 p.m. Witnesses: at least two control tower operators and the pilot of a Mooney private air- plane. One pear-shaped object, colored white, cream, and metallic, with a trail under it. Object showed little movement during 3 hours. Attempted intercept by USAF T-33 jet trainer failed.1
The blue book record card summarizes the object as such:
Pear shaped obj size of a dime and orange, colors varied fm white, cream, & metallic. Obj had something trailing beneath it. Ghe (sic) general opinion was that the obj moved fm N to SW rising slightly. Obj was seen until dusk, at which time it became indistinguishable.
Blue book also lists the duration of the sighting as lasting over nine hours.
Details
The blue book case file is limited in details but it does provide us with some information:
1. It was first reported by a civilian pilot , who was heading towards La Porte, Indiana from Kokomo. He saw the object north of Bunker Hill AFB.
2. Bunker Hill AFB personnel in the tower saw the object at a bearing of 340 degrees at an angle of between 35-55 degrees.
3. The elevation angle remained the same (slightly increasing) as the object headed towards the southwest. It disappeared at dusk.
4. The object was first seen by base personnel at 1800-1900Z (1300-1400EST).
5. There were observations from off base as early as 1500Z (1000 EST) from Burrows, Kokomo, and Logansport, Indiana.
6. An AT-33 that was airborne was asked to investigate. The pilot flew to 37,000 feet but could not reach the object’s altitude.
Blue Book Investigation
The investigation seems to have been inadequate. It was suspected that the object was a high altitude balloon and Blue Book contacted Lowry AFB to see if they had knowledge of any balloon launches on that date. They did not have any records of bal- loons being launched on the 13th but they did discover that General Mills, in Minnesota, had launched balloons on the 11th and 14th. The investigating officer, Captain Van Dyke, was quoted as stating, “It is my opinion after careful study and analysis that this UFO was a balloon type unknown..”3
With so many clues that this was a high altitude balloon, one would think that the case would have been identified as a probable balloon. According to popular UFO lore, Blue Book rubber stamped just about any UFO case they could with just about any explana- tion. For some reason, they chose not to do so in this case and allowed it the privilege of appearing in the unidentifieds list. The record card simply states:
Possibly Raven ind or Goodyear or other research organization balloon. However, since there is no confirmation this sighting is classified as “unidentified”. 4
Balloon activity
Asearch of the newspaper archive revealed that there was some significant balloon activity in that region of the country during this time period. In addition to the balloon launches on the 11th and 14th of September, there were also several balloons ob- served, tracked, or recovered elsewhere.
1. The September 14th edition of the Ironwood daily globe (Michigan) stated that a large balloon was seen floating over the re- gion for several hours on Sunday (September 13th) afternoon.5
2. The September 15th edition of the Beckley Post Herald (West Virginia) reported that a “new type weather balloon” that was “designed to reach an altitude of 200,000 feet” had landed Sunday night in Lincoln county (Southwestern West Virginia).6 The September 14th edition of the Charleston Daily Mail stated that the search was initiated by the Civil Air Patrol because residents saw it come down that night.7
3. The September 15th edition of the Harlan news-advertiser (Iowa) had a photograph of a helicopter that had landed at the local airport“lastweek”.Itwasoneoftwohelicoptersthatwerepursuingaresearchballoon. Thismayhavebeenaballoonlaunched as part of project ASH CAN from Sioux City, Iowa.8
4. The September 15th edition of the Mansfield News-Journal describes a mass sighting of a UFO on the evening of the 14th. This was identified as a plastic research balloon. This might have been the balloon launched from St. Paul on the 14th or, possibly, the 11th. 9
5. The September 12th edition of the Stevens Point Daily Journal (Steven’s Point Wisconsin) stated a “weather balloon” had been observed north of the city on the 11th of September and that the following morning it was visible southeast of the city. The Wisconsin Rapids paper nearby also would mention the balloon. The manager of the local airport thought the altitude was 8,000 feet but it could have been much higher. Steven’s point was about 200 miles east of St. Paul. This was probably the 11th of September balloon that had been launched from Fleming field.10 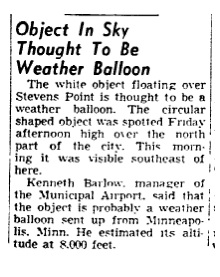 There seems to have been balloon activity of some kind that may or may not be related. Both Sioux City and St. Paul launched balloons on the 11th. The stratocat database has no information on what happened to these balloons and I could not easily find any documents mentioning these flights. The Ironwood sighting is intriguing because it was made about the same time as this Bunker Hill AFB sighting. They could not have been the same balloon because they were about 500 miles apart. We have no idea where that balloon came from either.
. 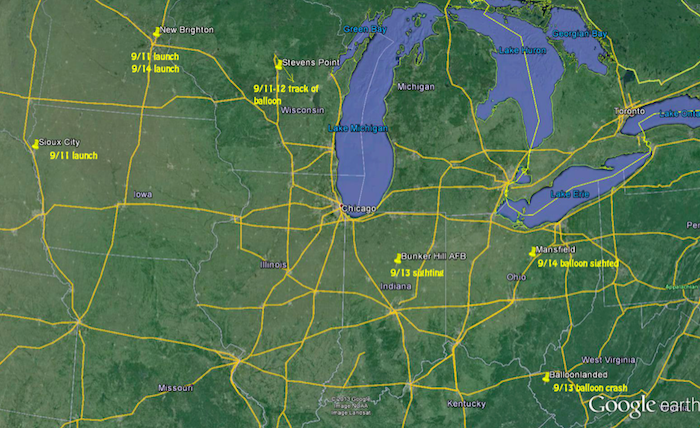 A potential source is that the balloon seen in Indiana was the one launched on September 11th from Minnesota. The Stevens Point journal had stated that they had a balloon pass over the city on the night of the 11th/12th and it was still airborne southeast of the city the morning of the 12th indicating a southerly trajectory. A little over 300 miles to the southeast of Stevens point was Bunker Hill AFB. In the map above, I put some of the pertinent information from the news paper reports coupled with the Blue Book file reports. It presents a potential scenario that the high altitude balloon seen in Wisconsin on the 11th and 12th was probably the same balloon that caused the sighting in Indiana on the 13th. It then may have descended and high speed winds in the upper troposphere took it to a crash point in West Virginia 300 miles away or it could have shifted eastward and appeared in Ohio the fol- lowing evening. While this does not prove anything, it is suggestive of where the balloon originated.
Solved?
As noted in the Blue Book record card, one can not call this “solved” without a positive identification. However, one can not really list this as “unidentified”. There is enough information in the file to conclude that it is likely this was a high altitude research bal- loon. I would reclassify this as possibly/probably a research balloon.
Quelle: SUNlite 6/2013
  
UFO-Forschung
2931 Views
Created with page4