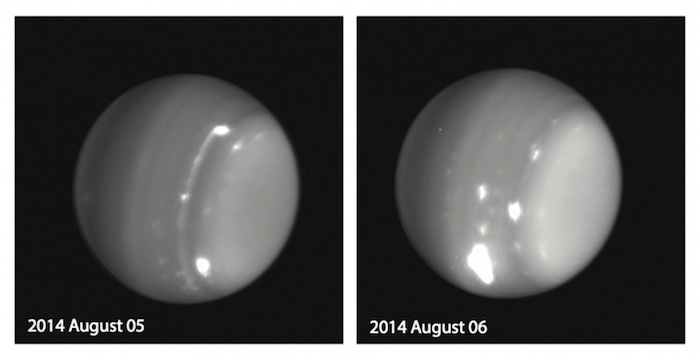 A telescope on Earth has spotted huge storms brewing on the planet Uranus.
Scientists using the Keck Observatory in Hawaii have recently seen a number of storms develop on the planet. One image, taken on Aug. 5, shows a few bright spots in infrared photos taken of the planet. The bright bits show storms in the planet's atmosphere. A second photo of Uranus, taken on Aug. 6, reveals more bright spots.
One very large storm seen by the telescope has particularly interested researchers analyzing the views of Uranus. The storm reaches into the high altitudes of the planet's atmosphere, according to Keck representatives.
"We are always anxious to see that first image of the night of any planet or SATELLITE, as we never know what it might have in store for us," Imke de Pater, professor at UC Berkeley and team leader, said in a statement. "This extremely bright feature we saw on UT 6 August 2014 reminds me of a similarly bright storm we saw on Uranus’s southern hemisphere during the years leading up to and at equinox."
The new storm is reminiscent of a feature known as the "Berg," which disappeared in 2009, but could even have DATED back to NASA's Voyager probe's flyby of the planet in 1986, according to Keck. The Berg — so named because the storm looked like an iceberg sloughing off an ice shelf — became very bright in 2004 and started to move toward the planet's equator in 2005.
The new storm feature spotted by Keck is brighter than the Berg, according to Keck representatives, and it also looks similar. Scientists think that a vortex deeper in the atmosphere of Uranus might be associated with the bright spot.
Researchers will analyze data to measure exactly where it is located within the planet's atmosphere.
"Even after years of observing, a new picture of Uranus from Keck Observatory can stop me in my tracks and make me say Wow!" Heidi Hammel, a member of the observing team, said in the same statement.
Storms rage all across the SOLAR SYSTEM. At one point, Jupiter's Great Red Spot was once the size of three Earths, and a massive storm rages in Saturn's north pole.
Amateur astronomers on Earth can also spot Uranus in the night sky this month. The seventh planet from the sun rises in the late evening and can be seen in the constellation Pisces in the Northern Hemisphere.
Quelle: SC
2701 Views
Created with page4