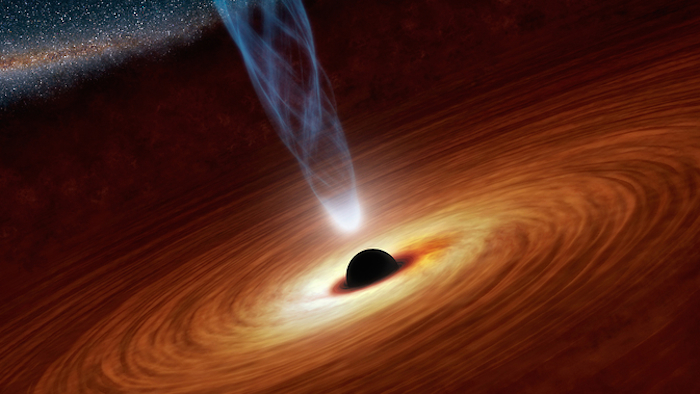 The regions around supermassive black holes shine brightly in X-rays. Some of this radiation comes from a surrounding disk, and most comes from the corona, pictured here in this artist's concept as the white light at the base of a jet. This is one of a few possible shapes predicted for coronas.
Image Credit: NASA/JPL-Caltech
.
NASA's Nuclear Spectroscopic Telescope Array (NuSTAR) has captured an extreme and rare event in the regions immediately surrounding a supermassive black hole. A compact source of X-rays that sits near the black hole, called the corona, has moved closer to the black hole over a period of just days.
"The corona recently collapsed in toward the black hole, with the result that the black hole's intense gravity pulled all the light down onto its surrounding disk, where material is spiraling inward," said Michael Parker of the Institute of Astronomy in Cambridge, United Kingdom, lead author of a new paper on the findings appearing in the Monthly Notices of the Royal Astronomical Society.
As the corona shifted closer to the black hole, the gravity of the black hole exerted a stronger tug on the X-rays emitted by it. The result was an extreme blurring and stretching of the X-ray light. Such events had been observed previously, but never to this degree and in such detail.
Supermassive black holes are thought to reside in the centers of all galaxies. Some are more massive and rotate faster than others. The black hole in this new study, referred to as Markarian 335, or Mrk 335, is about 324 million light-years from Earth in the direction of the Pegasus constellation. It is one of the most extreme of the systems for which the mass and spin rate have ever been measured. The black hole squeezes about 10 million times the mass of our sun into a region only 30 times the diameter of the sun, and it spins so rapidly that space and time are dragged around with it.
Even though some light falls into a supermassive black hole never to be seen again, other high-energy light emanates from both the corona and the surrounding accretion disk of superheated material. Though astronomers are uncertain of the shape and temperature of coronas, they know that they contain particles that move close to the speed of light.
NASA's Swift satellite has monitored Mrk 335 for years, and recently noted a dramatic change in its X-ray brightness. In what is called a target-of-opportunity observation, NuSTAR was redirected to take a look at high-energy X-rays from this source in the range of 3 to 79 kiloelectron volts. This particular energy range offers astronomers a detailed look at what is happening near the event horizon, the region around a black hole from which light can no longer escape gravity's grasp.
Follow-up observations indicate that the corona still is in this close configuration, months after it moved. Researchers don't know whether and when the corona will shift back. What is more, the NuSTAR observations reveal that the grip of the black hole's gravity pulled the corona's light onto the inner portion of its superheated disk, better illuminating it. Almost as if somebody had shone a flashlight for the astronomers, the shifting corona lit up the precise region they wanted to study.
The new data could ultimately help determine more about the mysterious nature of black hole coronas. In addition, the observations have provided better measurements of Mrk 335's furious relativistic spin rate. Relativistic speeds are those approaching the speed of light, as described by Albert Einstein's theory of relativity.
"We still don't understand exactly how the corona is produced or why it changes its shape, but we see it lighting up material around the black hole, enabling us to study the regions so close in that effects described by Einstein's theory of general relativity become prominent," said NuSTAR Principal Investigator Fiona Harrison of the California Institute of Technology (Caltech) in Pasadena. "NuSTAR's unprecedented capability for observing this and similar events allows us to study the most extreme light-bending effects of general relativity."
NuSTAR is a Small Explorer mission led by Caltech and managed by NASA's Jet Propulsion Laboratory (JPL) in Pasadena for NASA's Science Mission Directorate in Washington. The spacecraft was built by Orbital Sciences Corporation in Dulles, Virginia. Its instrument was built by a consortium including Caltech, JPL, the University of California, Berkeley, Columbia University, New York, NASA's Goddard Space Flight Center, Greenbelt, Maryland, the Danish Technical University in Denmark, Lawrence Livermore National Laboratory in Livermore, California, ATK Aerospace Systems in Goleta, California, and with support from the Italian Space Agency (ASI) Science Data Center.
. 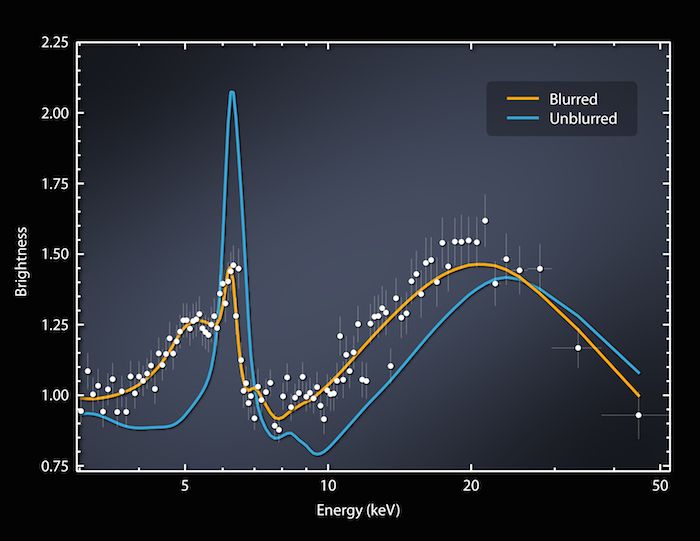