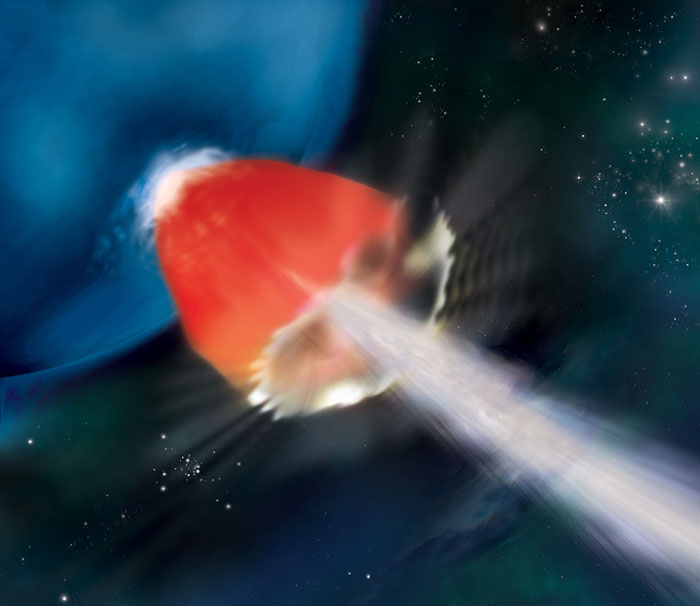 Out of An Hours-long Explosion, A Stand-In For The First Stars

In this artist's rendering of GRB 130925A, a sheath of hot, X-ray-emitting gas (red) surrounds a particle jet (white) blasting through the star's surface at nearly the speed of light. The source may have been a metal-poor blue supergiant, an important proxy for the universe's first stars.

Astronomers analyzing a long-lasting blast of high-energy light observed in 2013 report finding features strikingly similar to those expected from an explosion from the universe's earliest stars. If this interpretation is correct, the outburst validates ideas about a recently identified class of gamma-ray burst and serves as a stand-in for what future observatories may see as the last acts of the first stars.
"One of the great challenges of modern astrophysics has been the quest to identify the first generation of stars to form in the universe, which we refer to as Population III stars," explained lead scientist Luigi Piro, the director of research at the Institute for Space Astrophysics and Planetology in Rome, a division of Italy's National Institute for Astrophysics (INAF). "This important event takes us one step closer."
Gamma-ray bursts (GRBs) are the most luminous explosions in the universe. The blasts emit outbursts of gamma rays -- the most powerful form of light -- and X-rays, and produce rapidly fading afterglows that can be observed in visible light, infrared and radio wavelengths. On average, NASA's Swift satellite, Fermi Gamma-ray Space Telescope and other spacecraft detect about one GRB each day.
Shortly after 12:11 a.m. EDT on Sept. 25, 2013, Swift's Burst Alert Telescope triggered on a spike of gamma rays from a source in the constellation Fornax. The spacecraft automatically alerted observatories around the world that a new burst -- designated GRB 130925A, after the date -- was in progress and turned its X-ray Telescope (XRT) toward the source. Other satellites also detected the rising tide of high-energy radiation, including Fermi, the Russian Konus instrument onboard NASA's Wind spacecraft, and the European Space Agency's (ESA) INTEGRAL observatory.
The burst was eventually localized to a galaxy so far away that its light had been traveling for 3.9 billion years, longer than the oldest evidence for life on Earth.
, 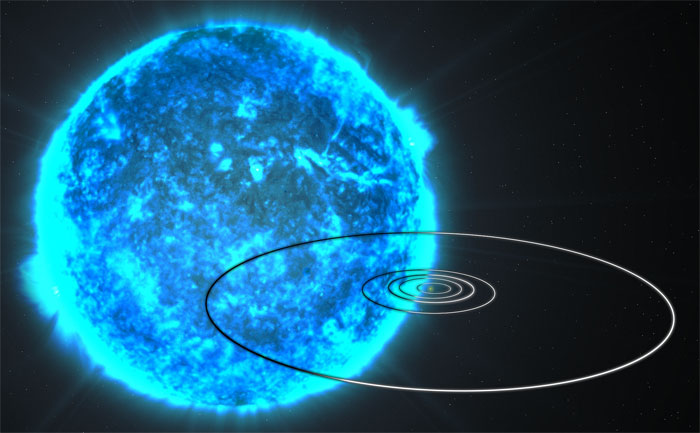 A blue supergiant star, illustrated here, may be the most likely source of ultra-long gamma-ray bursts like GRB 130925A, which last hours rather than seconds. These stars contain about 20 times the sun's mass and may reach sizes large enough to span Jupiter's orbit.
.
Astronomers have observed thousands of GRBs over the past five decades. Until recently, they were classified into two groups, short and long, based on the duration of the gamma-ray signal. Short bursts, lasting only two seconds or less, are thought to represent a merger of compact objects in a binary system, with the most likely suspects being neutron stars and black holes. Long GRBs may last anywhere from several seconds to several minutes, with typical durations between 20 and 50 seconds. These events are thought to be associated with the collapse of a star many times the sun's mass and the resulting birth of a new black hole.
GRB 130925A, by contrast, produced gamma rays for 1.9 hours, more than a hundred times greater than a typical long GRB. Observations by Swift's XRT revealed an intense and highly variable X-ray afterglow that exhibited strong flares for six hours, after which it finally began the steady fadeout usually seen in long GRBs.
"GRB 130925A is a member of a rare and newly recognized class we call ultra-long bursts," said Eleonora Troja, a visiting research scientist at NASA's Goddard Space Flight Center in Greenbelt, Maryland, and a member of the study team. "But what really sets it apart is its unusual X-ray afterglow, which provides the strongest case yet that ultra-long GRBs come from stars called blue supergiants."
Astronomers think Wolf-Rayet stars best explain the origin of long GRBs. Born with more than 25 times the sun's mass, these stars burn so hot that they drive away their outer hydrogen envelopes through an outflow called a stellar wind. By the time it collapses, the star's outer atmosphere is essentially gone and its physical size is comparable to the sun's. A black hole forms in the star's core and matter falling toward it powers jets that burrow through the star. The jets continue operating for a few tens of seconds -- the time scale of long GRBs.
Because ultra-long GRBs last hundreds of times longer, the source star must have a correspondingly greater physical size. The most likely suspect, astronomers say, is a blue supergiant, a hot star with about 20 times the sun's mass that retains its deep hydrogen atmosphere, making it roughly 100 times the sun's diameter. Better yet, blue supergiants containing only a very small fraction of elements heavier than helium -- metals, in astronomical parlance -- could be substantially larger. A star's metal content controls the strength of its stellar wind, and this in turn determines how much of its hydrogen atmosphere it retains before collapse. For the largest blue supergiants, the hydrogen envelope would take hours to fall into the black hole, providing a sustained fuel source to power ultra-long GRBs.
Writing in the July 10 edition of The Astrophysical Journal Letters, the researchers note that radio observations of the GRB afterglow show that it displayed nearly constant brightness over a period of four months. This extremely slow decline suggests that the explosion's blast wave was moving essentially unimpeded through space, which means that the environment around the star is largely free of material cast off by a stellar wind.
The burst's long-lived X-ray flaring proved a more puzzling feature to explain, requiring observations from Swift, NASA's Chandra X-ray Observatory and ESA's XMM-Newton satellite to sort out. As the high-energy jet bores through the collapsing star, its leading edge rams into cooler stellar gas and heats it. This gas flows down the sides of the jet, surrounding it in a hot X-ray-emitting sheath. Because the jet travels a greater distance through a blue supergiant, this cocoon becomes much more massive than is possible in a Wolf-Rayet star. While the cocoon should expand rapidly as it exits the star, the X-ray evidence indicates that it remained intact. The science team suggests that magnetic fields may have suppressed the flow of hot gas across the cocoon, keeping it confined close to the jet.
"This is the first time we have detected this thermal cocoon component, likely because all other known ultra-long bursts occurred at greater distances," said Piro.
The astronomers conclude that the best explanation for the unusual properties of GRB 130925A is that it heralded the death of a metal-poor blue supergiant, a model they suggest likely characterizes the entire ultra-long class.
Stars make heavy elements throughout their energy-producing lives and during their death throes in supernova explosions and GRBs. Each generation enriches interstellar gas with a greater proportion of metals, but the process is not uniform and metal-poor galaxies still exist nearby. Looking farther into the universe means looking deeper into the past, toward earlier stellar generations formed out of increasingly metal-poor gas. Astronomers think Population III stars ended their lives as blue supergiants, so GRB 130925A may prove to be a valuable nearby analog to phenomena we may one day detect from the universe's most distant stars.
Quelle: NASA
Astronomie
« Zum vorherigen Eintrag Zum nächsten Eintrag »
3051 Views
Created with page4