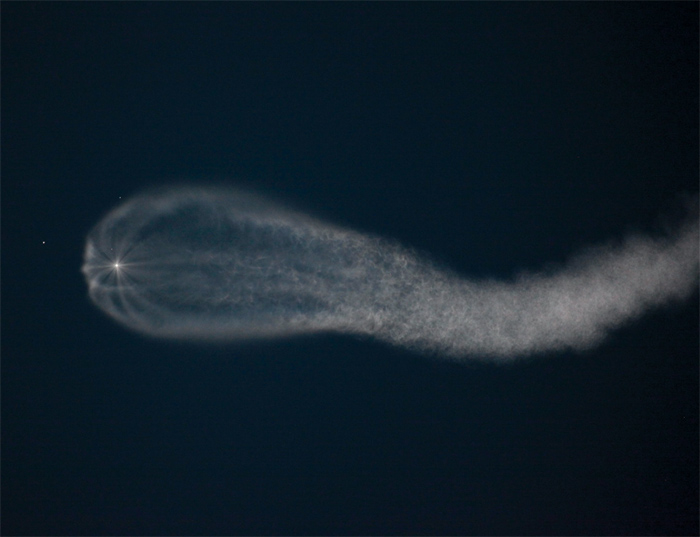 Jellyfish in the sky was a high-flying rocket plume / Foto: Roscosmos

Deep in the sea or high in the sky? A Russian Soyuz rocket produced this eerie jellyfish-like plume as it climbed up through the thin air of near space.
Soon after launch on the morning of Tuesday 8 July, clear weather at the Russian space base in Baikonur, Kazakhstan, allowed photographer Anatoly Zak to capture the remarkable pattern on camera.
According to Jonathan McDowell at the Harvard-Smithsonian Center for Astrophysics in Cambridge, Massachusetts, this is just one of many spectacular formations this kind of rocket can make as the core-stage rocket plume balloons out in the thin air high in the atmosphere. The cross at the top of the formation was made by the Soyuz's four boosters.
"It looks so interesting because we're not used to seeing gas dynamics in a near-vacuum. At that altitude there's not really any weather to interfere with the gases, so the gases form very regular formations and fill up a lot of space," says McDowell.
Strange formations like this have been catching the eyes of UFO-spotters since the cold war, when the Soviet Union started launching spy satellites on the same types of rockets from its once-secret launch pads.
The rocket's main payload was the 2.7-tonne Russian Meteor-M2 satellite, the second of its kind launched to watch global weather, the ozone layer, radiation in orbit, the ocean surface temperature and ice conditions on Earth.
Quelle: NewScientist
UFO-Forschung
« Zum vorherigen Eintrag Zum nächsten Eintrag »
3106 Views
Created with page4