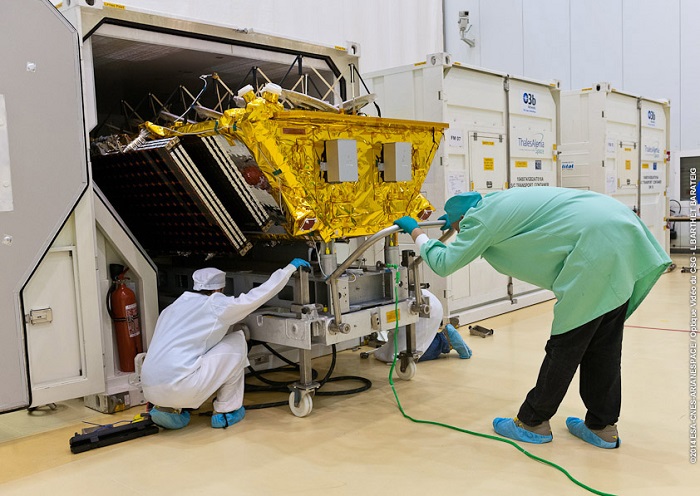 One of the four O3b Networks satellites is removed from its shipping container inside the Spaceport’s S1B clean room facility, where each of these Ku-band spacecraft will be entering their pre-launch processing. 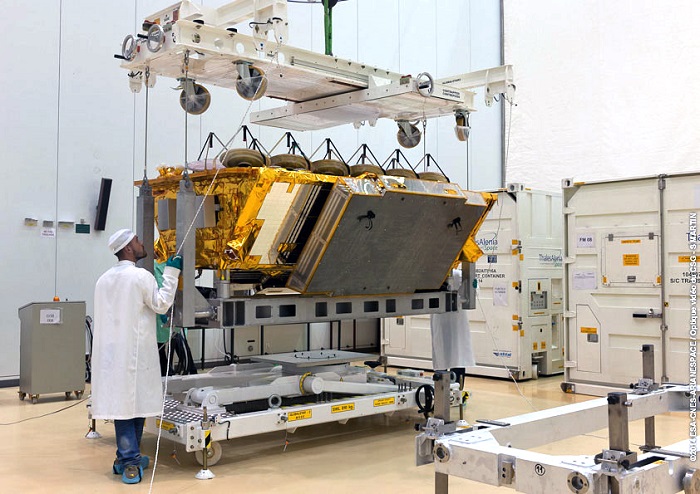 The next four satellites to serve O3b Networks in providing emerging market connectivity worldwide have entered their checkout phase at the Spaceport in French Guiana, readying them for launch on an Arianespace Soyuz mission planned for late June/early July.

These spacecraft are now inside the Spaceport’s S1B clean room facility, and are being removed from the individual shipping containers that protected them during a trans-Atlantic cargo jetliner flight from Europe to the equatorial launch site.

The O3b Networks satellites were produced by Thales Alenia Space, and have a trapezoidal-shaped main body to facilitate their integration on the Soyuz vehicle’s payload dispenser system. Outfitted with Ka-band transponders, the four spacecraft are to be positioned after launch at a medium-orbit altitude of 8,062 km.

This upcoming Soyuz mission is designated Flight VS08 in Arianespace’s launcher family numbering system, signifying the eighth liftoff of the medium-lift workhorse from the Spaceport since its 2011 introduction at French Guiana.

Arianespace orbited the initial four O3b Networks satellites on another Soyuz mission performed in June 2013. It marked the first step in O3b Networks’ creation of a space-based constellation to provide billions of consumers and businesses in nearly 180 countries with low-cost, high-speed, low latency Internet and mobile connectivity – delivering services over Asia, Africa, South America, Australia and the Middle East.

Soyuz is part of Arianespace’s three-member launcher family, which also includes the heavy-lift Ariane 5 and lightweight Vega – which also are operated at the Spaceport. 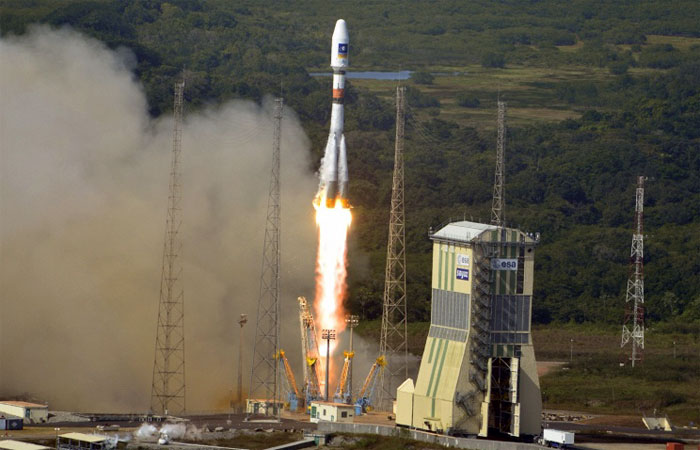 Russia’s Soyuz-ST-B rocket carrying the European communication satellite 03B from the Kourou space site in French Guiana has been scheduled for July 10, the press-service of Russia’s space agency Roskosmos told ITAR-TASS. The rocket is now being tested and the booster Fregat fuelled.
Soyuz-ST is a variety of the three-stage rocket Soyuz-2, adapted for launches from the Guiana space centre. The first four 03B satellites were put in orbit in June 2013. It was the first step to create a large orbital cluster for Internet access from remote regions. The group of satellites may be built up to 20. Over one billion dollars has been raised for the project. The satellite network will cover a vast expanse from Spain to South Africa, including a greater part of South America and Asia and all islands in the South Pacific. 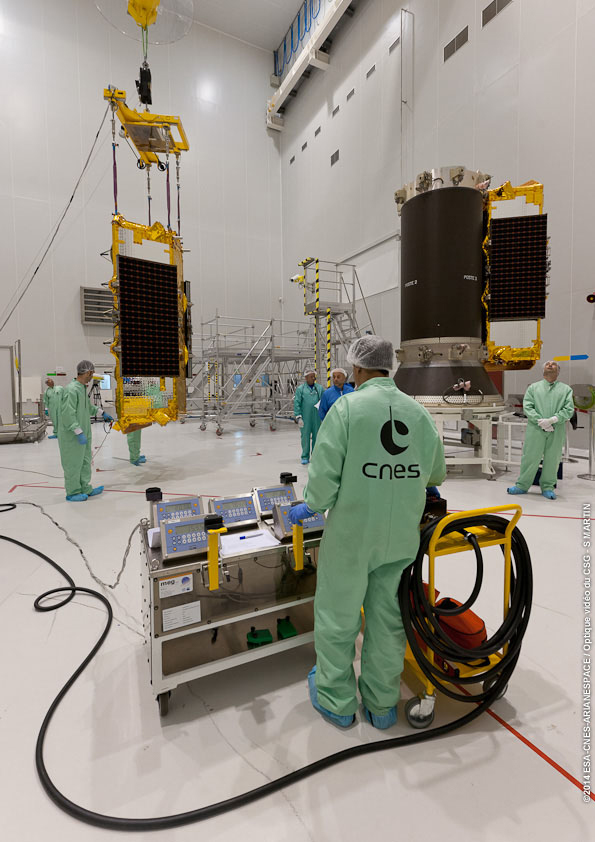 The second of four O3b Networks satellites to be orbited on Arianespace’s upcoming Soyuz mission is integrated on the dispenser system during activity in the Spaceport’s S5 payload preparation building.  Soyuz Flight VS08 will be the second performed for O3b Networks. 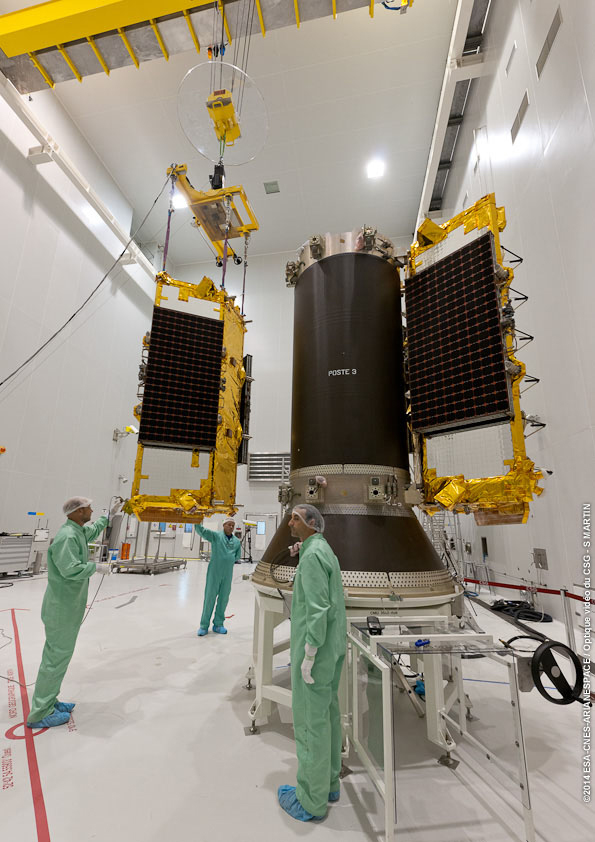 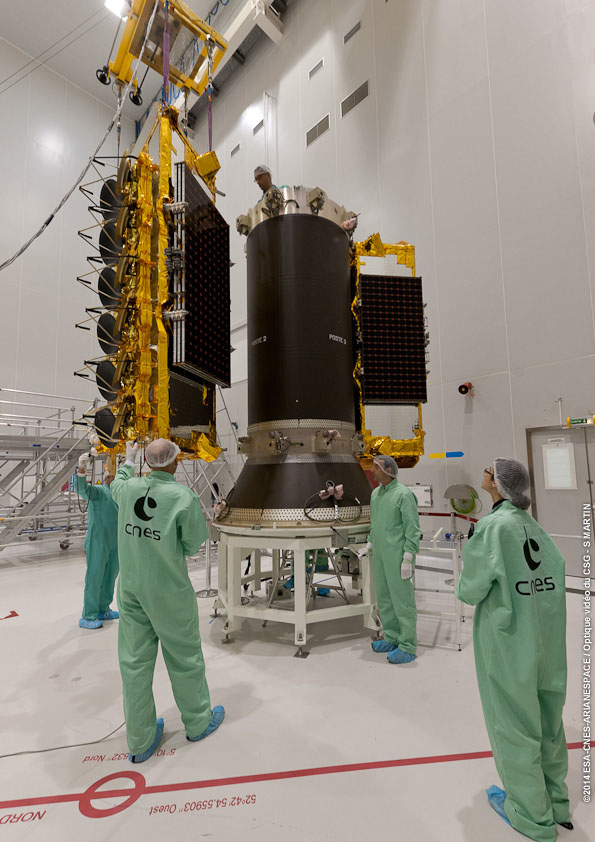 Payload integration is underway for the four O3b Networks connectivity satellites to be orbited by Arianespace on its next Soyuz mission, scheduled for liftoff on July 10 from the Spaceport in French Guiana.
This integration involves a step-by-step installation of the spacecraft on a tube-shaped dispenser system, with the activity taking place inside the Spaceport’s S5 payload preparation facility.
The dispenser will release O3b Networks’ four satellites into a medium-altitude Earth orbit during the mission, enabling these platforms to join the company’s initial batch of connectivity spacecraft lofted by Arianespace aboard another Soyuz in June 2013.
Thales Alenia Space produced the Ka-band relay platforms, which have a liftoff mass of approximately 700 kg. each and will create a constellation providing telecommunications and Internet services over Asia, Africa, South America, Australia and the Middle East – combining the global reach of satellite coverage with the speed of a fiber-optic network.
The July 10 flight will be Arianespace’s eighth mission from French Guiana with its workhorse medium-lift Soyuz, and carries the VS08 designation in the company’s launcher family numbering system.  Soyuz joins Arianespace’s other two launchers in service at the Spaceport: the heavy-lift Ariane 5, and lightweight Vega.
.
Quelle: arianespace 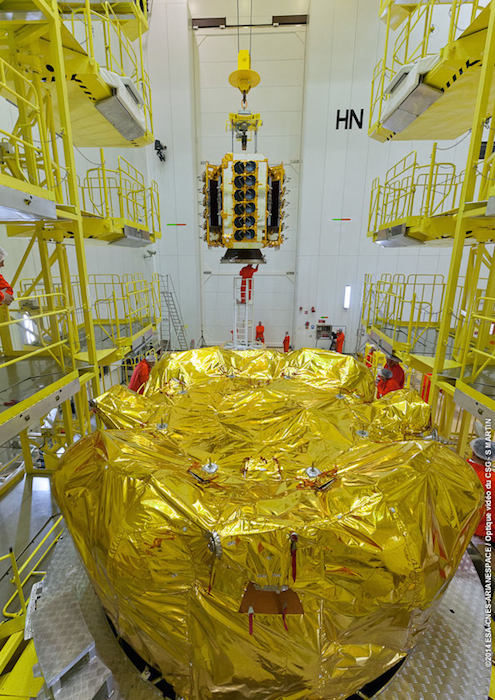 The mating of O3b Networks’ four satellites to the Fregat upper stage is shown in this series of photos, beginning with its hoisting inside the Spaceport’s S3B payload preparation facility, and their positioning atop Fregat – which is covered by gold-colored thermal insulation. 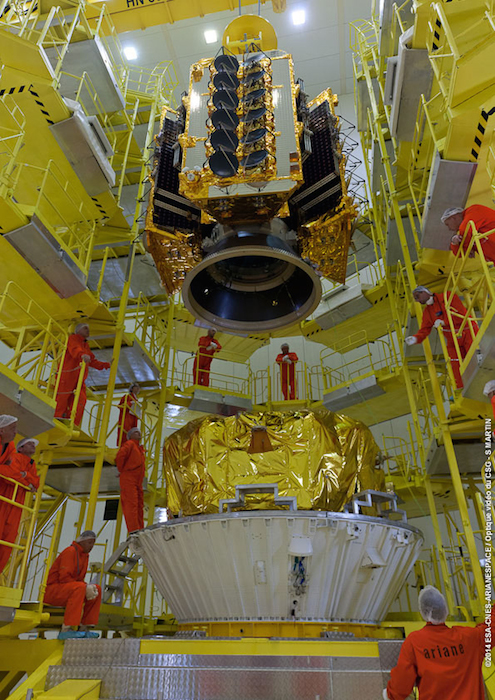 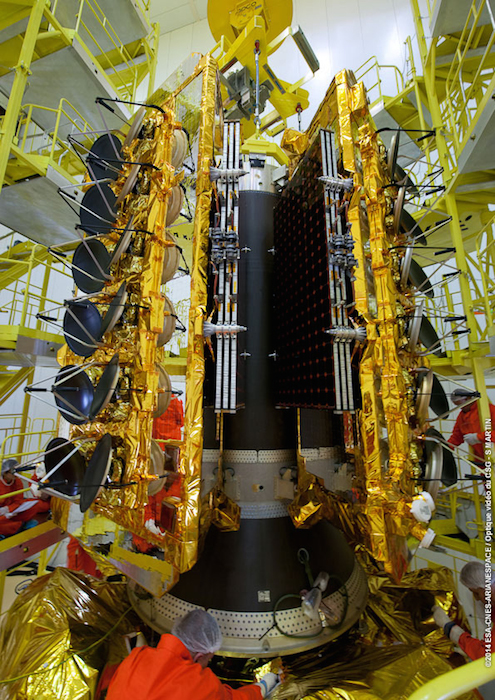 The next satellite cluster for O3b Networks’ affordable, high-speed connectivity system has been mated to its Fregat upper stage in French Guiana, marking one of the final steps in Arianespace’s Soyuz launch campaign for a liftoff next week from the Spaceport.
During operations in the Spaceport’s S3B payload preparation facility, the four satellites – which previously were integrated on their tube-shaped dispenser system – have been mated atop Soyuz’ Fregat upper stage. The highly flexible Fregat stage will perform multiple burns during Arianespace’s July 10 flight, deploying the spacecraft into orbit.
This week’s mating operation with Fregat will be followed by Soyuz’ subsequent rollout to the ELS launch complex near the French Guiana town of Sinnamary, allowing the satellite payload to be installed on the medium-lift workhorse launcher.
The July 10 mission, designated Flight VS08 in Arianespace’s launcher family numbering system, will be the eighth with Soyuz since the vehicle’s 2011 introduction at the Spaceport – joining the company’s heavy-lift Ariane 5 and lightweight Vega.
Flight VS08 will be the second Arianespace mission at the service of O3b Networks, following the orbiting of its initial four satellites with Soyuz in June 2013.
O3b Networks’ Ka-band relay platforms will create a satellite constellation for telecommunications and Internet services that combine high speed and affordable costs for billions of people across the world who do not yet have adequate internet access.  Thales Alenia Space produced the spacecraft, which have a liftoff mass of approximately 700 kg. each.
Quelle: arianespace 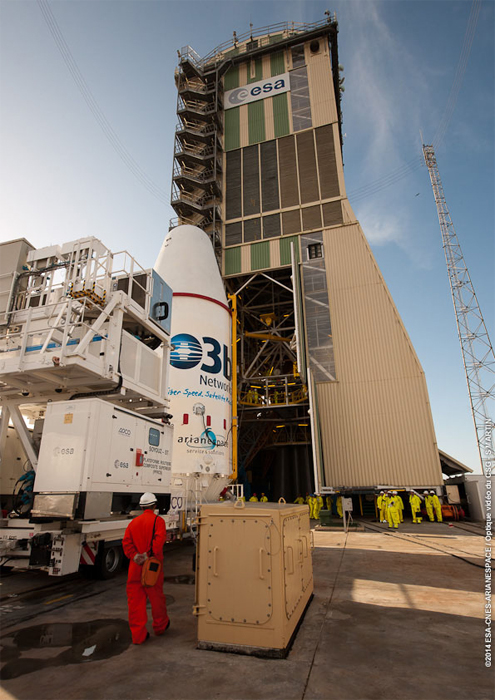 Integration of Flight VS08’s “upper composite” is shown in these photos from the Spaceport’s ZLS launch complex at French Guiana, beginning with its delivery by a special transporter to the mobile gantry that protects Arianespace’s Soyuz. This composite – composed of O3b Networks’ four spacecraft, the Fregat upper stage, plus the protective payload fairing – was then hoisted inside the gantry, and installed atop the workhorse medium-lift vehicle in the gantry’s upper level to complete its build-up. 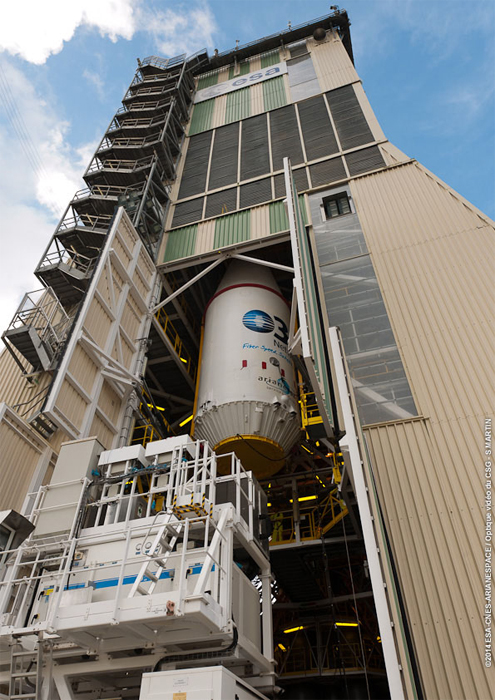 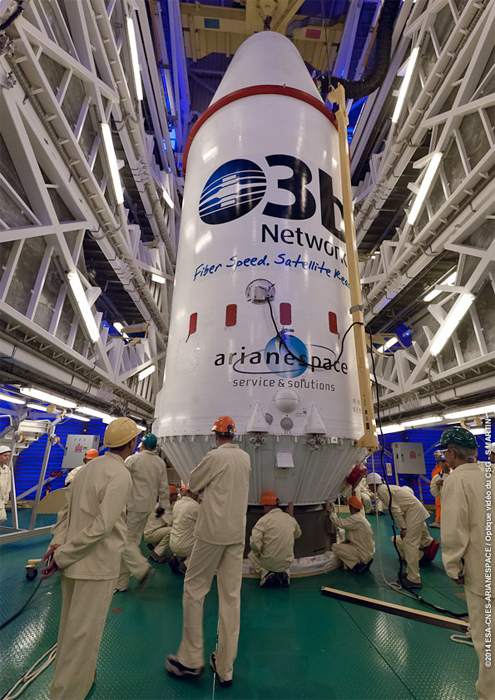 Soyuz Flight VS08
Arianespace’s next medium-lift Soyuz to be launched from French Guiana is now complete following the integration of its “upper composite,” made up of four O3b Networks connectivity satellites, their protective payload fairing and the Fregat upper stage.
This activity was performed at the Spaceport’s ZLS launch complex near the town of Sinnamary. It began with the upper composite’s transfer from the S3B payload preparation facility on a special transporter, and was followed by hoisting to the upper level of a purpose-built mobile gantry – which provides a protected environment for the vertical installation.
Final checkout of the Soyuz launcher is now underway, leading up to the Arianespace liftoff planned on Thursday, July 10 at precisely 03:55:56 p.m. local time in French Guiana. This mission is designated Flight VS08 in the company’s numbering system, representing the workhorse Soyuz’ eighth flight from French Guiana.
The upcoming launch’s payload – four Thales Alenia Space-produced satellites that will join O3b Networks’ pioneering high-speed connectivity system – are to be deployed during a flight lasting 2 hrs., 22 min. Equipped with Ka-band transponders, the satellites will be positioned at a medium-orbit altitude of 8,062 km.
Total payload lift performance is estimated at 3,204 kg., including a combined mass of approximately 2,800 kg. for the four spacecraft – which will create a constellation providing telecommunications and Internet services over Asia, Africa, South America, Australia and the Middle East, combining the global reach of satellite coverage with the speed of a fiber-optic network.
Flight VS08 will be the second Arianespace mission at the service of O3b Networks, following the orbiting of its initial four satellites with Soyuz in June 2013.
Quelle: arianespace

Arianespace launches O3b satellites on Soyuz mission
Arianespace and O3b team up to offer an innovative spaceborne solution that benefits people on Earth
On Thursday, July 10, 2014 at 3:55 pm local time in French Guiana, Arianespace successfully performed its second launch for O3b Networks, following the successful launch of the operator's first four satellites last year. With this eighth Soyuz launch from the Guiana Space Center, all successful, Arianespace proves its long-term support for new operators and helps reduce the world's digital divide.
O3b, a mission to provide low-cost, high-speed Internet access to the “other 3 billion” people on Earth
Arianespace lofted four more satellites in the O3b constellation (the "Other 3 billion") into an equatorial orbit. Built by Thales Alenia Space as prime contractor, these four satellites will enable O3b Networks to supply broadband Internet access at moderate prices to emerging markets in Asia, Africa, Latin America, Australia and the Middle East, totaling nearly 150 countries surrounding the equator where broadband access is rarely available. Following this launch, the O3b constellation will be deployed in its initial configuration and will be fully operational.
Arianespace's partnership with O3b clearly reflects one of the company's basic values, namely making the benefits of space available to people on Earth.
Arianespace, trusted partner for new operators
Arianespace has long supported new operators as they enter the market, by providing services tailored to their specific requirements, backed by launch systems renowned for their reliability and availability. For O3b Networks, Arianespace and partners developed a special technique to deploy these satellites into equatorial orbit, combining a dedicated multiple launch configuration and an optimized launch campaign. Furthermore, access to an export credit arrangement facilitated project financing. Arianespace is already gearing up for a third O3b launch, scheduled for the first quarter of 2015.
Arianespace, the global benchmark in launch services
With the Ariane 5, Soyuz and Vega launchers fully operational at the Guiana Space Center in French Guiana, Arianespace is the only launch services company in the world capable of launching all payloads into all orbits, from the smallest spacecraft to the largest geostationary satellites, as well as satellite clusters for constellations and cargo missions to the International Space Station. Arianespace continues to set the standard in launch services for all operators, and guarantee independent access to space.
Shortly after the official announcement of the orbital injection of the four O3b satellites, Stéphane Israël, Chairman and CEO of Arianespace, said: "We are very proud of our role in this outstanding project, which will reduce the digital divide by supplying broadband Internet access to populations in equatorial regions. I would like to thank O3b, a key customer for Arianespace, for continuing to place their trust in us for the second phase of
constellation deployment, which transforms their innovative vision into a reality. I would also like to congratulate Thales Alenia Space for the timely availability of the satellites, and our Russian partners for the unmatched reliability of the Soyuz launcher.
I would like to thank the ground industrialists, CNES/CSG teams, and the space center staff for their efforts on this fifth successful launch of the year. Thank you to the Arianespace teams for this latest success. More than ever, this reinforces Arianespace’s position as the world leader in space transportation in the framework of an exceptional year."