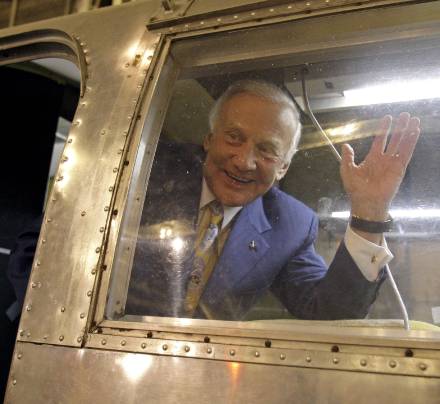 Col. Buzz Aldrin, former Apollo 11 lunar module pilot, waves from inside a NASA Mobile Quarantine Facility, identical to the one he spent time in immediately upon his return from his voyage to the moon.

Did Buzz Aldrin really see a UFO? Technically, yes.
On NASA's famed Apollo 11 mission to the moon, astronaut Buzz Aldrin said he spotted a light traveling alongside his spacecraft. In a very narrow sense of the term, the light qualified as a UFO.
.
During the Apollo 11 mission to the moon in 1969, Buzz Aldrin made history by being the second man to set foot on the surface of the moon.
He also became famous, in certain circles, for seeing a UFO.
During an "Ask Me Anything" session on the popular social networking service Reddit, the former astronaut opened up about the sighting, emphasizing that the unidentified object in question was definitely not an alien spaceship.
Recommended: Are you scientifically literate? Take our quiz
On one of his Reddit posts, Col. Aldrin explained, “On Apollo 11 in route to the Moon, I observed a light out the window that appeared to be moving alongside us. There were many explanations of what that could be, other than another spacecraft from another country or another world – it was either the rocket we had separated from, or the 4 panels that moved away when we extracted the lander from the rocket and we were nose to nose with the two spacecraft. So in the close vicinity, moving away, were 4 panels. And I feel absolutely convinced that we were looking at the sun reflected off of one of these panels. Which one? I don't know. So technically, the definition could be ‘unidentified.’”
“It was not an alien,” he added.
While Aldrin's explanation will no doubt be disappointing to some and likely ignored by the more hardcore conspiracy theorists, there are a few other UFO sightings by astronauts that some feel haven’t been satisfactorily explained.
In 2005, for instance, astronaut Leroy Chiao reportedly saw four mysterious lights pass by between him and the Earth. However, the explanation may be disappointingly mundane—brightly lit fishing boats at night on the Earth below may have been responsible, according to the Huffington Post. Chaio himself doubts that what he saw was the result of an alien spacecraft.
Apollo 14 astronaut Edgar Mitchell, by contrast, is convinced that aliens have been seen on Earth and that humans have made contact with them. He has publicly claimed that he has sources who have told him that UFOs have been covered up by the government, though he admits “I have not seen one personally,” according to Bloomberg.
Mitchell’s claims of UFO conspiracies place him in the minority of astronauts. Nevertheless, Buzz Aldrin clarified on Reddit that while he had never seen a UFO and doubted that humans have ever made contact with aliens, he does believe there is life elsewhere in the universe.
“There may be aliens in our Milky Way galaxy, and there are billions of other galaxies. The probability is almost CERTAIN that there is life somewhere in space. It was not that remarkable, that special, that unusual, that life here on earth evolved gradually, slowly, to where we are today.”
Aldrin’s Reddit session comes with the 45th anniversary of Apollo 11 just around the corner. The mission that departed Earth on July 16, 1969 to land on the moon on July 20th marked the first time in history that humans stood on the lunar surface.
Aldrin discussed a wide variety of topics for Reddit questioners, including the possibility of humans landing on Mars, his personal musings on what it was like to walk on the moon, and most importantly, what is favorite ice cream flavor is.
Aldrin’s answer to that question was enthusiastic and succinct.
Quelle: CS-Monitor
UFO-Forschung ja!
« Zum vorherigen Eintrag Zum nächsten Eintrag »
3010 Views
Created with page4