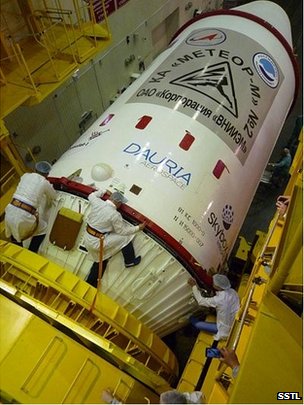 UK demo satellites set for launch
.
Two British spacecraft, including the first satellite made in Scotland, are due to go into orbit on Tuesday.
The pair will launch on a Soyuz rocket from Baikonur in Kazakhstan.
TechDemoSat-1 was prepared in Guildford by Surrey Satellite Technology Limited, with the assembly of UKube-1 undertaken at Clyde Space in Glasgow.
Both platforms will trial innovative components, sensors and instruments that their producers hope can go on to win future business.
TDS-1 and UKube-1 have emerged from government-backed programmes designed to spur growth in the British space sector.
Ministers have identified satellites as one of their "eight great technologies" that can help rebalance the economy.
Lift-off for the Soyuz is timed for 21:58 local time (16:58 BST).
The UK missions are actually secondary payloads on the flight; its main purpose is to launch a Russian meteorological satellite, Meteor-M2.
TechDemoSat-1 is the bigger of the British duo at 157kg.
Among its demonstration systems is a suite of instruments to study "space weather" - the storm of charged particles, mostly from our Sun, that envelop the Earth. These particles can prove problematic - and even limit the life of - spacecraft systems.
TDS-1 also carries an innovative approach to monitoring the state of the ocean surface. It works this out by looking at how GPS signals are scattered off the water.
UKube-1 is much smaller than its "English brother". The Scottish platform weighs just 3.5kg. But, again, it holds some smart technologies that their developers want to prove in orbit.
. 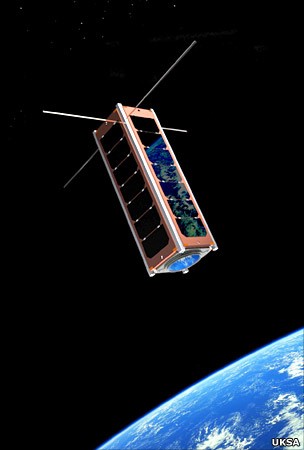 UKube-1 will be taking pictures of the Earth using a new imaging sensor
.
Among them is a new imaging sensor that will be used to take pictures of the planet, and a smart device that aims to generate random numbers by detecting impacts from space particles. Such a device might in the future form the basis of much more secure satellite communications.
Public funding for TDS-1 has come in large part from the government's Technology Strategy Board.
The UKube-1 project has been administered by the UK Space Agency.
But both SSTL and Clyde Space have invested their own cash in the ventures as well.
For Clyde Space, this is already paying dividends.
"This has been important for the development of our company," said sales manager Robin Sampson. "This has helped us mature into a complete satellite platform provider.
"Previously, we've tended to supply mainly spacecraft sub-systems, but this will be the first time we've put an entire satellite together to go into orbit. And already we've got more platform orders on our books," he told BBC News.
The intention is that UKube becomes a repeat programme. There should soon be an announcement on a UKube-2.
SSTL hopes the same will be true for TechDemoSat.
"A lot of people want to see TDS-1 work first, but we will continue to push for an ongoing programme," said the company's Doug Liddle.
. 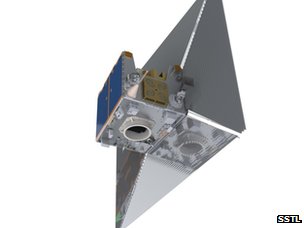 TDS-1 will deploy a large sail at the end of its mission to help bring it out of orbit promptly
.
"If you could guarantee a series of launches, it would be an extremely powerful tool for R&D and British industry.
"If it were like a timetable, like catching a bus, you could plan your developments much better. It's been shown to work for academia, for research programmes, and for commercial operators.
"To have that for demonstration satellites as a national capability would be a fantastic thing."
Among the seven missions on Tuesday's Soyuz flight is SkySat-2 - the second Earth observer for California's Skybox Imaging. The company, which is making snatches of video of the Earth's surface, hit the headlines last month when it was purchased by Google for $500m.
One satellite not going up is M3M. This Canadian platform was pulled from the manifest in April by the North American country's government amid the row over Russia's actions in Ukraine.
. 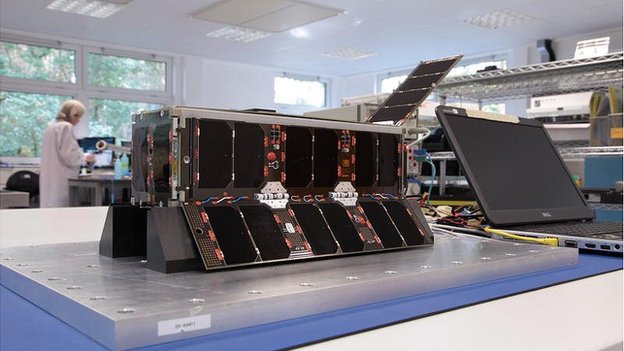 UKube-1 is the first satellite to be fully assembled in Scotland
.
Quelle: BBC
.
Update: 21.30 MESZ
.

Scotland's first satellite has been launched successfully in Kazakhstan according to the team who built it.
UKube-1 is a cubesat, packing six payloads into a space not much bigger than a shoebox.
Its experiments include a study of space weather and a project to let school pupils interact with the satellite.
It was commissioned by the UK Space Agency and built by Glasgow company Clyde Space.
The firm has a big share of the market for cubesat components and already has orders for another two complete satellites.
It says it is planning to mass-manufacture hundreds or even thousands more.
Strictly speaking it is not Mission Control Maryhill but it is not far from it.
The headquarters of Clyde Space is up a flight of stairs in a neat but unassuming building at Kelvin Science Park in Glasgow's West End.
They will not be running the mission from here but this is where they built the first Scottish satellite.
The basic cubesat concept is a cube ten by ten by ten centimetres. That's a litre into which, thanks to microelectronics, you can squeeze a lot of science.
The design of UKube-1 is based on three such boxes. It is what they call a 3U cubesat. Three litres of payload.
Clyde Space say this is the most advanced small satellite of its kind in the world and - they hope - the first of many. Because the economics of spaceflight are in their favour.
A cubesat could cost you around $250,000. Not the sort of thing you could buy out of the housekeeping money but in the satellite business it is close to peanuts.
The low weight means launch costs are also relatively low.
Universities, research institutes and - increasingly - businesses are seeing them as affordable options for getting experiments and services into Earth orbit.
A low orbit means the cubesat will burn up on re-entry after just a few years. But it should not cost too much to replace - and that is where Clyde Space foresee a huge growth area.
Mass manufacturer
They think cubesats will become a mass market, with some companies ordering hundreds at a time. Clyde Space think they could become the first mass manufacturer of small satellites with thousands of orders on their books.
But they are walking before they run. The publicity surrounding UKube-1 has helped them win orders for two more complete satellites. The business of building components and subsystems for cubesats has also continued to grow.
Turnover has doubled in a year. Staff numbers have increased by 50%. This is just part of a burgeoning Scottish space industry which many Scots don't yet realise exists.
A successful launch and deployment could change all that.
UKube-1 was launched aboard a Russian Soyuz rocket from the Baikonur cosmodrome in Kazakhstan.
It was the Soyuz which lifted many Soviet space pioneers to orbit when Baikonur was still part of the USSR. Its 21st century incarnation continues to combine reliability with relatively low cost.
UKube-1 is one of eight large and small satellites aboard for this launch, further underlining the economic arguments for both the cubesat concept and Soyuz.
Baikonur occupies a hallowed place in the history of spaceflight. Sputnik 1, Earth's first artificial satellite, lifted off from there. So did Yuri Gagarin, the first human in space.
The launch of Scotland's first satellite is admittedly a smaller milestone. But in Maryhill they'll be watching just as intently as those first satellite builders.
Quelle: BBC
.
Update: 9.07.2014
.

Soyuz rocket with seven satellites lifts off from Baikonur 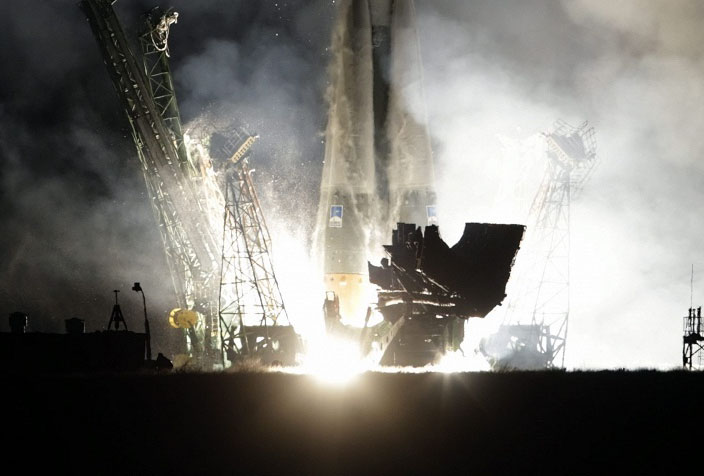 A Soyuz-2.1b rocket with several satellites aboard has lifted off from Baikonur Cosmodrome in Kazakhstan July 8.
The rocket will orbit seven satellites which include a second Meteor-M Earth remote sensing instrument intended for meteorological research and ozone and radiation monitoring in the near-Earth space. It weighs 2,778 kg and is built to operate for five years. It was created by the VNIIEM Research and Production Corporation “Space Monitoring Systems, Information and Control and Electromechanical Complexes” which makes space monitoring and information management systems.
The launch of the Meteor-M 2 satellite was initially scheduled for 2013 but then was postponed until June 28, 2014 and eventually moved to July 8 due to technical problems in the Fregat booster.
The small satellite Relek was created by the Lavochkin Research and Production Association which specializes in making unmanned space exploration vehicles. The satellite is intended for studying high-altitude electrical discharges, atmospheric phenomena and electron precipitation from the Earth’s radiation belts.
Russia’s first private spacecraft DX1 made by the Moscow regional company Dauria Aerospace was built in the Skolkovo technology park to monitor the movement of ships. This is the first such satellite in Russia.
The US satellite SkySat-2 will gather and process data and transmit high-definition images and videos.
The British satellite TechDemoSat-1 will monitor the surface of the ocean and explore outer space.
Another British craft UKube-1 is a 4 kg microsatellite. It will study the near-Earth space and its impact on spaceships.
The Norwegian satellite AISSat-2 is a 7 kg nano-satellite built to monitor the movement of ships and identify them.
Quelle: ITARTASS