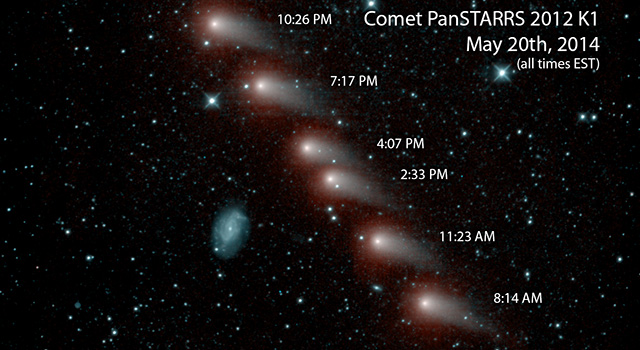 NASA's NEOWISE mission captured a series of infrared images of comet C/2012 K1 -- also referred to as comet Pan-STARRS -- as it swept across our skies in May 2014.

Comet Pan-STARRS Marches Across the Sky

NASA's NEOWISE mission captured a series of pictures of comet C/2012 K1 -- also known as comet Pan-STARRS -- as it swept across our skies in May 2014.
The comet is named after the astronomical survey project called the Panoramic Survey Telescope and Rapid Response System in Hawaii, which discovered the icy visitor in May 2012.
Comet Pan-STARRS hails from the outer fringes of our solar system, from a vast and distant reservoir of comets called the Oort cloud.
The comet is relatively close to us -- it was only about 143 million miles (230 million kilometers) from Earth when this picture was taken. It is seen passing a much more distant spiral galaxy, called NGC 3726, which is about 55 million light-years from Earth, or 2 trillion times farther away than the comet.
Two tails can be seen lagging behind the head of the comet. The bigger tail is easy to see and is comprised of gas and smaller particles. A fainter, more southern tail, which is hard to spot in this image, may be comprised of larger, more dispersed grains of dust.
Comet Pan-STARRS is on its way around the sun, with its closest approach to the sun occurring in late August. It was visible to viewers in the northern hemisphere through most of June. In the fall, after the comet swings back around the sun, it may be visible to southern hemisphere viewers using small telescopes.
The image was made from data collected by the two infrared channels on board the NEOWISE spacecraft, with the longer-wavelength channel (centered at 4.5 microns) mapped to red and the shorter-wavelength channel (3.4 microns) mapped to cyan. The comet appears brighter in the longer wavelength band, suggesting that the comet may be producing significant quantities of carbon monoxide or carbon dioxide.
Originally called the Wide-field Infrared Survey Explorer (WISE), the NEOWISE spacecraft was put into hibernation in 2011 after its primary mission was completed. In September 2013, it was reactivated, renamed NEOWISE and assigned a new mission to assist NASA's efforts to identify the population of potentially hazardous near-Earth objects. NEOWISE is also characterizing previously known asteroids and comets to better understand their sizes and compositions.
Quelle: NASA
« Zum vorherigen Eintrag Zum nächsten Eintrag »
3060 Views
Created with page4