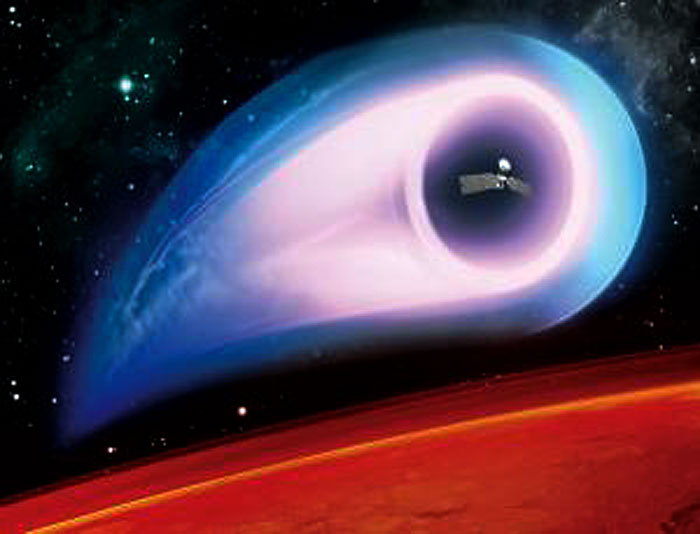 PARACHUTES made of plasma trapped in a magnetic field could soon be helping space probes glide safely back to Earth.
Two private aerospace companies have won NASA contracts to demonstrate magnetoshell aerocapture, a way of shrouding a falling spacecraft in a magnetic bubble akin to the plasma shield around Earth. But whereas Earth's magnetosphere protects it from solar radiation, a similar bubble around a spacecraft creates drag, slowing it down. If a test next year proves successful, the technique could help future probes land heavy loads on Mars or bring back human missions to deep space.
"I'm really excited about these awards that have been made," says Michelle Munk at NASA's Space Technology Mission Directorate in Hampton, Virginia. "It's a low-cost way to investigate these kinds of things and see if they will bear fruit."
When a spacecraft enters a planet's atmosphere, it ploughs into air molecules at high speed, creating intense heat. Structures designed to create drag can slow the descent, but probes must also rely on heat shields that either burn away or insulate to protect the cargo inside. The heavier the payload, the more challenging the task of getting the craft down in one piece.
For larger landers, NASA has been looking at lightweight technologies such as an inflatable "flying saucer" for Mars missions, tested last week over Hawaii (see 'Flying saucer' makes a splash). Magnetoshell aerocapture is one of the most revolutionary ideas, says Munk. It not only slows a craft's descent but can also greatly reduce heating.
Last month, aerospace firm MSNW of Redmond, Washington, won a NASA grant to demonstrate the technique on a CubeSat. The small, boxy satellite should be delivered to the International Space Station in 2015. It will then be deployed and attempt to enter Earth's atmosphere without burning up.
The satellite will carry a copper coil, powered by a lithium-ion battery, that generates a magnetic field around the probe. As it descends, the spacecraft will eject a small amount of plasma. This gets trapped in the magnetic field, creating a protective bubble that stops air molecules colliding with the craft and producing heat.
The air molecules flow into the plasma bubble and absorb electrons from it, becoming ionised. The newly ionised air becomes trapped in the magnetic field, and the craft ends up dragging a patch of atmosphere with it, effectively creating a parachute of gas.
The CubeSat's magnetoshell aerocapture system will be built by Altius Space Machines of Louisville, Colorado. NASA awarded it a contract to develop such systems, which will feature an external magnetic coil up to 5 metres across. These could be used on larger landers, including human missions to deep space that need to return to Earth, says Altius's Jonathan Goff.
The system has hefty power requirements that will strain the limits of any battery the CubeSat could carry, says Goff. But if the test succeeds, it could also boost efforts to make rockets reusable, allowing parts discarded in orbit to return to Earth intact, he says. "Basically it's a way of moving beyond the Apollo throwaway philosophy."
Quelle: NewScientist
« Zum vorherigen Eintrag Zum nächsten Eintrag »
3111 Views
Created with page4