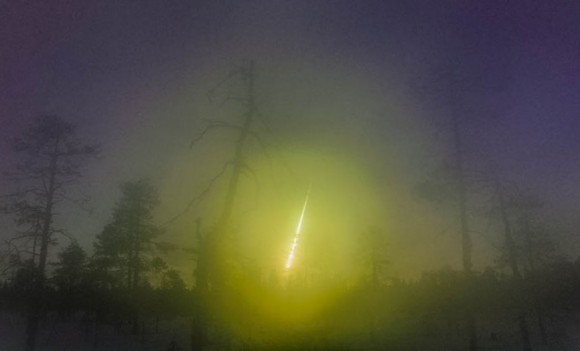 Amateur astronomer and physics teacher Asko Aikkila caught this image of the Kola fireball on videotape in Kuusamo, Finland on April 19, 2014. The picture has been processed to enhance the details. Credit: Asko Aikkila / Finnish Fireball Network
.
A spectacular fireball that crackled across the sky near the Russia-Finnish border on April 19th this year left more than a bright flash. A team of meteor researchers from Finland, Russia and the Czech Republic scoured the predicted impact zone and recently discovered extraterrestrial booty.
.

A 120 gram fragment (left) of the Annama meteorite found on May 29, 2014. Streamlines of molten material heated during atmospheric entry can be seen on the crust. At right, a 48g fragment found on the following day. Credit: Jakub Haloda (left) and Grigory Yakovlev
.
There’s a lot of excitement about the fall because it’s the first time a meteorite was found based on coordinated all-sky camera network observations by the Ursa Finnish Fireball Network.  Esko Lyytinen of the network with help from Jarmo Moilanen and Steinar Midtskogen reconstructed the meteoroid’s trajectory and dark flight (when it’s no longer luminous but yet to strike the ground) using simulations based on photos, videos and eyewitness reports.
. 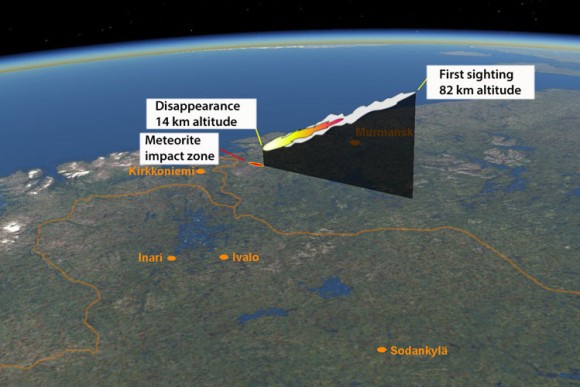 Kola fireball meteors fell near the Russian-Norwegian border. The
fireball trajectory was modeled  byEsko Lyytinen of the Ursa Finnish Fireball Network. Credit: Kuva Mikko Suominen / Celestia with info boxes translated by the author
.
The initial mass of meteoroid is estimated at about 1,100 pounds (500 kg). Much of that broke apart in the atmosphere and fell harmlessly as smaller stones. An international team of scientists mounted a 5-day expedition in late May after snow melt and before green up to uncover potential space rocks in the strewnfield, the name given to the oval-shaped zone where surviving fragments pepper the ground.
On May 29, 2014, first 120 gram (4.2 ounce) meteorite fragment was found by Nikolai Kruglikov of Russia’s Ural Federal University on a forest road within the predicted impact area. The crew had been searching 1o hours a day when Kruglikov stopped the car to check out a suspect rock:
“Suddenly he started dancing and yelling. At first I could hardly believe it was a true discovery, but then I checked the composition of the rock using my instrument”, said Tomas Kohout, University of Helsinki physicist who participated in the hunt. The fusion-crusted stone displayed classic flow features from melting rock during high-speed atmospheric entry.
The very next day a second 48 gram crusted meteorite popped up. More are undoubtedly out there but the heavy brush numerous lakes make the finding challenging.
The crew is calling the new arrival the ‘Annama meteorite’ as it fell near the Annama River in Russia about 62 miles west of Murmansk.  The Czech Geological Survey examined the space rocks and determined them to be ordinary chondrites representing the outer crust of an asteroid that got busted to bits in a long-ago collision. More than 95% of stony meteorites fall into this category including the 2013 fireball of Chelyabinsk, Russia.
“The Kola fireball is a rarity – it is one of only 22 cases where it was possible to determine its pre-impact solar system orbit before the impact with Earth’s atmosphere,” says Maria Gritsevich of the Finnish Geodetic Institute. “Knowing where the meteorite originates will help us better understand the formation and evolution of the solar system.” Congratulations Ursa!
.
Video-Aufnahmen von Feuerball hier: https://www.youtube.com/watch?v=RsWdSf01s4c
.
Quelle: UT
« Zum vorherigen Eintrag Zum nächsten Eintrag »
3012 Views
Created with page4