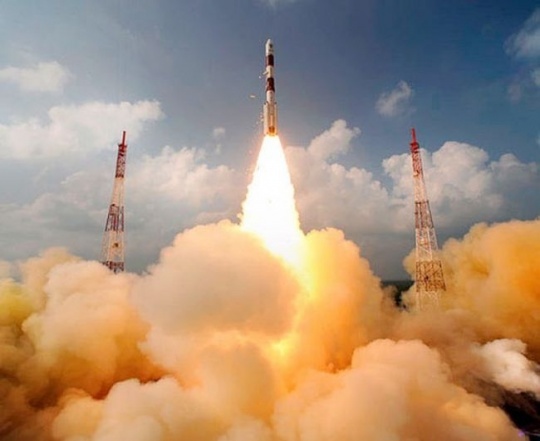 Indian Space Research Organization (Isro) is planning to launch its next rocket PSLV C23 carrying a French remote sensing satellite SPOT 7, along with four others from Sriharikota spaceport on June 26, a senior official said on Friday.

SPOT 7 is an Earth observing satellite, similar to Indian Remote Satellite System (IRSS), he said, adding four other satellites would also be launched on the same day.

This time around, Isro would use the core-only edition of the launch vehicle PSLV, he said.

Asked if there would be any change in the date of launch, he said the date and time also depend on the availability of VIPs, if any, witnessing the launch.

The satellites would be integrated with the launch vehicle on June 16 and heat shield check would be performed on June 18.

Known for its expertise in launching PSLVs with smaller payloads up to 1,600kg, the national space agency Isro has earned a name in the space industry, attracting huge sum to the country as foreign exchange.

India to launch five foreign satellites for a fee June 30

Chennai, June 21 - India will put into space five foreign satellites June 30 using its Polar Satellite Launch Vehicle (PSLV) rocket for an undisclosed sum, said the Indian space agency.
In a statement issued on Friday, the Indian Space Research Organisation (ISRO) said a PSLV launch is scheduled June 30 from its rocket port at Sriharikota in Andhra Pradesh, around 80 km from here.
The rocket which is expected to blast off at 9.49 a.m. will carry a 714-kg French earth observation satellite SPOT-7; 14-kg AISAT of Germany; NLS7.1 (CAN-X4) and NLS7.2 (CAN-X5) from Canada each weighing 15 kg; and the 7-kg VELOX-1 of Singapore.
These five satellites are being launched under commercial arrangements that Antrix Corporation has entered into with the respective foreign agencies.
All the five satellites have been integrated with the rocket and the final checks are progressing, ISRO said.
According to ISRO, the Mission Readiness Review (MRR) Committee and the Launch Authorisation Board (LAB) are meeting June 27, to review the progress of prelaunch activities.
After the clearance from LAB, the 49-hour count-down for the mission will commence at 8:49 a.m June 28.
Quelle: IANSlive
.

The launch campaign is progressing smoothly for a multiple-satellite mission from Sriharikota on June 30. A Polar Satellite Launch Vehicle (PSLV-C23) of the Indian Space Research Organisation (ISRO) will liftoff from the spaceport on the island in Andhra Pradesh at 9.49 a.m. on that day and put into orbit five foreign satellites.
M.C. Dathan, Director, Liquid Propulsion Systems Centre (LPSC), ISRO, said the launch campaign was progressing well and all the tests done on the vehicle had given satisfactory results. The five satellites were in good health and they had been mated with the launch vehicle. It is a core-alone PSLV version, without the strap-on booster motors around the first stage, which would put the satellites into orbit, added Mr. Dathan.
The heaviest of the five satellites is the 714-kg earth observation satellite called SPOT-7 from France.
The other satellites are: a 14-kg AISAT from Germany, NLS7.1 (CAN-X4) and NLS7.2 (CAN-X5) from Canada, each weighing 15 kg and seven kg, and the 7-kg VELOX-1 of Singapore.
These satellites are for remote-sensing or testing their various instruments, an ISRO official said.
Quelle: The Hindu
. 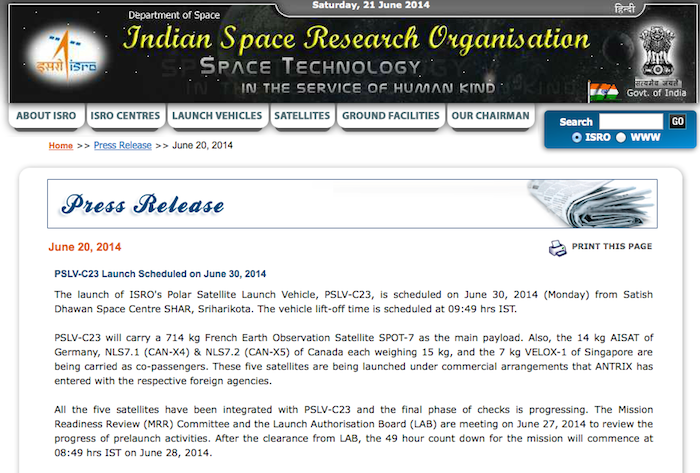 Quelle: ISRO
.
Update: 28.06.2014
.
Weltraummüll kann PSLV-C23 Start am Montag drei Minuten verspäten
CHENNAI: There may be a three-minute delay in the launch of its Polar Satellite Launch Vehicle PSLV-C23 from the Sriharikota spaceport on Monday, owing to the probability of some space debris getting in the way of the rocket, Indian Space Research Organisation chairman K Radhakrishnan told TOI.
"The mission readiness review committee, which met on Friday morning, considered the probability of the rocket encountering space debris and some of the members recommended a slight delay in the time of lift-off. So the launch may now happen at 9.52am, instead of at 9.49am as planned earlier," Radhakrishnan said.
Prime Minister Narendra Modi will be witnessing the exclusive commercial launch of PSLV-C23 that would carry five foreign satellites to orbit.
India is a member of a consortium of space-faring nations that share information on space debris collated and uploaded by Nasa.
Around 13,000 objects categorised as space debris (left behind by parts of old satellites and left-overs from other rocket parts) have been counted in the low-earth orbit where satellites are launched.
"Space debris pose the threat of collision with the rocket en route its journey to space or during the injection of satellites. Gauging their proximity and velocity, we alter the launch time," the Isro chairman said. By delaying the launch by a few minutes, the rocket evades the debris by thousands of kilometers.
On October 12, 2011, Isro delayed the launch of PSLV-C18 by a minute to avoid space debris. The rocket later injected four satellites including the Indo-French weather satellite Megha-Tropiques into a safe orbit.
PSLV-C23 would carry SIPCOT-7, a 714kg French satellite, as the main payload. It will also launch the 14kg AISAT of Germany, Canadian satellites CAN-X4 and CAN-X5, each weighing 15kg and VELOX-1, a 7kg satellite of Singapore.
Isro has launched 26 PSLVs so far, and the last 25 launches have been successful.
Quelle: TET
.
The 49 hour countdown for the launch of PSLV C23 has just begun.
. 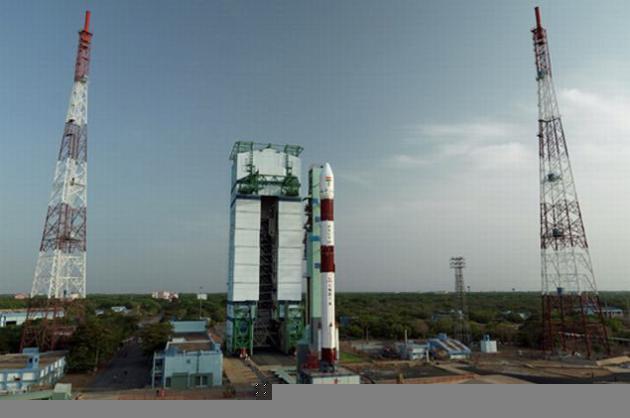 SRO has delayed the launch by three minutes at 9.52 a.m. IST on June 30 due to the probability of space debris movement.
The 49-hour countdown for launch of ISRO’s PSLV-C23 carrying a French Earth observation satellite along with four others from Singapore, Canada and Germany on June 30, commenced at the spaceport of Sriharikota on Saturday.
“The 49-hour countdown of PSLV-C23 Mission started at 08:52 AM at Satish Dhawan Space Centre at Sriharikota,” ISRO said.
The Launch Authorisation Board (LAB), which met on Friday at Sriharikota, cleared the launch, paving the way for the start of the countdown.
The launch, originally fixed at 9.49 a.m. IST on June 30, has been rescheduled for 9.52 a.m. due to the probability of space debris movement during the launch window.
Prime Minister Narendra Modi is set to witness the launch of the French satellite, SPOT-7 and the co-passenger spacecraft from Canada, Germany and Singapore from the first launch pad at Satish Dhawan Space Centre at Sriharikota, about 100 km from Chennai.
SPOT-7 is an Earth observing satellite, similar to Indian Remote Sensing System (IRSS).
ISRO has so far launched 35 satellites of foreign countries onboard its workhorse, the Polar Satellite Launch Vehicle.
Quelle: The Hindu
.
Update: 29.06.2014
.
Indian rocket's Monday launch countdown on track 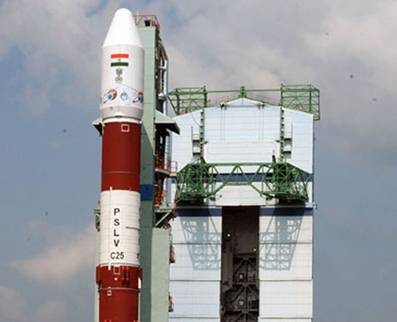 Chennai, The countdown for the launch of an Indian rocket Monday morning that will carry five foreign satellites is progressing smoothly, the Indian space agency ISRO said on Sunday.
According to Indian Space Research Organisation (ISRO), the countdown for the launch of rocket Polar Satellite Launch Vehicle (PSLV-C23) on Monday 9.52 a.m is progressing smoothly.
The 49-hour countdown for the rocket’s flight started Saturday morning at India’s rocket port in Sriharikota in Andhra Pradesh around 80 km from here.
Prime Minister Narendra Modi is scheduled to witness the rocket launch.
This is the first space mission after the National Democratic Alliance (NDA) government's coming to power.
The five satellites are from four countries - France, Germany, Canada and Singapore.
The rocket's main luggage will be the 714-kg French earth observation satellite SPOT-7. The other satellites are: 14-kg AISAT of Germany; NLS7.1 (CAN-X4) and NLS7.2 (CAN-X5) from Canada each weighing 15 kg; and the seven-kg VELOX-1 of Singapore.
The satellites are being launched under commercial arrangements that Antrix Corporation has entered into with the respective foreign agencies.
ISRO officials are hoping that the agency’s around 20-minute crucial space mission will turn out to be a grand success.
As per the mission plan, the rocket will first release its heaviest and most costly luggage -SPOT-7 - at around 18 minutes after the launch.
India had launched another French satellite - the 712-kg SPOT-6 in 2012. The latest in the SPOT family of satellites is the SPOT-7.
Incidentally SPOT-7 is the heaviest foreign satellite to be carried by PSLV.
The ejection of SPOT-7 will be followed by AISAT (Germany), NLS7.1, NLS7.2 (both from Canada) and VELOX-1 (Singapore).
Starting from 1999, India has launched 35 foreign satellites till date using its PSLV rocket. The successful launch of five satellites Monday would take the tally to 40.
India began its space journey in 1975 with the launch of Aryabhatta - using a Russian rocket - and till date it has completed over 100 space missions including missions to the Moon and Mars.
Quelle: IANSlive
.
Update: 30.06.2014
.
Successfully Launches French Earth Observation Satellite- SPOT 7 and four other co-passenger satellites from SDSC SHAR, Sriharikota
. 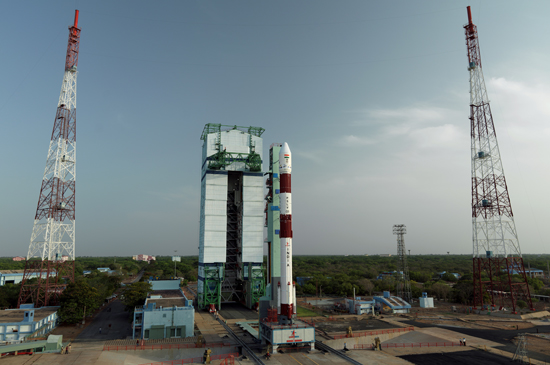 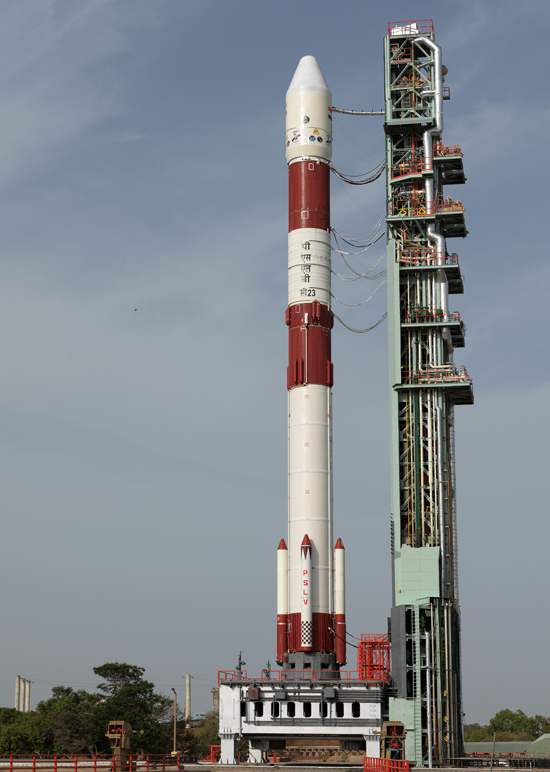 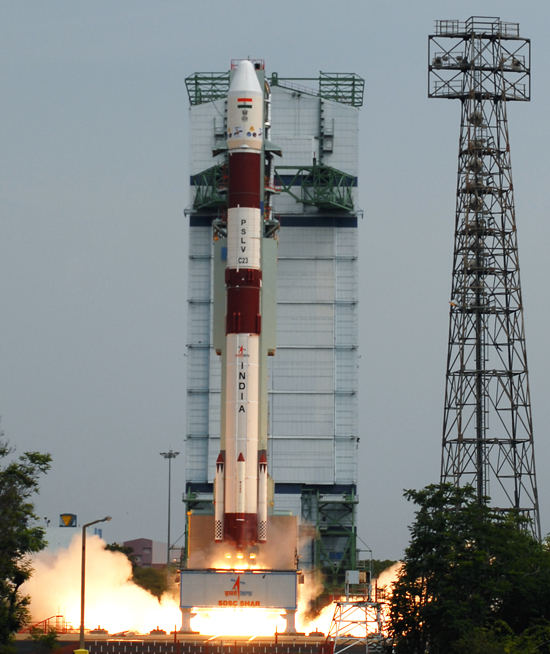 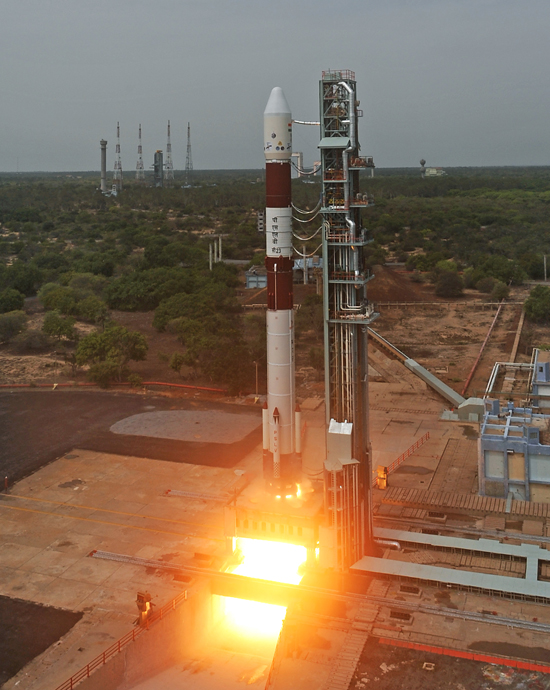 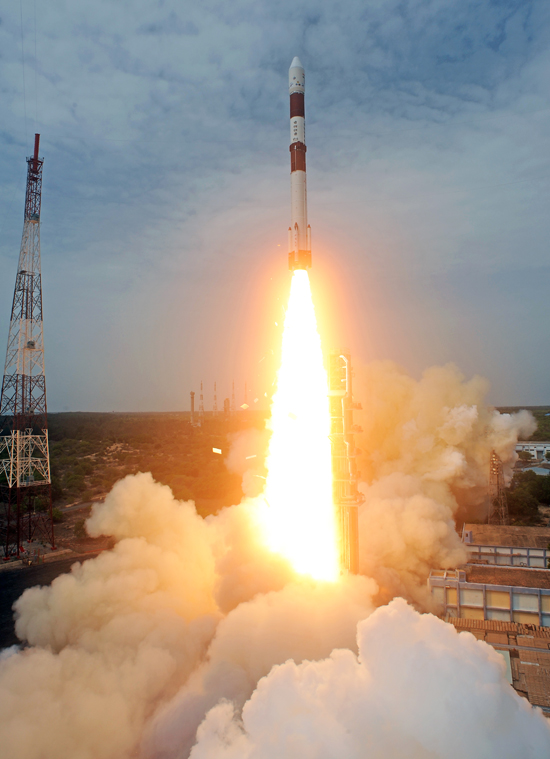 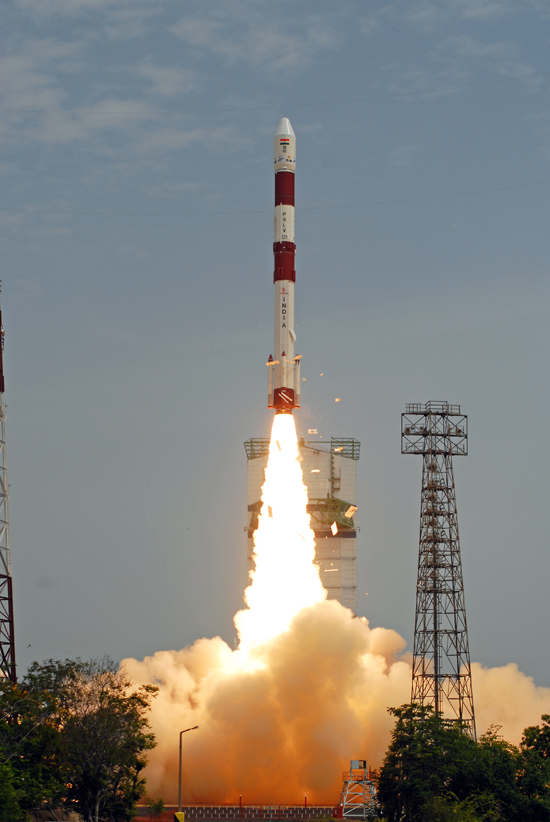