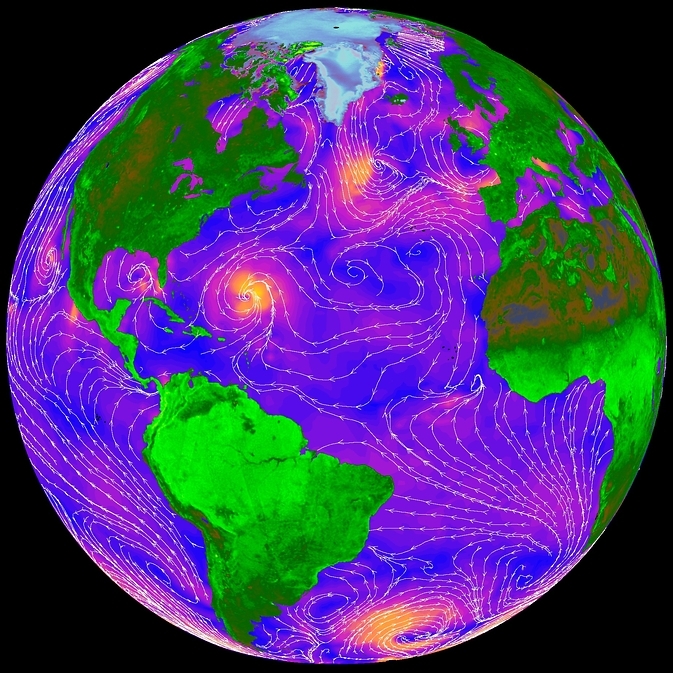 Today (June 19) marks the 15th anniversary of the launch of NASA's QuikScat, a satellite sent for a three-year mission in 1999 that continues collecting data. Built in less than 12 months, QuikScat has watched ocean wind patterns for 15 years and improved weather forecasting worldwide. Despite a partial instrument failure in 2009, it provides calibration data to international partners.
On this anniversary, the mission's team is preparing to calibrate ISS-RapidScat, the successor that will maintain QuikScat’s unbroken data record. After its launch in a few months, RapidScat will watch ocean winds from the International Space Station (ISS) for a two-year mission.
Much like QuikScat, ISS-RapidScat was built in less than two years and at a fraction of its predecessor’s budget. Both missions are testaments to ingenuity, craftsmanship and speedy construction in the name of improving our understanding of Earth’s winds.
“Both ISS-RapidScat and QuikScat came about to react quickly to the failure of another spaceborne instrument,” said Ernesto Rodriguez, project scientist for the ISS-RapidScat mission at NASA’s Jet Propulsion Laboratory, Pasadena, California. “What differentiates these missions is cost and risk: RapidScat had to be built with a fraction of the QuikScat budget, and the mission accepted a much riskier approach,” Rodriguez said. RapidScat was constructed primarily from QuikScat’s spare parts and will be the first scatterometer to berth on the International Space Station.
Scatterometers help scientists estimate the speed and direction of winds at the ocean’s surface by sending microwave pulses to Earth’s surface. Strong waves or ripples scatter the microwaves, sending some of them back toward the scatterometer. Based on the strength of this backscatter, scientists can estimate the strength and direction of the wind at the ocean’s surface.
Scatterometer data are critical for observing global weather patterns. They also help ocean fishermen decide where to fish, ship captains choose shipping lanes and researchers track hurricanes, cyclones and El Niños.
“The usefulness of this wind measurement is enormous,” said JPL’s Jim Graf, who served as project manager for the QuikScat mission in the 1990s and is now the deputy director of JPL’s Earth Science and Technology Directorate. “One of the dominant factors in understanding the climate is to assess what is happening in the ocean circulation. And one of the dominant factors in ocean circulation is the wind at the surface, which is what scatterometers measure.”
NASA launched its first scatterometer satellite in 1978 and its second instrument, the NASA Scatterometer (NSCAT), on a Japanese satellite in 1996. Each lasted less than a year, but collected hundreds of times more data about ocean winds than ships or buoys and improved weather forecasts from the National Oceanic and Atmospheric Administration (NOAA).
But the spacecraft carrying NSCAT malfunctioned in 1997. Immediately, a team of JPL scientists and engineers raced to get a scatterometer satellite back into space.
“We had the idea that a partially developed spacecraft bus could be mated with an advanced version of the instrument that was already under development, and we could get something up quickly. So we went to NASA, and they said, ‘Okay, let’s give it a shot, but we want you to be ready to go one year from the go-ahead,’” Graf said. “And so we took off running, and we didn’t stop for a whole year.”
In that year, Ball Aerospace & Technologies Corp., Boulder, Colorado, built the QuikScat satellite bus while JPL finished the new SeaWinds scatterometer instrument. It launched in 1999. For the next decade, QuikScat made about 400,000 daily measurements of wind speed and direction. Over 15-mile (25-kilometer) segments of ocean, its measurements were detailed enough to estimate average wind speed within 6 feet (2 meters) per second.
The SeaWinds instrument on QuikScat used a rotating antenna to measure a swath of Earth’s surface 1,118 miles (1,800 kilometers) wide -- about the distance from Los Angeles to Seattle. As QuikScat flew, the rotations overlapped to cover more than 90 percent of Earth’s surface every day.
But by the end of 2009, long after the expected end of QuikScat’s mission, the lubricant coating the antenna’s bearings dried up. Instead of tracing a round swath on Earth’s surface, it pointed straight down and only watched the waves directly below it. Still, those data were sufficient to help calibrate newer satellites.
“Since 2009, we’ve been able to keep QuikScat operating quite successfully,” said QuikScat Project Manager Rob Gaston of JPL. “We used QuikScat’s highly successful backscatter measurements, which were well understood and had demonstrated stability, as a calibration standard for many instruments, including other scatterometers.” The European Space Agency and Indian Space Research Organization have both used QuikScat data to calibrate scatterometers in the last five years.
QuikScat’s final task will be to calibrate its successor, RapidScat. The satellite will continue collecting data until April 2015, when it will be decommissioned after nearly 16 years in orbit.
RapidScat, like QuikScat, was built in a fraction of the timeline for most missions. The two missions even share hardware: JPL engineers used SeaWinds test parts to build much of RapidScat, which also uses a rotating dish antenna.
RapidScat will launch aboard a SpaceX Dragon resupply mission this summer. Flying in the space station’s orbit means RapidScat will spend more time observing Earth's tropics than previous scatterometer satellites, which orbited farther north and south.
“RapidScat will be able to, for the first time, map the evolution of winds as the day progresses, which is important for understanding how clouds and precipitation develop, especially in the tropics, which are key regions in Earth's climate system,” Rodriguez said. “It will provide a common reference to tie all of these measurements together.”
Together with scatterometers managed by India and Europe, RapidScat will maintain the continuous climate record QuikScat began while adding its own unique perspective from orbit.
Quelle: NASA
« Zum vorherigen Eintrag Zum nächsten Eintrag »
3038 Views
Created with page4