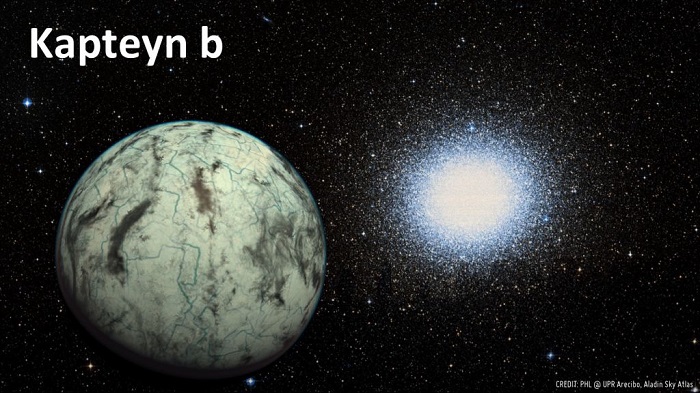 Artistic representation of the recently-discovered potentially habitable world Kapteyn b, with the globular cluster Omega Centauri in the background. It is believed that the Omega Centauri is the remaining core of a dwarf galaxy that merged with our own galaxy billions of years ago bringing Kapteyn’s star along. Credit/Caption: PHL @ UPR Arecibo, Aladin Sky Atlas.

A new generation of ground and space-based observatories that have come online during the last decade, has helped to kick exoplanet research into high gear with new discoveries of exoplanets today announced almost at a weekly basis. Following on the heels of the unexpected discovery of a heavyweight ‘Mega-Earth’, that was reported in a previous AmericaSpace article earlier this week, an international team of astronomers has announced the discovery of two nearby ‘Super-Earth’ worlds orbiting an 11-billion year-old red sub-dwarf star at a distance of 12.7 light-years away. More interestingly, one of the newly discovered exoplanets is found to lie inside the star’s habitable zone, making it the oldest possibly habitable exoplanet known to date.

Traditionally being overlooked by astronomers in their search for life in the Universe, red dwarfs are by far the biggest stellar population in the Milky Way, accounting for approximately 75 percent of the galaxy’s total number of stars. Much smaller in size and less luminous and massive than the Sun, they burn their hydrogen fuel at a very slow rate, which allows them to have lifespans of up to many trillions of years. One of the thousands such stars that are located in the Sun’s wider neighborhood, is Kapteyn’s Star, a red sub-dwarf that lies approximately 12.7 light years away in the direction of the southern constellation of Pictor. An otherwise dim and inconspicuous object, Kapteyn’s Star soon became famous following its discovery in 1897 because of its observed very high proper motion across the sky of 8.7 arcseconds per year, making it the highest of any known stellar object at the time, until the discovery of Barnard’s Star in 1916. With a mass and size approximately one-third that of the Sun and an abundance of heavy elements less than 10 percent solar, Kapteyn’s Star was, as most red dwarfs, historically seen as a poor candidate for hosting any planets and habitable environments. 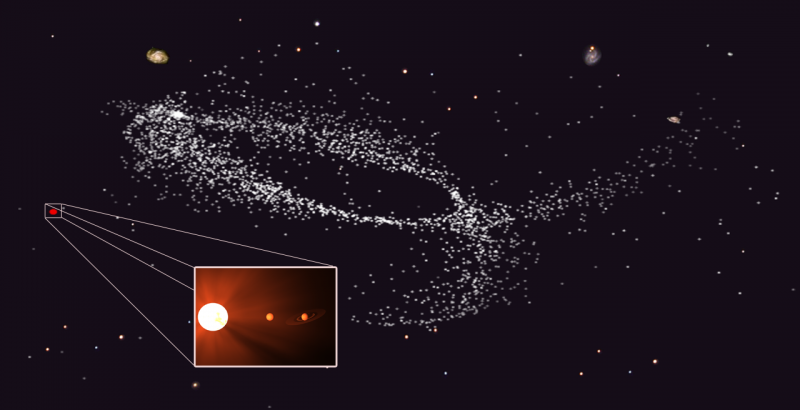 The superior sensitivity of the latest generation of ground-based instruments, has allowed astronomers to discover a wealth of exoplanets (most of them in multi-planetary systems) around red dwarfs, while overturning our conventional notions and expectations regarding planetary formation and evolution processes around metal-poor stars. In a new study that has been accepted for publication in the Monthly Notices of the Royal Astronomical Society, a team of researchers led by Dr Guillem Anglada-Escudé, a Lecturer at Queen Mary University of London’s School of Physics and Astronomy, have announced the discovery of two ‘Super-Earths’ orbiting Kapteyn’s Star, making them some of the oldest known extrasolar worlds to date.

The new discoveries were made with the help of the radial velocity method, which looks for the periodic shifts of certain spectral lines in a star’s light that are caused by the gravitational tug of invisible planets which orbit the star. The research team took a series of radial velocity measurements of Kapteyn’s Star’s light between May and December 2013 using the High Accuracy Radial Velocity Planet Searcher, or HARPS, a high-resolution spectrograph mounted on ESO’s 3.6m telescope at the La Silla Observatory in Chile, which clearly revealed the presence of two distinct signals, indicating the presence of two high-mass planets. In order to confirm these findings, the team combined its observations with a series of previous ones that had been made with HARPS, as well as with the more advanced High Resolution Echelle Spectrometer, or HIRES, at the Keck Observatory in Hawaii and the Planet Finding Spectrograph, or PFS, at the Las Campanas Observatory in Chile. “We were surprised to find planets orbiting Kapteyn’s star”, says Dr Anglada-Escudé. “Previous data showed some moderate excess of variability, so we were looking for very short period planets when the new signals showed up loud and clear.”

Comparison of the relative size of the orbits and the planets of Kapteyn’s Star and the inner planets of our Solar System. Planets are magnified x100 and stars x10 with respect to the orbit scale for clarity. Image Credit/ Caption: PHL @ UPR Arecibo

Even though the radial velocity method can only give some rough measurements of an exoplanet’s properties like minimum mass and orbital period, it nevertheless allows astronomers to make some educated guesses regarding the planet’s overall structure. The observations by Dr Anglada-Escudé’s team, have shown that both of the newly discovered planets are ‘Super-Earth’s, which are worlds whose masses can be up to 10 times that of the Earth. More importantly, the first one, called Kapteyn b, was found to lie inside its star habitable zone where conditions are just right for liquid water to exist on its surface. “The planet known as Kapteyn b has a mass at least five times that of Earth’s and orbits the star every 48.6 days – this is an orbit where it might have liquid water”, says Dr. Mikko Tuomi, a Research Fellow at the University of Hertfordshire’s Centre for Astrophysics Research, in the UK, and co-author of the study. The second planet, called Kapteyn c, was found to have a mass at least seven times that of Earth and an orbital period of 121.5 days which puts it well outside of the star’s habitable zone. “We think it’s too cold to support liquid water” adds Tuomi.

Such orbital periods would put both of Kapteyn’s star’s planets well inside the orbit of Venus in our Solar System, something that would surely make them as inhospitable as Earth’s ‘twin sister’. Yet, due to the substantially lower luminosity of red dwarfs compared to that of the Sun, the habitable zones around these stars are found much closer in than that of our own Solar System. For many astronomers, the extreme environments around many red dwarfs during their early years of development, characterized by the eruptions of gigantic coronal mass ejections, high variability and a constant stream of lethal X-ray and ultraviolet radiation, make these stars unsuitable for life. Yet, a growing number of studies in recent years, have suggested that red dwarfs may ultimately be some of the best types of stars to search for exoplanets and habitability. As detailed in a previous AmericaSpace article, a past statistical analysis that was done by a research team led by Dr. Mikko Tuomi, had concluded that habitable ‘Super-Earths’ may be rather common around red dwarf stars. In addition, further studies had shown that the conditions needed to sustain life, could be found well beyond a star’s habitable zone, making otherwise inhospitable worlds more conducive to life. “Finding a stable planetary system with a potentially habitable planet orbiting one of the very nearest stars in the sky is mind-blowing”, says Pamela Arriagada, a Postdoctoral Fellow at the Carnegie Institution’s Department of Terrestrial Magnetism in Washington and member of Anglada-Escudé’s team. “This is one more piece of evidence that nearly all stars have planets, and that potentially habitable planets in our Galaxy are as common as grains of sand on a beach.” 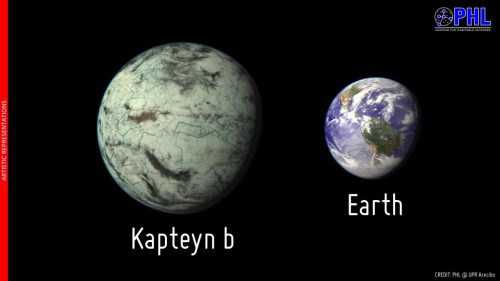 Artistic representation of the potentially habitable exoplanet Kapteyn b as compared with Earth. Kapteyn b is represented here as an old and cold ocean planet with a network of channels of flowing water under a thin cloud cover. The relative size of the planet in the figure assumes a rocky composition but could be larger for a ice/gas composition. Image Credit/Caption: PHL @ UPR Arecibo

Another very interesting aspect of Kapteyn’s Star, besides the prospect of habitability of its newly discovered exoplanets, is the origin of the star itself. Astrometric studies have found that it shares the same retrograde motion around the center of the Milky Way with a few dozen other stars, which are collectively called the Kapteyn group. In addition, these stars are not orbiting the galactic center inside the Milky Way’s spiral arms like the Sun, but they originate from the spherical Galactic halo that surrounds the Milky Way’s main disk, while briefly intersecting it in their long, elliptical orbits around the center. Furthermore, comprehensive spectroscopic analysis of most of the Kapteyn group’s stellar population has revealed the it shares the same elemental abundance with many of the millions of old stars that comprise the 12-billion-year-old Omega Centauri, the largest globular cluster in the galaxy located 15,800 light-years away in the constellation of Centaurus.

Astronomers have long regarded Omega Centauri as being the remains of a dwarf galaxy that collided with and was absorbed by the Milky Way in the distant past. Computer simulations coupled with the astrometric and chemical measurements of the Kapteyn group’s stars, have suggested that the latter’s current orbits have been the result of this ancient collision. “The age of Kapteyn star can be inferred from its membership to the Galactic halo and peculiar element abundances”, writes Dr. Anglada-Escudé’s team in its study. “The current hierarchical Milky Way formation scenario suggests that streams of halo stars were originated as tidal debris from satellite dwarf galaxies being engulfed by the early Milky Way. This scenario is supported by the age estimations of the stars in the inner halo (10–12 billion years old) and globular clusters. [Previous studies] established the existence of such high-velocity, metal-poor moving groups in the solar neighborhood. Kapteyn’s star is the prototype member of one of these groups…The origin of Kapteyn’s star within a merging dwarf-galaxy sets its most likely age around the young halo’s one (> 10 billion years) and should not be older than 13.7 billion years, which is the current estimate of the age of the Universe”. 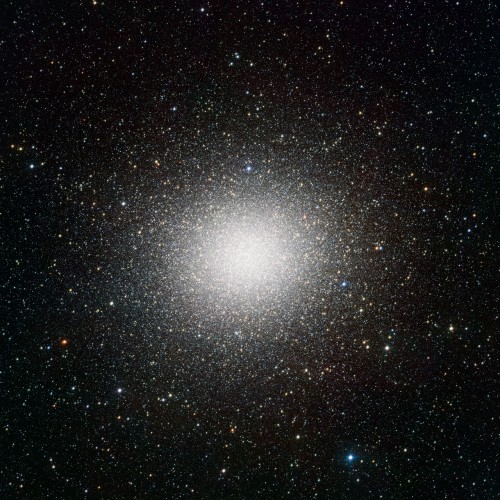 The Omega Centauri globular cluster, photographed by the VLT Survey Telescope that was recently installed at ESO’s Paranal Observatory in Chile. Previous studies have indicated that the globular cluster is Kapteyn’s Star place of origin. Image Credit: ESO/INAF-VST/OmegaCAM. Acknowledgement: A. Grado/INAF-Capodimonte Observatory

Since Omega Centauri is thought to be Kapteyn’s star place of origin, scientists estimate that its planets must be approximately 11.5 to 12 billion years old, thus making Kapteyn b not only the oldest known possibly habitable exoplanet to date, but along with Kapteyn c, the first that might have originated from another galaxy, outside of the Milky Way as well. “It does make you wonder what kind of life could have evolved on those planets over such a long time”, says Anglada-Escudé. “This discovery is very exciting”, adds Dr. Richard Nelson, Professor of Astronomy and Mathematics at Queen Mary University of London’s School of Physics and Astronomy, while commenting on the recent findings. “It suggests that many potentially habitable worlds will be found in the next years around nearby stars by ground-based and space-based observatories, such as PLATO. Until we have detected a larger number of them, the properties and possible habitability of the near-most planetary systems will remain mysterious.”

With the launch of ESA’s PLATO observatory and the joint NASA/ESA James Webb Space Telescope, scheduled to take place within the next few years, the next generation of space-based instruments will open their electronic eyes to the Cosmos, aiming to solve these long-standing mysteries.

What will they find?