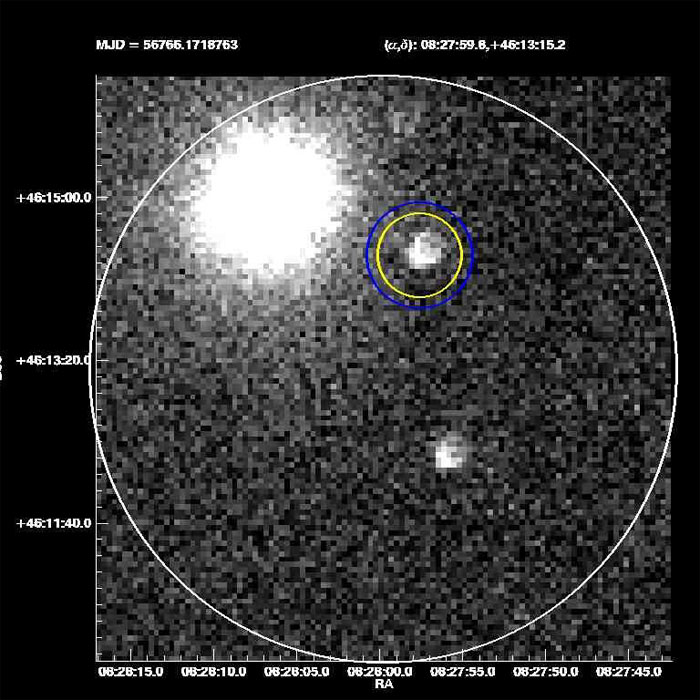 Known as a gamma-ray burst, the intense light captured in the night sky resulted from one of the biggest and hottest explosions in the universe, occurring shortly after the Big Bang.

Intense light from the enormous explosion of a star more than 12 billion years ago -- shortly after the Big Bang -- recently reached Earth and was visible in the sky.
Known as a gamma-ray burst, light from the rare, high-energy explosion traveled for 12.1 billion years before it was detected and observed by a telescope, ROTSE-IIIb, owned by Southern Methodist University, Dallas.
Gamma-ray bursts are believed to be the catastrophic collapse of a star at the end of its life. SMU physicists report that their telescope was the first on the ground to observe the burst and to capture an image, said Farley Ferrante, a graduate student in SMU's Department of Physics, who monitored the observations along with two astronomers in Turkey and Hawaii.
Recorded as GRB 140419A by NASA's Gamma-ray Coordinates Network, the burst was spotted at 11 p.m. April 19 by SMU's robotic telescope at the McDonald Observatory in the Davis Mountains of West Texas.
Gamma-ray bursts are not well understood by astronomers, but they are considered important, Ferrante said.
"As NASA points out, gamma-ray bursts are the most powerful explosions in the universe since the Big Bang," he said. "These bursts release more energy in 10 seconds than our Earth's sun during its entire expected lifespan of 10 billion years."
Some of these gamma-ray bursts appear to be related to supernovae, and correspond to the end-of-life of a massive star, said Robert Kehoe, physics professor and leader of the SMU astronomy team.
"Gamma-ray bursts may be particularly massive cousins to supernovae, or may correspond to cases in which the explosion ejecta are more beamed in our direction. By studying them, we learn about supernovae," Kehoe said.
Scientists weren't able to detect optical light from gamma-ray bursts until the late 1990s, when telescope technology improved. Among all lights in the electromagnetic spectrum, gamma rays have the shortest wavelengths and are visible only using special detectors.
Gamma-ray bursts result from hot stars that measure as enormous as 50 solar masses. The explosion occurs when the stars run out of fuel and collapse in on themselves, forming black holes.
Outer layers detonate, shooting out material along the rotation axis in powerful, high-energy jets that include gamma radiation.
As the gamma radiation declines, the explosion produces an afterglow of visible optical light. The light, in turn, fades very quickly, said Kehoe. Physicists calculate the distance of the explosion based on the shifting wavelength of the light, or redshift.
"The optical light is visible for anywhere from a few seconds to a few hours," Kehoe said. "Sometimes optical telescopes can capture the spectra. This allows us to calculate the redshift of the light, which tells us how fast the light is moving away from us. This is an indirect indication of the distance from us."
Observational data from gamma-ray bursts allows scientists to understand structure of the early universe
To put into context the age of the new gamma-ray burst discoveries, Kehoe and Ferrante point out that the Big Bang occurred 13.81 billion years ago. GRB 140419A is at a red shift of 3.96, Ferrante said.
"That means that GRB 140419A exploded about 12.1 billion years ago," he said, "which is only about one-and-a-half billion years after the universe began. That is really old."
Armed with images of the burst, astronomers can analyze the observational data to draw further conclusions about the structure of the early universe.
"At the time of this gamma-ray burst's explosion, the universe looked vastly different than it does now," Kehoe said. "It was an early stage of galaxy formation. There weren't heavy elements to make Earth-like planets. So this is a glimpse at the early universe. Observing gamma-ray bursts is important for gaining information about the early universe."
GRB 140419A's brightness, measured by its ability to be seen by someone on Earth, was of the 12th magnitude, Kehoe said, indicating it was only 10 times dimmer than what is visible through binoculars, and only 200 times dimmer than the human eye can see, Kehoe said.
"The difference in brightness is about the same as between the brightest star you can see in the sky, and the dimmest you can see with the naked eye on a clear, dark night," Kehoe said. "Considering this thing was at the edge of the visible universe, that's an extreme explosion. That was something big. Really big."
SMU telescope responded to NASA satellite's detection and notification
SMU's Robotic Optical Transient Search Experiment (ROTSE) IIIb is a robotic telescope. It is part of a network of ground telescopes responsive to a NASA satellite that is central to the space agency's Swift Gamma-Ray Burst Mission.
When the Swift satellite detects a gamma-ray burst, it instantly relays the location. Telescopes around the world, such as SMU's ROTSE-IIIb, swing into action to observe the burst's afterglow and capture images, said Govinda Dhungana, an SMU graduate student who participated in the gamma-ray burst research.
SMU's ROTSE-IIIb observes optical emission from several gamma-ray bursts each year. It observed GRB 140419A just 55 seconds after the burst was detected by Swift.
Just days later, ROTSE-IIIb observed and reported a second rare and distant gamma-ray burst, GRB 140423A, at 3:30 a.m. April 23. The redshift of that burst corresponds to a look back in time of 11.8 billion years. ROTSE-IIIb observed it 51 seconds after the burst was detected by Swift.
"We have the brightest detection and the earliest response on both of those because our telescope is fully robotic and no human hands were involved," Ferrante said.
Ferrante, the first to check observations on GRB 140423A, is first-author on that gamma-ray burst. Tolga Guver, associate professor in the Department of Astronomy and Space Sciences at Istanbul University, Turkey, is second author. On GRB 140419A, Guver is first author and Ferrante is second.
The research is funded by the Texas Space Grant Consortium, an affiliate of NASA.
Quelle: Southern Methodist University